HAVANA, Dec 18 2012 (IPS) - “Child abuse merits a different, in-depth approach. The objective of this film is to make the problem visible and promote debate and reflection,” says Eric Corvalán, director of a documentary that required “breaking through walls.”

In the film “No es el camino” (This is not the way), prominent Cuban experts discuss child abuse. Social issues are nothing new to Corvalán. In 2008 he premiered “Raza” (Race), about the no-less thorny issue of racial discrimination.

That documentary won a number of awards, including the David Prize awarded by the University of Oriente, for its contribution to education. However, it has yet to be shown on Cuban television. 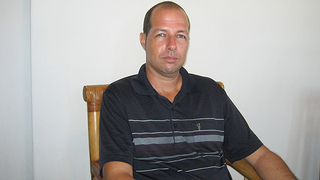 Eric Corvalán: “The 1975 family code was once cutting-edge, but it is now out-of-date.” Credit: Patricia Grogg/IPS

“When I asked why (it hasn’t been shown), they told me that it was a controversial issue, and that our society wasn’t ready to see it on television. If that was the case with ‘Raza,’ then I imagine that the same thing will happen with ‘No es el camino’,” the independent filmmaker, who is a member of the Cuban Audiovisual Association (ACAV), told IPS in this interview.

His documentary premiered in Havana on Sept. 25 as a demonstration of the commitment by the Oscar Arnulfo Romero Reflection and Solidarity Group to the U.N. secretary-general’s UNiTE to End Violence against Women campaign, which celebrates Orange Day on the 25th of each month.

Q: Why child abuse and not another issue for your second documentary?

A: Because it is an issue that has hardly been addressed. If we acknowledge that domestic violence exists, then we need to know what is going on with the children, who suffer the most. They cannot defend themselves, and they are subject to that violence in different ways: physical, psychological and sexual. Walking through the city, I have seen mothers and fathers who abuse their children in public.

Q: Where does this problem occur?

A: Mostly within the family. The abuser may be an uncle, a cousin, the mother or the father. They scold the child, use disparaging language, or shake or pull the child – as if these were educational methods. That’s why I made the documentary, for children and also for parents, other relatives and the world in general.

The documentary makes it clear that many institutions are working on this issue, but there is no follow-up on cases and no specific law exists. The Penal Code includes a very general reference to the normal development of children and women.

Q: But there is a Family Code.

A: That legislation dates back to 1975. Since then, three generations have gone by…and it hasn’t been changed. In its time, it was very advanced, but now it’s not. Child abuse merits an in-depth approach. For example, in situations of economic crisis, social inequalities increase and children are the most vulnerable.

Q: The documentary brings together a good group of specialists on the matter, but does not include the testimony of any children. Why?

A: They are not in the documentary directly, because in Cuba, if you don’t have official authorisation you can’t interview a child and place him or her onscreen. The objective of this material was to make the phenomenon visible and to protect children. Before interviewing the specialists, I visited several communities in the city and talked to many boys and girls. I realised that the problem is cause for concern.

Children are very sincere, and you can find out about anything talking to them. Both boys and girls are very sensitive and they feel and suffer from problems without having anybody to turn to.

There is no infrastructure in Cuba where children can go and make a complaint. What is needed is a daily education campaign, teaching parents how to listen to their children and to know about their obligations to them.

Q: Do you feel that child abuse should not exist in a society like Cuba’s?

A: When we talk about violence in Cuba, we immediately begin comparing it to other countries, as a defence mechanism. There is less violence here than in other places, but it does exist. “A single boy or girl who is mistreated in this country is a serious problem for us,” said one of the people interviewed, Dr. Cristóbal Martínez, of the national children’s psychiatry group.

Our society is machista. We are violent and loud, but at the same time we are very humane and have a high educational level. These are tremendous contradictions, and in the face of a phenomenon like this, you wonder why it exists and what is being done to solve it.

Q: The documentary premiered in September. Why hasn’t it been screened since?

A: In May 2013, it will compete in the Santiago Álvarez (documentary film festival) in Santiago de Cuba. It will also be shown in international festivals in Chile, Argentina, Brazil, France, Canada, and the United States. Moreover, I hope that it will be used as a tool for studies by international and Cuban organisations.

Q: What was your greatest challenge in taking on such a sensitive social issue?

A: The main challenge was simply to do it – that is, to break through the walls of censorship and fear. I’m using these big words because making a film about violence of any kind is very difficult. Another main challenge now is for people to see it, and discuss and debate it. The idea of issues being discussed is now being promoted in our country, including at the level of the state.