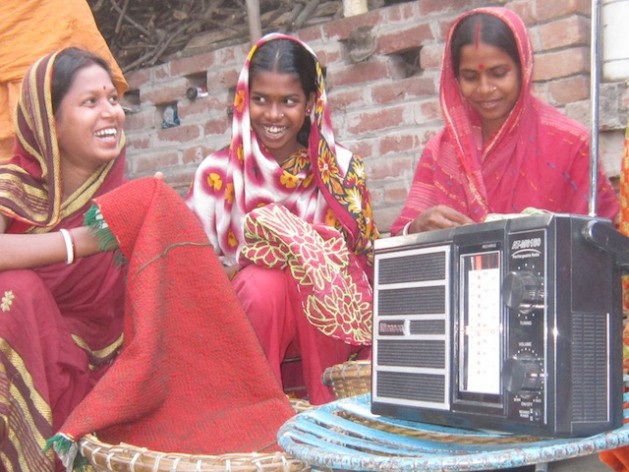 CHAPAINAWABGANJ, Bangladesh, Feb 21 2013 (IPS) - The sun is just beginning its descent as a knot of farmers gathers around a small, portable radio in the grounds of the Nachol Pilot High School in Bangladesh’s northwestern Chapainawabganj district, about 300 kilometres from the capital, Dhaka.

The voices of Kauser Ali and Dhiren Karmakaur — two farmers from Nachol who are sitting in a studio about 15 kilometres away from the crowd of eager listeners – come in clearly on the airwaves, welcoming their remote audience to ‘Krishi O Jibon’ (Agriculture and Life), a daily programme on Radio Mahananda.

The anchor begins by playing a popular song known as Gambhira, a blend of folk music performed in the native dialect by local artistes, before launching the farmers into a discussion about a common problem among this community of roughly 5,000 agriculturalists: pest attacks on maize crops.

I had a pest attack in my mustard field two years ago. Last season I avoided that by seeking advice in advance from experts who discuss these problems live on the air.” - Habibur Rahman, a local farmer in Bangladesh.
“The feeling here is absolutely electric,” says the anchor, Selim Kabir, a local farmer who uses this radio show to promote crop production in Chapainawabganj.

“Gambhira enlightens farmers about various aspects of agriculture,” Kabir told IPS, “so, we chose to use it throughout our programme, which delivers important messages and hosts live discussions on best practices to solve farm-related problems.”

Radio Mahananda, launched last April, has today become an indispensable communication tool in an almost entirely agriculture-dependent region, where illiteracy rates are as high as 50 percent.

The long fingers of development have not yet reached this part of the country, hundreds of miles from Bangladesh’s bustling industrial centres, where there is little infrastructure and few plans to build any.

Chapainawabganj lies partially within the 7,780-square-kilometre Barind region, an arid expanse of land located in northwestern Bangladesh. Here, extreme weather brought on by climate change has made crop production a huge challenge.

Characterised by an exceptionally high population density, Barind is also forced to contend with severe drought in the summer months, inadequate rainfall during the monsoon season, excessive withdrawal and depletion of groundwater, gradual loss in soil moisture and progressive deforestation.

In a bid to confront these challenges, the government set up the Agriculture Information Service (AIS), which resulted in the establishment of over 1,000 farmers’ clubs – each with between 30 and 50 members — in all 64 districts, to facilitate regular exchanges of information about boosting crop production and adapting traditional growing and planting cycles to a changing climate. 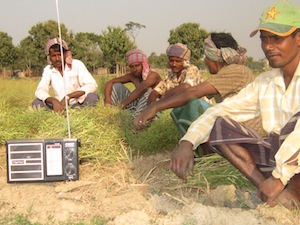 A group of farmers in northwestern Bangladesh tune into ‘Agriculture and Life’, a radio show on farming. Credit: Naimul Haq/IPS

Now, with the help of Radio Mahananda, the government initiative is having an even greater impact.

The rural community station reaches a 17-kilometre radius and helps farmers share their own crop research with listeners and even invites farmers to participate in studio discussions on capacity development, cultivating improved varieties of seeds, promoting use of organic fertilisers, using less water for irrigation and improving yields.

Ahmed Moin, producer of the 30-minute-long Krishi O Jibon show, told IPS, “Over 60 percent of our programmes are focused on developing agriculture. We use the benefits of radio transmission to build awareness and overcome crop production crises.”

“We have seven hours of daily programmes,” Hasib Hossain, chief executive officer of Radio Mahananda, told IPS, “and since Chapainawabganj is an important agricultural zone we design our programmes to maximise benefits to local farmers.”

Radio shows typically begin after three p.m. to enable farmers to gather together at the end of the workday and tune in live. The programmes are interspersed with useful tips on how to avoid pest attacks or use drought-resistant seeds.

Television is a rare luxury in this part of the country, and a high illiteracy rate among farmers makes it almost impossible to disseminate agriculture-related news and information in print – the radio shows offer an excellent alternative to farming communities, who can even tune in using their cell phones.

Habibur Rahman, a local farmer and regular listener from Delbari village, told IPS, “We certainly benefit from listening to the radio programmes. For instance, I had a pest attack in my mustard field two years ago. Last season I avoided that by seeking advice in advance from experts who discuss these problems live (on the air).”

Farmers are encouraged to participate and send queries directly to the radio office through phone calls or text messages.

There has been “huge enthusiasm among the farmers. Requests for advice keep pouring in and many have reported better grain harvests” after the radio prgrammes came into existence, according to Moin.

Mohammad Mosharaf Hossain, senior scientific officer of a local mango research institute, told IPS, “We… teamed up with Radio Mahananda recently to disseminate information on our research and received an unbelievable response.”

In 2013 alone the institute has developed four new varieties of sweet mango, popularised among the local farmers through radio programmes. Such information is crucial in Chapainawabganj, home to over 90 percent of Bangaldesh’s mango production, with hundreds of square kilometres dedicated to growing and harvesting the fruit.

“We participated in regular live discussions to inform and encourage mango farmers to use the new varieties of mango seeds known as BARI-6, 7, 8 and 9,” Hossain told IPS.

According to Enayet Khan, a local farmer, “Mahananda has united the local farmers and has played a huge role in contributing to boosting regional crop production.”