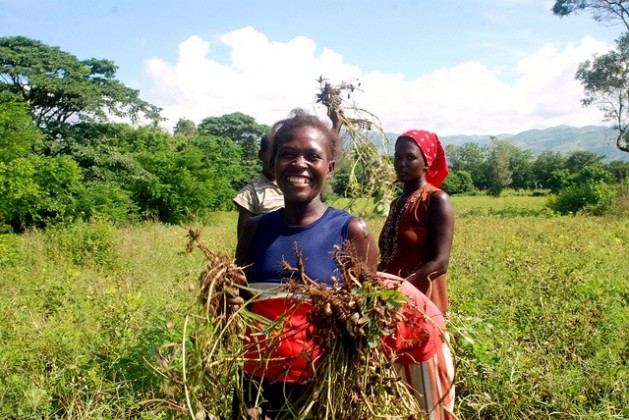 No-till farming could save the Caribbean from the impacts of climate change. Credit: Wadner Pierre/IPS

HAVANA, Feb 20 2013 (IPS) - No-till farming is a response to climate change that fits well with the needs of the Caribbean: it increases the ability to capture water, while withstanding both drought and excessive rains, says expert Theodor Friedrich, representative of the United Nation’s Food and Agriculture Organisation (FAO) in Cuba.

The Caribbean islands are in dire need of new techniques that can ensure food security amid the threats of climate change.

“I do not see why these islands cannot produce enough for their own consumption,” Friedrich said in an interview with IPS. “We have to produce more with less, and conservation agriculture is the basis of the strategy recommended by the FAO,” he added.

Q: What are the challenges posed by climate change to food security in the Caribbean region, especially the islands? 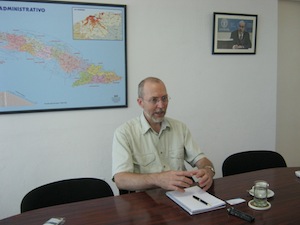 A: Weather events here have become more extreme. The rainy or dry seasons are more pronounced, and hurricanes that run frequently and regularly in the area are stronger and less calculable in intensity and impact.

These conditions obviously impact on agriculture, a slow productive sector that requires some environmental stability. Many of the Caribbean islands are mountainous, and poor land management, erosion and hurricanes cause natural disasters, which affect not only rural areas but the entire population.

Q: Would you say that the lack of sustainable agriculture increases the vulnerability?

A: There are structural (economic) problems in many of these countries that go beyond climate change. While in Cuba, the (U.S. economic) embargo presents an additional situation.

In general, the problems of the other islands are nearly the same: there is no domestic production of supplies or materials (needed) for agriculture. It is cheaper for countries to import agricultural products all at once, instead of producing based on inputs such as fertilisers and machinery – which also have to be imported.

It may also be that politics plays a more important role in these matters.

Q: How is it possible to keep up food production amid adverse climate conditions?

A: In theory it is possible in all terrain, if we implement proper (agricultural practices) that respect the environment and consider the threats of climate change. Today, this type of agriculture exists. I do not see why these islands cannot produce enough for their own consumption. The capabilities are there and require political support that encourages and creates suitable conditions for the production sector, which is also affected by fiscal and tax policies.

We need to produce more with less and conservation agriculture is the basis of the strategy (for the Caribbean region) recommended by the FAO.
We often see higher import taxes on fertiliser and machinery than taxes on imported vegetables and food products, which does not make sense if you want to improve local production.

Q: Should climate change and weather fluctuations be taken into account in development plans?

A: Yes, definitely. We need a political vision and policy instruments, but also technologies. That is one of FAO’s (key priorities): to develop and promote techniques that respond to the need to produce, despite the threats of climate change and the specific conditions of the Caribbean islands, where many agricultural areas are degraded by rain and erosion.

Q: What methods are most recommended in these cases?

A: A topic on which I have worked hard is farming without removing the soil, no-till farming, which responds to the need to improve the economic conditions of farmers, saving on fuel costs or the number of oxen.

It also (mitigates the impacts of) climate change, because (keeping the soil in place) increases the ability to capture water and withstand drought, with less problems for crops. (No-till farming also allows) soil to absorb excess water in the case of hurricanes, for example.

This is called conservation agriculture. It is based on three fundamentals: one is to not work the land, the second is to manage a permanent cover with mulch or plant debris, and the third is to diversify crops, in rotation, in frequency and in crop associations.

The key is not to work on the land mechanically, because what is needed is a tool to open a hole or a groove to put the seed in the ground and cover it – nothing more. Land worked like this can easily absorb well over 100 millimeters of rain per hour. There is no reason for flooding in times of hurricanes, because the water passes to underground areas and stays much longer in the earth.

Q: Does the FAO recommend this form of farming for small areas, or is it also useful on a larger scale?

A: It’s a change of the overall agricultural system. It can be applied in small or large extensions and in countries with different climates. It started in southern Brazil and in countries such as Canada and Australia. There the farmers, (in response to) wind, water erosion or drought, were forced to adopt this type of agriculture.

About 10 percent of the world’s agriculture is under this system. But in the Caribbean it is virtually unknown. We need to produce more with less and conservation agriculture is the basis of the strategy recommended by the FAO.

This form of farming helps mitigate climate change because it captures carbon in the soil and reduces methane emissions, when we apply it, for example, to rice.

Q: Does the FAO have special plans for Haiti? What is recommended?

A: With this type of agriculture we can respond to the situation in Haiti, which is the (most salient) example of the problems of degradation and mismanagement of irrigation systems. We will try to push, together with conservation agriculture, what here in Cuba is known as Systems of Rice Intensification.

In this technique the crop is not flooded: puddling is prevented, rice is planted (as) individual seeds in a very wide range and is transplanted from the seedlings after eight to 15 days in very small plants, before it has four leaves. (This results in) significant savings of seeds and water. Yields can easily exceed 10 tons per hectare.

These are very adaptive responses to situations like Haiti. Let’s see if we can start some changes, some kind of agricultural development in the country and move to a different management (system).