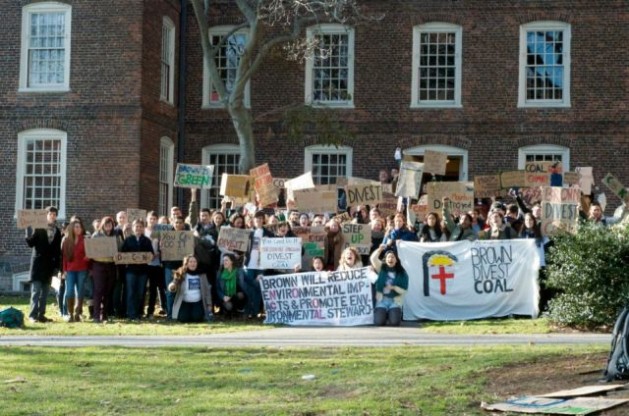 WASHINGTON, Apr 26 2013 (IPS) - Nearly a dozen U.S. cities have announced their interest in withdrawing municipal investments from fossil fuel companies, joining a fast-growing movement among colleges and universities that supporters say is allowing citizens concerned with environmental degradation and global climate change to act in lieu of federal action from the U.S. Congress.

On Tuesday, the San Francisco board of supervisors unanimously voted to recommend that the city’s retirement fund formally “divest” of any oil-and-coal holdings, some 583 million dollars’ worth. Next week, the nearby town of Berkeley is set to vote on a resolution that would request the enormous California state pension system to do the same.

"It doesn’t make sense to be spending money on my education if that money is also being spent on something that will threaten that future." -- Brown student Daniel Sherrell

Now, these initiatives have coalesced into a nascent movement. On Thursday, 11 mayors and city councils stated that they would be urging their cities to divest from investments in the 200 largest fossil fuel companies, while advocates say similar petitions are reportedly taking hold in 100 additional cities and states.

“This started [Thursday] with eight cities and by the end of the day we were already up to 11, and we’ve seen more interest since then,” James Irwin, a senior associate with the Mayors Innovation Project (MIP), a national network that is organising the new city divestment push, told IPS.  (The group’s municipal divestment guide can be found here.)

“That was after only a light first wave of outreach, so we expect to see more joining on now that the movement has begun,” he continues.

“This is part of building a moral argument that profiting from the wreckage of climate is wrong, that we shouldn’t be benefiting from climate change. Hopefully, this can be the start of a narrative highlighting how these companies are bad actors.”

By any measure, the divestment initiative has taken off surprisingly quickly. Substantive discussion began with regards to university investments only late last year, spearheaded particularly by the environmental advocacy group 350.org, and already petitions have reportedly sprung up at 300 institutions.

Expanding the movement to cities was an obvious next step, and related talks began in January. The following month, the city of Seattle – whose mayor has been at the forefront of the movement – announced that it would be encouraging its two-billion-dollar retirement fund to shed its stocks in companies that contribute to climate change.

“It’s the cities that will take the brunt of climate change, and that’s whether we get any federal or state funding – it’s up to us,” Larry MacDonald, mayor of the small town of Bayfield, Wisconsin, one of the municipalities that has pledged to divest its retirement fund, told IPS.

“A lot of the mayors I’ve spoken with feel very strongly that we only have one chance to act on this issue, and that we really can’t wait for federal or state officials. That said, of course, it’s also easier at the local level than at the federal level to make and act on these types of decisions.”

Thus far, the majority of cities that have expressed interest in the divestment initiative have been politically left-leaning. Yet MIP’s Irwin says he’s confident this is solely an early dynamic, and points to similar experiences in the past.

“We very much view this as the vanguard – it’s the liberal college towns that often lead on issues that end up becoming mainstream, for instance recycling and today’s focus on green energy,” he says.

“These are also the cities where the mayors feel the safest, but really there’s very little downside politically, especially if you look at this issue economically. Staying invested in fossil fuels won’t make sense, for instance, when federal authorities finally do get serious on climate change – say, by putting a price on carbon.”

Indeed, on Thursday the U.S. Senate Finance Committee published a white paper that discusses the possibility of instituting a national “carbon tax”. For now, however, such proposals are still considered dead on arrival at the federal level, but in that void local-level officials are increasingly seeing both an opportunity and a responsibility.

“We certainly believe that cities are where innovation is happening – the politics are less difficult and there is often a greater concentration of people who want to see action on certain issues,” Irwin says.

“Over the last decade, we’ve seen mayors taking many important steps on climate change, and those activities have trickled up to the national level. This new movement is clearly about laying the foundation for working on the larger state and federal levels later.”

Taking its inspiration from the anti-Apartheid movement of the 1980s, when some 155 U.S. schools came out against the South African government, the current divestment momentum began on college and university campuses. In addition to hundreds of schools currently being petitioned to withdraw their fossil fuel-related investments, dozens have reportedly started administrative processes to look more closely at the issue.

Endowments at these schools can be tens of billions of dollars each, and thus represent very significant potential leverage for those wanting to make both symbolic and substantive statements on behalf of environmental impact and climate change. Further, many of these institutions have notably forward-looking, altruistic mission statements.

“With Congress and international climate talks deadlocked, universities are at the front of this issue in that they have such high visibility – we have the opportunity to break this deadlock and create the political will necessary to help people take action on climate change,” Daniel Sherrell, a student leader with the Brown Divest Coal Campaign, at Brown University, told IPS.

“Right now, Brown’s investments in coal run counter to the university’s commitments to human rights. Those investments are also out of alignment with the science coming out of our own departments, which have consistently reinforced previous findings on human-caused climate change.”

A special committee on divestment recently suggested that Brown withdraw its investments in the country’s 15 largest coal companies. That recommendation may be voted upon by late May, and on Friday Sherrell participated in a preparatory subcommittee meeting to smooth the way ahead of the vote.

“Universities are about investing in both the future and the future of students – it doesn’t make sense to be spending money on my education if that money is also being spent on something that will threaten that future,” he says.

“More fundamentally, universities have long been a source of societal dialogue, and we’re trying to lead here. The more that cities, universities and individuals start standing up and saying this doesn’t make sense anymore, the more Congress will hear. This can shift the dialogue.”