UXBRIDGE, Canada, Apr 15 2013 (IPS) - “Be a climate-protection hero, not a climate victim” is the message energy experts from around the world are bringing to San Francisco Tuesday. 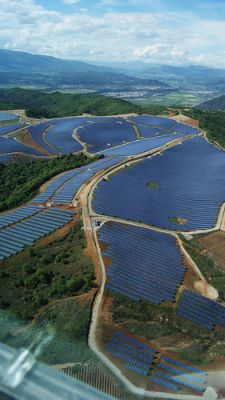 It is the first conference in U.S. history where the leaders in the 100-percent renewable energy revolution will share their knowledge and vision.

“There are powerful economic and environmental reasons for this transformation…and the sooner we get there the better for the climate,” says Diane Moss, organiser of the “Pathways to 100% Renewable Energy” conference at the FortMasonCenter Apr. 16.

“It’s already started but we need a serious global dialogue about how to successfully chart the course to a shared 100-percent renewable energy future,” Moss told IPS.

The clean-and-green-energy era is well underway in Denmark, Scotland, Iceland and in cities like Munich, Germany, Malmo, Sweden, and San Francisco, all of which are moving towards 100 percent renewable energy. Many towns in Europe have already have 100 percent pollution-free “eternal” energy sources from wind, solar, and biomass, she says.

In the United States, Greensberg, Kansas achieved 100-percent green energy in just a few years after the town was devastated by tornados in 2007. Dozens of other towns and cites totalling more than 40 million people have moved or are moving to 100 percent renewable, according to Go100% Renewable Energy.

In the first three months of this year, the U.S. added more wind and solar energy generating capacity than any other form of energy combined, although renewables remain a fraction of the grid – 13.2 percent in 2012, a little more than half consisting of hydropower.

“The next big step is create policies so communities and the general public directly benefit,” says Jose Etcheverry, co-chair, Sustainable Energy Initiative at YorkUniversity in Toronto.

“It’s not enough just to get a token payment, the public needs to be directly involved,” Etcheverry told IPS.

Coastal communities in Denmark have created trusts to finance renewable projects and in some cases green energy has become their main source of income, he said.

Using wind, water and sunlight to meet 100 percent or close to 100 percent of energy needs is both feasible and practical. StanfordUniversity energy expert Mark Jacobson published a detailed plan how New YorkState could reach that goal by 2030, IPS previously reported.

It’s not only doable but also “sustainable and inexpensive”, Jacobson told IPS

Air pollution, which comes mainly from burning coal, oil and gas, costs U.S. citizens hundreds of billions a year in healthcare, lost days at work and shortened lives. Globally, climate change is estimated to cost 1.2 trillion dollars a year from lost food production and extreme weather events, according to the DARA group, a non-governmental organisation based in Europe.

Much of the San Francisco conference will focus on the best local and regional policies such as feed-in-tariffs, green power purchasing and utility regulation, says Etcheverry.

Feed-in-tariffs are often portrayed as subsidies, which is inaccurate, says Paul Gipe, a wind energy expert from California. They are simply a negotiated price for energy from an energy provider to a user. The price has to be enticing enough for the provider or generator to make the capital investment.

“That is how the electricity sector in the U.S. functioned for years before de-regulation,” Gipe told IPS. “I’m opposed to subsidies, especially those the fossil fuel industry receives.”

According a new report from the International Monetary Fund (IMF), the fossil energy sector receives a “staggering 1.9 trillion dollars worldwide” a year in public subsidies, rebates and avoided tax on pollution. (1.9 trillion seconds is roughly 60,000 years) Removing those subsidies would strengthen incentives for “research and development in energy-saving and alternative technologies”, the IMF said.

None of this cheers the extraordinarily rich and powerful fossil energy industry. Nor are the nuclear industry and many big power utilities supporters of a renewable revolution. “Renewables threaten their business model and their profits,” Gipe says.

An intense public relations war is underway to persuade the public and political leaders that renewables are too expensive, unreliable, and not practical. Anti-wind movements have sprung up, sometimes in areas where there are no wind turbines.

“It’s actually an attack on renewables,” Gipe says. “Anti-wind advocates are often angry bullies who shout others down at meetings. My life has been threatened more than once.”

In California or Ontario, local utilities require 50 pages of paperwork for a homeowner to plug their rooftop solar panels into the electrical grid. And even then it could take a year or more to be connected. In Germany, the paperwork is four pages and residents have a legal right to connected as fast as possible, Gipe says.

To have a real opportunity to be climate heroes instead of climate victims, the silent majority will have to speak up and stand up to the propaganda and the bullies, he says.