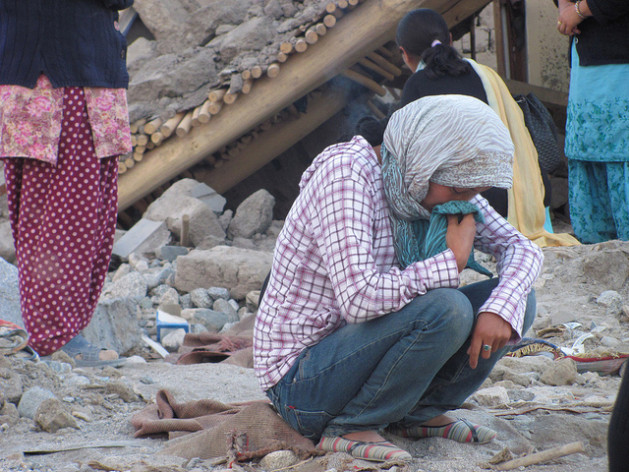 Stanzin Dolma of Choglamsar-Leh in India breaks down while showing the ruins of her home, wrecked by the August 2010 floods and landslides. Credit: Athar Parvaiz/IPS

WASHINGTON, Apr 12 2013 (IPS) - Is sustainability still possible? Yes. Is it still probable? No. With bold action today, tomorrow, and in years to come, we could succeed in creating a sustainable and prosperous society. But what does bold action actually mean?

First and foremost, we have to start living within Earth’s boundaries: stop changing the climate, wiping out biodiversity, disrupting the phosphorous and nitrogen cycles, and so on. And to do that we’ll need to live a one-planet lifestyle.

For some that’ll mean increases in consumption – as they step out of poverty – but for the two billion consumers on the planet, it will mean dramatic alterations in how they live. For example even if the average resident of Vancouver became a vegan, gave up flying and driving, lived in passive solar homes, and cut their purchases in half, they’d still be living 60 percent above a one-planet threshold, according to Ecological Footprint analysis.

To get to that scale of change (and keep in mind the goal of such radical changes is to prevent a dystopian future of runaway climate change) will require nothing short of a complete overhaul of human cultures, a topic explored in depth in Worldwatch’s latest report, “State of the World 2013”.

Gone are the days where profit, growth, and stuff come first. We’ll need to shift corporate structures, the rules of marketing, and once again ground our economies in ecological realities. We’ll need to relocalise, and cultivate community interdependence again. We’ll need to reserve fossil fuels for their essential uses only – unsubstitutable ones like making drug inputs or high grade plastics for surgical use – and quickly move toward a renewable-energy based civilisation even if that means significant cuts in energy in the short-term (as we build our renewable energy capacity).

And to get any of this done, we’ll need activists and entrepreneurs pushing us toward this new normal – using all sorts of strategies: social enterprises putting positive impact over profit, an upgrade of the environmental movement that builds long-term power and helps people adapt to life in a sustainable culture, a redesign of environmental education to prepare future leaders for the challenges to come, and political movements that aren’t afraid to use civil disobedience and make audacious demands.

But even then, with such bold action, success is far from guaranteed. Thus we need to also start preparing for “the long emergency” now – while we still have capital (of the natural, financial, social and human varieties) and a window of stability to draw upon.

And how should we prepare? Make our governance systems more robust and deepen their commitment to democracy; assess the risks and benefits of ‘magic bullets’ like geoengineering, before we make a rash decision in a moment of panic; prepare for the large flows of migrants that climate change – even at its current level – have locked into the system; and start applying the lessons from other forced contractions to today’s societies and figure out how to make these inevitable transitions as painless as possible.

For one way or another, our civilisation is going to contract, the only question is whether we take proactive control of this process, or we wait for nature to take its course. A course that very few will like.

*Erik Assadourian is Co-director of Worldwatch’s “State of the World 2013: Is Sustainability Still Possible?” which will release on Apr. 16, 2013.