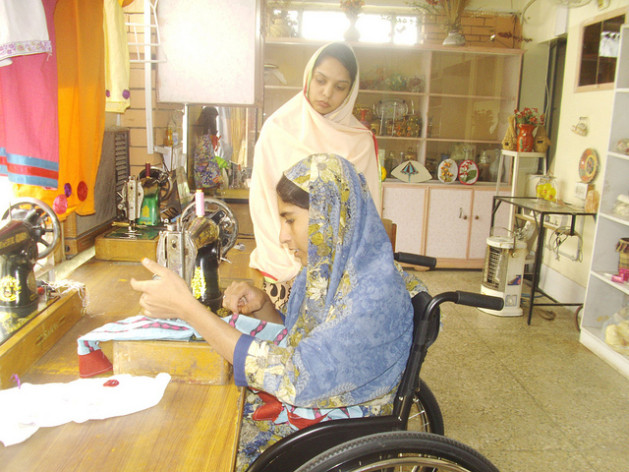 PESHAWAR, May 13 2013 (IPS) - Gul Shada thought it was the end of the road for her when she and her husband met with a road accident last year in the Nowshera district of Khyber Pakhtunkhwa, one of the four provinces of Pakistan. Not only did the mishap leave Shada widowed at the relatively young age of 37, she also sustained an injury to her back that immobilised her.

It was then that she came to the country’s sole paraplegic centre (PPC) at Hayatabad, to the southwest of Peshawar, the capital of Khyber Pakhtunkhwa. And it was here that she was taught that you don’t need to be on your feet to be able to stand on your own.

Along with helping her regain her physical strength, the centre also gave Shada training in sewing and embroidery. Today, she is able to earn a living of her own, enough to provide her three children with a decent education.

“I had thought I would be bedridden forever and my children would have to beg on the streets,” Shada told IPS. “But I am a shining example of how the PPC is helping its patients. I was referred for physiotherapy here after being operated on for spinal injury at the Hayatabad Medical Complex. My hopes were raised further when I was taught sewing and embroidery here and I became somewhat of an expert.”

Established by the International Committee of the Red Cross (ICRC) in 1983 for those wounded in the 1979-1989 Soviet war in Afghanistan, the centre was left in the hands of the Pakistan Red Crescent (PRC) after the ICRC withdrew in 1995.

The PRC managed the centre till the reins were handed over to the current management in 2005. The provincial government of Khyber Pakhtunkhwa – which borders Afghanistan to the northwest – then made it an autonomous body governed by a board, through a 2009 Act.

The PPC, which has a staff of 110, remains the only centre of its kind in Pakistan which provides free treatment and rehabilitation to patients who have received injuries to their spine. Some 1,200 women and 800 men have benefited since 2005 under its training centre, bringing hopes to lives that have foreseen only despair.

One among them is Shaheen Begum from Khyber Agency, one of the eight tribal areas that make up the Federally Administered Tribal Areas, to the west of Khyber Pakhtunkhwa. The 25-year-old fell from a wall in February last year, damaging her spine. After treatment at the local hospital, she was shifted to the PPC for physiotherapy.

“Not only did the physiotherapists give me tips on different exercises during my two-month stay here, they also helped me acquire computer skills. Now, I work as a composer from home,” Begum told IPS.

She may be confined to a wheelchair now, but that hasn’t dented Begum’s confidence.

On a follow-up visit to the PPC she told IPS that “I have only one son. I feel proud to be able to operate a computer and earn enough so that I can afford a proper education for him. Otherwise, I would have been roaming the streets of Peshawar with a begging bowl.”

She said she couldn’t thank god enough for giving her the opportunity to be able to work and earn her own living despite her misfortune.

The PPC’s chief executive officer, Syed Muhammad Ilyas, takes pride in the progress of his patients. He urges them to regain their physical strength and rather than be a burden on others, learn to help not just themselves but also their families.

“These are healthy young men and women who have become prisoners in their own bodies and have lost control over their bodily functions. One can well imagine the level of frustration and anxiety they go through,” he said.

The trap becomes worse if they are the sole breadwinners of the family, he added. This is, in fact, the case with 80 per cent of the patients who come to the PPC, while more than 90 per cent of them fall below the poverty line.

Many of the spinal cord injuries are sustained during road accidents, said Ilyas. But he added that falls from rooftops, trees or electricity poles, as well as firearm injuries, were also common. Patients at the centre are as young as 26 years old, he said, and they tend to arrive at the centre with little or no hope.

Few things are more expensive than treating and rehabilitating patients with spinal injuries. The cost of rehabilitating a patient in Europe or the United States can go up to millions of dollars. “We achieve the same with a fraction of that amount by getting patients to a stage where they can move about on a wheelchair and by imparting them different skills,” Ilyas said.

Sultana Gul, 51, says she came to the centre for physiotherapy 10 years ago, where she learned skills as a seamstress. Her house in Charsadda district now serves as a training centre for local women, helping many earn respectability and an income.

“In the past decade, I have taught these skills to at least 200 women in my neighbourhood,” Gul told IPS. “Around 10 women, who were earlier reduced to begging in the market square, are now earning their own living because we brought them here and taught them how to knit and sew. We train them for a month after which they teach the same skills to other women around them, everyone making a decent sum of money in the bargain.”

“It takes only a month to train a patient,” said Gul Pari, a trainer at Sultana Gul’s centre. They are initially hesitant to go through training, but agree once you convince them of how it can change their lives, she said. The centre trains about 80 women every year, she said, and there six trainers like her.

And that gives a whole new meaning to women’s empowerment.