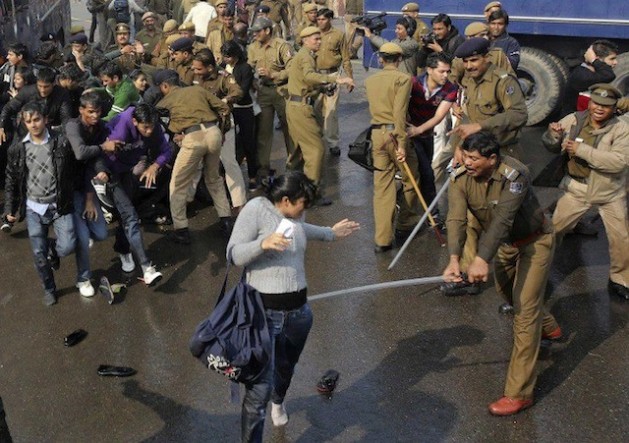 A woman is attacked by police at an anti-rape protest in New Delhi. Credit: Commonwealth Human Rights Initiative (CHRI)

NEW DELHI, May 8 2013 (IPS) - Harsh police handling of public protests erupting across India over a spate of sensational rapes since December has resulted in renewed demands to reform a force that retains the repressive features of its colonial origins.

Last month a bench of the Supreme Court, angered by police brutality on women protesting against rapes in the capital, New Delhi, and other north Indian states, demanded to know the status of compliance with rulings the apex court had made on police reforms six years ago.

“Even an animal won’t do what the police officers are doing everyday in different parts of the country,” the bench said, referring, among other things, to the beating up by police of a 65-year-old woman who had joined protests against rape in Aligarh, a city in the northern state of Uttar Pradesh. “How can police officers beat an unarmed lady?”

Justice G.S. Singhvi, leading the bench, singled out the case of a police officer slapping a young woman participating in protests on Apr. 19 outside a Delhi hospital where a five-year-old girl was being treated for serious injuries inflicted on her by her rapist in the Gandhi Nagar area of the capital.

“The police can do little to reduce crimes like rape, but they should be judged by how they react to such crimes,” said Jyotiswaroop Pandey, who retired last year as director-general of police in the northern Uttarakhand state and is currently a member of the police reforms commission.

Pandey told IPS that it was “unacceptable” that police failed to react to complaints of misbehaviour against a bus driver on Dec. 16, 2012.  Hours later, the driver and his crew were arrested for the gang rape and brutalisation of a 23-year-old woman passenger.

The victim and her male companion were flung off the bus and left lying in a busy Delhi street naked and bleeding for almost an hour with no passer-by daring to intervene for fear of getting embroiled in a lengthy police case.

As public protests grew, authorities moved the young woman to a Singapore hospital where she succumbed to her grievous injuries on Dec. 29. In Delhi, police resorted to water cannons, baton charges and mass arrests as protesters surged towards parliament.

Commenting on the rough treatment of protesters, Pandey said the police had “forgotten that their primary focus should have been on maintaining peace and order without resorting to force or behaviour likely to exacerbate tensions when an empathetic attitude could have quietened tempers.”

Even more than the brutal repression on the streets, rights activists are concerned with the way rape victims are treated at police stations, starting with refusals to record complaints.

In December, the victim of a gang rape in Patiala, Punjab state, committed suicide by consuming poison after leaving behind a note charging police with failing to act on her complaint and, instead, intimidating her.

Soon after she was raped by three men, the victim had appeared on television channels describing her ordeal, but that failed to rouse the police. Even after the suicide it took intervention by the Punjab high court before authorities moved to sack three policemen and initiate criminal proceedings against them.

In a press note released on Apr. 23, the Commonwealth Human Rights Initiative (CHRI), a major non-government organisation that is pushing for police reforms, expressed “serious concern at the continuing lack of response to victims of rape.”

CHRI said evidence of this failure could be seen in the way police handled the case of a five-year-old girl who was kidnapped and raped in Delhi last month.

Instead of registering the missing person complaint, police “simply drove the distraught parents away,” the CHRI press note said, adding that policemen even offered a bribe to prevent the family from taking their story to the media.

Even the new rape laws, which threaten police officers who refuse to record a complaint of rape with a two-year jail sentence, seem to have done nothing to change attitudes and behaviours, said CHRI Director Maja Daruwala.

The new law, drawn up after wide consultations with civil society, takes into consideration current thinking on gender issues and existing patriarchal attitudes in society to modify ideas ingrained in the Indian Penal Code that was introduced by the British colonial regime in 1860.

Recent events show that the law, passed by parliament on Mar. 20, is yet to kick in. “Changes in law brought about after the Dec.16 rape have little meaning if the police continue to defeat justice through their…subversive practices,” Daruwala said.

Also, while the changes provide for quicker trials and harsher punishments for rapists, they have been criticised for completely overlooking the burning need to modernise the police force to make it service-oriented rather than repressive, as desired by the Supreme Court.

“If the 2006 directives of the Supreme Court were adopted and implemented they could have transformed the police from a feared and distrusted force into an essential service upholding the law,” says Navaz Kotwal, coordinator of CHRI’s police reforms programme.

On Mar. 6, alerted by reports in the media of the police’s repeated high-handedness in dealing with anti-rape protests, the Supreme Court issued notices to the provinces to report on progress in implementing reforms.

But senior police officers are sceptical. “Even though the apex court has not given up its monitoring, the present bunch of police reforms is already a futile exercise,” says Vikash Narain Rai, former director-general of police in the northern Haryana state.

Rai told IPS that if police reforms are to be successful they need to be accompanied by “judicial reforms, an overhaul of correctional services and real empowerment of society.”

Rai regrets that the emphasis remains on “flexing state muscles through increased retribution and protectionism, essentially by-products of male chauvinism, rather than on sensitising criminal justice functionaries and empowering women.”