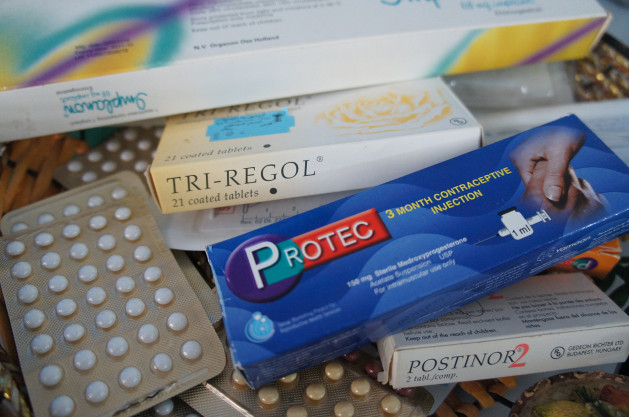 Contraceptives on sale at a store in Sanaa, but there are not enough buyers. Credit: Rebecca Murray/IPS.

SANAA, Jun 25 2013 (IPS) - Yemen’s population is increasing at a rapid rate, straining the country’s dwindling natural resources and setting up its youth for a grim future, with few jobs and scant means to get by.

Visiting a family planning clinic in downtown Sanaa, Layla waits for a routine birth control checkup. She believes she was 14 when she got married and pregnant, but is not sure.

From the rural town of Beni Matar, south of the capital, Layla, now 20, and her three children are like four-fifths of Yemen’s mostly rural population, lacking certificates to record their birth.

After her engagement Layla was forced to leave school.

She now farms the family land and raises their children, while her husband, a soldier, ekes out a salary of 150 dollars per month, and returns home on weekends.

Layla said she was exhausted when she had her last child. Although community elders condemn family planning methods as ‘forbidden’, with her husband’s consent she went to have an IUD inserted anyway. Although she sometimes feels pain in her abdomen when she does hard work, she maintains it is worth it.

With an average of 6.2 births per family, half the country’s population is under 15, and nearly 70 percent are under 25.

“I want my children to finish school, and then marry when they are around 20 years old,” she said. “I don’t want them to be like me.”

With an annual increase of 3.1 percent, Yemen’s population is estimated by the United Nations Population Fund (UNFPA) to be 26 million, with two-thirds living in rural areas.

With an average of 6.2 births per family, half the country’s population is under 15, and nearly 70 percent are under 25.

“Yemen has a big youth bulge, which has implications everywhere,” UNFPA representative Himyar Abdulmoghni said. “The revolution was an entry point.”

The population growth aggravates Yemen’s woes: water depletion, malnutrition, the lack of quality and capacity in education and health, scarcity of jobs and a dismal economy.

The World Bank conservatively estimates Yemen’s unemployment rate for young people at 60 percent, with more than half the population suffering from poverty during the 2011 revolution.

And the economic forecast looks gloomy. Yemen’s major export, petroleum, is running out, and hundreds of thousands of Yemeni day labourers in Saudi Arabia, relied on to send money home, are under threat of deportation because of their illegal working status.

There are strong incentives for having large families. Children can help out with work, mostly in agriculture, which cuts production costs. Large clans project power in local disputes. And husbands, sometimes widowed, who take additional wives to help take care of their house and children, often end up with more.

“Yemenis are proud of their family structure, and it’s a social norm that gives credit to big families,” Abdulmoghni explained. “If you have more children you will have more power.”

Conservative religious beliefs and a lack of awareness and access to family planning methods also contribute, which fuels superstitions around birth control. Rumours about cancer-inducing contraceptives are common.

Amal Maknon, a doctor at a family planning clinic in Sanaa, funded by the charity Marie Stopes, told how she traveled to rural villages to raise awareness and deliver treatment.

“People were often suspicious of what we were there for,” she said. “Some believed we were trying to stop them having children, and wipe out their future generations.”

Warda, 40, also from rural Beni Matar, is adamant that her eight children grow up to have manageable families. Her last child was born mentally impaired, and a doctor warned her that the next could be too.

Poor and exhausted from farming as well as taking care of her sick husband and kids, Warda ignored local rumours that contraception were cancerous, and got an IUD. “I was extremely happy,” she said.

Another patient at the clinic, Maryam, 60, said she never knew about family planning. From rural Beni Shamhan, she had 13 children, of which six are living. “It’s God’s will,” she said.

A widower, Maryam lives with the four children of her now-deceased husband’s second wife. Because there was no school nearby, her children were not educated. She said she hopes the kids she lives with get a better life.

Ebrahim Al-Harazi, a communication manager with local charity, Yamaan, travels around the country to combat misperceptions.

“Because men control the family, they prevent women from getting contraception. They think family planning is forbidden, because religious people say so,” said Al-Harazi.

“When we sat with religious people we discovered they think women would use family planning methods for immoral purposes.”

Al-Harazi said besides advising communities on economic issues and health statistics, including maternal mortality, a main goal is to engage with local imams.

“At the beginning, religious leaders said we have a hidden agenda, to influence them and attack their way of life,” he said. “So we showed them messages from the Quran that urged responsibility to wives.”

Aware they are facing challenges, with cash-strapped donors, lack of political will, insecure and often-inaccessible terrain, and increasing religious opposition, planning advocates hope for more women like Warda.

The mother now escorts her shy daughter-in-law, Aisha, 20, to a family planning clinic. When Aisha says she wants four children, Warda interjects and says, ‘Two is all right.”