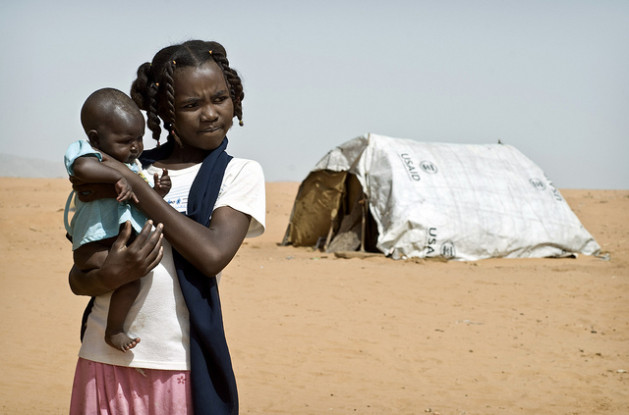 A young Sudanese girl holding a baby near a USAID tent in the Al Salam internally displaced persons camp. The United Nations Children’s Fund estimates that 33 percent of Sudanese women aged 20 to 24 were married before the age of 18. Credit: Sven Torfinn/CC By 2.0

KHARTOUM, Jul 10 2013 (IPS) - Lawyers and rights activists are calling for a change in Sudan’s laws which allow for the marriage of girls as young as 10.

It is time, they say, that Sudan’s laws recognise gender equality so that the country’s girls and young women can take control of their lives and leave behind the cycle of child marriage and abuse.

“(Activists) are advocating a change in the personal status laws as they discriminate against women and aim to keep them in the household,” said Khadija Al-Dowahi, from the Sudanese Organisation for Research and Development (SORD), which conducts research on child marriage.

Sudan’s 1991 Personal Status Law of Muslims does not grant women equal rights. It also promotes child marriage. Article 40 of the personal status law sets no age limit for marriage and in fact states that a 10-year-old girl can be married “with the permission of a judge”.

"Before we observed more marriages of girls in agricultural communities … now it is increasing in cities because of the economic situation and the attempt by families to preserve their girls from the corruption of the city." -- human rights lawyer Amel Al-Zein

“The personal status laws basically state that girls can get married when they are old enough to be able to comprehend matters … but you could easily say that girls understand matters at the age of 10,” Al-Dowahi told IPS.

In addition, Sudan has not ratified the United Nations Convention on the Elimination of All Forms of Discrimination against Women.

The U.N. Children’s Fund estimates that a third of Sudanese women now aged 20 to 24 were married before the age of 18. In rural areas, where the problem is more persistent, child marriage is as high as 39 percent as opposed to 22 percent in urban areas.

A visit to Khartoum Hospital shows clearly just how widespread the phenomenon of child marriage is in Sudan. Inside, there is an entire Obsetric Fistula ward – the patients there are mostly young mothers whose bodies are too underdeveloped to allow them to give birth, making them prone to developing fistula.

Amel Al-Zein, a lawyer who has researched the issue of child marriage, is very critical of the country’s personal status laws.

“Unlike other countries in the region or Islamic countries per se, it does not specify a certain age for marriage, which is the only guarantee to controlling child marriage,” Al-Zein told IPS.

Al-Zein stated that women could not go to court to get a divorce or undertake any legal procedures before the age of 18, which contradicts the fact that girls as young as 10 are married.

“When we began researching issues of gender justice, we started seeing how child marriage is interlinked to many issues facing women, the women go to courts to fight over custody and get a divorce only to discover how terrible and discriminatory the laws are,” said Al-Dowahi, whose organisation has proposed reforms to the laws.

SORD has recently established a legal aid centre for women being discriminated against by the personal status laws. So far 46 cases have arrived at the centre since its inception three months ago.

Salah told the press in October 2012: “Islam encourages youth to marry to save them from perversion or any dangers of being single and to make them happy and to preserve reproduction.”

Not all religious scholars share Salah’s opinion. This is mainly because child marriage in Sudan is a consequence of social and cultural traditions, not only religious values.

Sarah Mohamed*, for example, was married off at 13 years old because the nearest high school for girls was too far from her village – lack of access to education makes parents less likely to keep daughters at home.

This is not an unusual age for getting married in her small village of Karko, which lies in Southern Kordofan.

“I remember how confused I felt, I had no idea what marriage is, I was a child,” Mohamed, who turned 30 a few weeks ago and now has five children, told IPS.

She had her firstborn at 16 and today very few people can believe that she has a son in high school.

Rana Ahmed* had a different experience. She was 15 when her mother discovered that she was dating a boy in her neighbourhood, after she caught her speaking to him on the phone.

“She became too upset and told me that she would find me a husband before I did something really bad. She said this would make me stop playing around,” Ahmed, now 24, told IPS.

Her husband, who was in his late 30s at the time, took Rana abroad, where he worked as a doctor, for five years. When they returned to Sudan, with her two young children, she felt that she wanted to live again.

“I was bored and unfulfilled in my life, I wanted to experience what girls my age experience. I wanted to have the freedom to date and go out,” said Ahmed who is now divorced.

Al-Dowahi said that Ahmed’s story is not unique – young girls are not ready for family responsibilities or for sexual experience. Some end up succeeding and going back to school, but others cannot cope and end up having affairs and living a quite different life.

As Sudan’s economic situation continues to deteriorate, activists have said that  cities are themselves becoming similar to rural areas, with child marriage becoming a pressing problem even among the educated urban communities.

“Before we observed more marriages of girls in agricultural communities … now it is increasing in cities because of the economic situation and the attempt by families to preserve their girls from the corruption of the city,” said Al-Zein.

SORD’s research showed that women in camps for internally displaced persons and in east Sudan usually face early marriage more than others.

In fact, east Sudan is home to the youngest divorcee – a young girl who was granted a divorce when she was nine. In the traditions of her community, girls are married at the age of two months, and taken to their husbands after they reach 10 years of age.

Lakshmi Sundaram, global coordinator of Girls not Brides, a global partnership to end child marriage, thinks it is a question of the value placed on the girl-child.

“We have to challenge converting a girl, even with her consent, into an economic commodity. We have to address the fundamental aspect that a girl has intrinsic value as a human being, not just a value cost,” Sundaram told IPS.