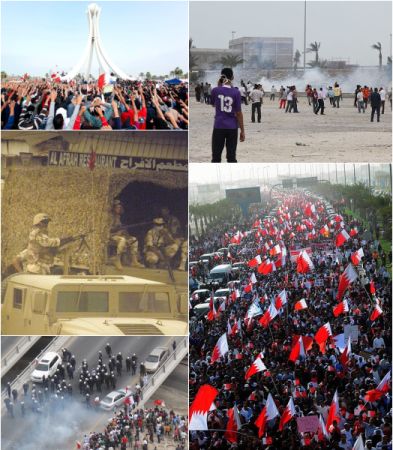 A montage of the Bahraini Uprising created from images available on the Wikimedia Commons.

Tamarod’s name and inspiration came from the Egyptian movement that led to the ouster of former president Mohamed Morsi, the leader of the Muslim Brotherhood.

In its first statement, issued on Jul. 4, Tamarod said it wants “a homeland that embraces all its citizens, an Arab and independent Bahrain where the people can have greater decision-making power within their country.

“This movement is a ‘rebellion’ against the injustice and illegitimacy of a regime that has exerted its power through the exploitation of the country’s natural resources and draconian legislation that limits human rights and judges its citizens based on their ethnicities,” the statement said.

Ahead of Aug. 14, which Bahrain’s government anticipated as a day of protest, high-level official statements describing Tamarod as a sham version of the Egyptian movement were released.

The Ministry of Interior warned against responding to Tamarod’s calls of protest and civil disobedience, and King Hamad bin Isa al-Khalifah issued a decree ordering the National Assembly to convene and, for the first time in Bahrain’s history, toughen anti-terrorism laws.

Bahrain’s broad definition of terrorism can be applied to the act of burning tires, blocking streets, the use of Molotov cocktails and protesting in the capital, Manama, which the government argues can damage the country’s economy.

Bahrain’s National Assembly came up with 22 recommendations on Jul. 28, including the banning of all demonstrations and gatherings in Manama and the withdrawal of citizenship from “perpetrators of terrorist acts” and “instigators”, all of which were issued as law by the king on Aug. 1.

In the run-up to Aug. 14, at least five online activists, bloggers, photographers and other members of citizen media were arrested, according to the Bahrain Centre for Human Rights (BCHR).

More than 70 websites and online forums that the government alleges promote terrorism were also blocked.

Tamarod called for peaceful but escalating civil disobedience by closing stores and refraining from shopping or fueling vehicles. The movement also called on people to temporarily halt financial transactions, including the paying of bills, and to switch off all lights at sunset.

Protest spots were also declared in nine different locations, for people to march to on foot – not as groups but individually – without any slogans, banners, flags or other such manifestations, and by avoiding all confrontation with security forces.

Since Aug. 12, an intensive security presence was felt throughout the capital, villages and other areas. This included checkpoints and the arresting of activists.

Bahrain’s pro-government media also campaigned against Tamarod by calling for the withdrawal of citizenship of oppositional political and religious leaders.

In comparison to the uprisings that began in other Arab or African countries in 2011, Bahrain’s protest movement was not a direct response to economic disadvantages faced by its people. The protests have been aimed at achieving freedom and self-determination.

Bahrain’s Shiite majority has long said that it is not given the same chances as the Sunni minority, such as jobs assigned by the Sunni royal family to top tier positions in commerce and governance. Shiite Muslims are also not allowed to join the island-nation’s security forces or army.

Bahrain’s authorities claim the opposition movement is aided by Iran and aims to remove the monarchy through terrorism.

The monarchy has responded by cracking down on demonstrators through hundreds of arrests recorded by international rights-monitoring organisations, including Human Rights Watch and Amnesty International, as well as systematic torture, the killing of demonstrators and the removal of alleged protestors from their jobs.

Bahrain’s government has gone to lengths to prevent foreign media from visiting the country since April 2011. International media were also largely barred from entering the country close to Aug. 14, all of which has resulted in citizens working to disseminate information.

Bahrainis were mostly impeded from protesting on Aug. 14 or on the days after because of the heavy police presence on the streets. Local and international media were meanwhile focused on the bloody events in Egypt following the killing of hundreds of pro-Muslim Brotherhood protestors that also took place on that day.

Two-and-a-half years after Bahrain’s uprising began, international media attention also remains scarce and the support provided to the monarchy by neighbouring countries such as Saudi Arabia has not contributed to positive change for either side.

Not even the results of a Bahraini independent inquiry, which expose substantial human rights violations, have spurred meaningful reform.

But Bahrainis are still showing their resolve to achieve their rights and live in a country where the rule of law is implemented through democracy and not by a tribe.

This is one reason why the Tamarod movement has established itself in Manama – despite the authorities’ attempts to quell protests there – and promised to continue its peaceful “rebellion”.

Nazeeha Saeed is the Bahrain correspondent for Radio Monte Carlo and France 24. Her coverage of Bahrain’s 2011 uprising led to her detention by Bahraini police. She now works closely with international organisations to defend freedom of the media in Bahrain and for the rights of both Bahraini and non-Bahraini journalists.