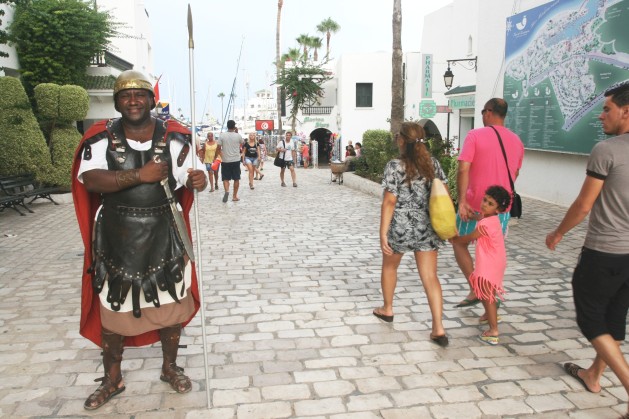 Egypt’s loss could be Tunisia’s gain as tourists begin to flock back. Credit: Louise Sherwood/IPS.

TUNIS, Sep 11 2013 (IPS) - The Tunisian revolution, which ousted the dictator Ben Ali in early 2011, gave greater liberty to Tunisians but it also scared off many tourists. However, despite the current political crisis visitors have steadily returned, and the Tunisian authorities and tourism industry are determined to protect a sector which plays a vital role in the Tunisian economy.

Tunisian minister of tourism Jamel Gamra is positive about the industry’s outlook. “Tourism is very important for the Tunisian economy,” he told IPS. “About 400,000 people are directly employed in the industry and up to 20 percent of the population [almost two million people] are living, either directly or indirectly, from tourism.

“The sector has big potential and we aim to reach 10 million tourists by 2016, a growth of one million tourists per year. Tunisia also has more freedom and democracy now, which is very important for economic growth and prosperity and has a positive effect on the tourism industry.”

"We haven't seen any change. We would be put off going to Egypt though." -- Clare and Andy Kellaway

Thomson, one of the leading United Kingdom tour operators which also runs First Choice, are similarly optimistic. “We increased capacity within the resort for summer 2013,” a spokesperson told IPS. “We added the exclusive, new Thomson Couples Sousse hotel, as well as adding the El Ksar Resort and Thalasso Sousse hotel to our programme.”

Hichem Borgi, commercial manager at the El Ksar resort and Thalasso Sousse, a four star hotel, is also confident about the return of the tourists but has concerns about political stability.

“This year our visitor numbers will probably reach pre-revolution levels again. However the situation is fragile and when incidents happen, like the attack on the U.S. embassy last year and the political assassinations this year, it interrupts the rhythm of the reservations and bookings.”

Atef Bouhlel used to operate spa treatment centres in two hotels in Sousse but left the tourism sector in 2012 and is now an associate in a commercial plastering business. “When the revolution happened hotel occupancy dropped dramatically, from 900 to 300 or 400 guests in one hotel, the number of clients went down and I could no longer afford the rent,” he said.

He still sees tourism as vital to the Tunisian economy. “Libya earns a lot of money from oil but we don’t have that. Our economy is dependent on tourism. Even those working in agriculture are supplying fruit and vegetables to the hotels. Buses and taxis drive the tourists around and transport them to and from the airport. Students spend their summers working as waiters. Tourism helps in many sectors.”

Recent figures released by the Tunisian National Tourism Office confirm that tourism is showing steady signs of recovery. In 2010 the industry was bringing in 3.5 billion dinars (2.1 billion dollars) but in 2011, the year of the revolution, visitor numbers dropped by 30 percent on the previous year, from nearly seven million tourists to less than five million.

An increased police presence is being maintained in resorts this season. Tunisia has only to look to Egypt to see what could happen to tourism revenue if the political situation turns violent.

“Tour operators have cancelled flights to Egypt until October. Tourists who booked to go there are being offered a refund or an alternative holiday in another destination such as Tunisia,” said Snene Mohamed Anas with Tunisie Voyages, a travel agency which provides excursions for the international tour operator Tui.

Keeping tourists safe is priority for his company. “We are in touch with the authorities and if there are protests we warn people immediately,” he told IPS. “Also on our Sahara excursions we send a car ahead of the bus to make sure there are no problems on the road.”

These strategies do seem to be working to allay the fears of tourists. Clare and Andy Kellaway, from England, were visiting Sousse with their son, Cameron. “We haven’t heard about any political problems. We came here in 2005, 2008 and now. We haven’t seen any change. We would be put off going to Egypt though.”

Moves are being made to encourage tourists to step outside hotels. “The authorities in charge of the tourist sector are not doing enough,” said Ghazi Ben Rejeb, a waiter in one of the cafes in the popular resort Port Al Khantaoui. “We need to improve the excursions and activities available.”

Such demands have not gone unheard. “First we must restructure the sector in terms of developing not only hotels but culture, handicrafts, and jobs,” said Gamra. “Secondly we are currently seen mainly as a beach destination but we want to diversify developing culture, archaeological sites, and sport.

“Thirdly we want to become more web-oriented and make better use of new technology. Currently we are heavily dependent on tour operators but we want to start selling our product directly to customers online. We also want to attract more tourists from the Asian, African and Gulf markets.”

Tunisia may still be trying to overcome the hurdles of its political transition but the tourism industry, one of its economic mainstays, looks set for a sunny future.