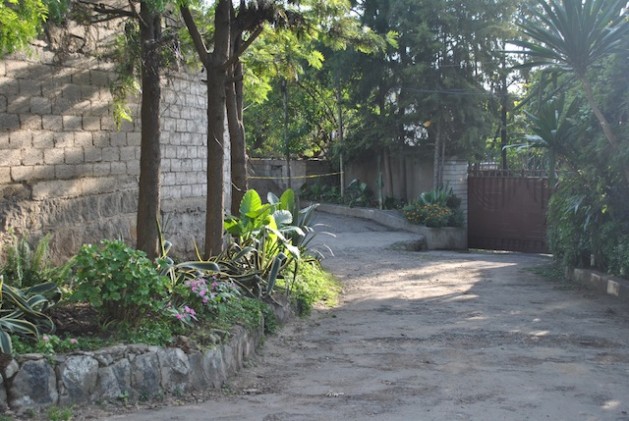 ADDIS ABABA, Oct 21 2013 (IPS) - The explosion went off at 2:40 on a Sunday afternoon, on a tree-lined side street in Ethiopia’s capital city of Addis Ababa. The area was a quiet one – home to foreign diplomats, domestic civil servants and several embassies – and the blast was strong enough to kill two men, startle the neighbours, and demolish a small home.

But if the government’s current theory is correct, the carnage could have been much worse.

Sunday, Oct. 13, was the day of a big football match – a rare shot at the World Cup playoffs for Ethiopia, which ultimately lost against Nigeria in Addis Ababa. Given the debris found at the site of the explosion, including suicide belts and an Ethiopian team jersey, investigators think the men may have been planning to detonate near the football stadium in central Addis, where thousands of fans and security workers had gathered.

But something went wrong, and the two suspects – Somali nationals, according to the government – never made it out of the house before their explosives went off.

Al-Shabaab, a militant group based in Somalia, claimed responsibility for the attack on its Twitter account, but its details were off. “We Claim Responsibility for Today’s Bomb Blast in #AddisAbaba, #Ethiopia, that Left Nearly 10 Kuffar [disbelievers] Dead,” said the Monday tweet, which greatly exaggerated the number of casualties and was not posted until the day after the actual explosion.

“It is a plausible assumption that Al-Shabaab may be connected to the crime,” Kjetil Tronvoll, an Ethiopia expert and senior partner at the International Law and Policy Institute, told IPS, noting that Al-Shabaab has repeatedly denounced Ethiopia and threatened to carry out attacks.

“Ethiopia has a standing high-alert security vis-a-vis Somalia,” he added. “[The recent explosion] gives justification to such alertness.”

The Ethiopian government is adamant about clamping down on extremism in all its forms, said Prime Minister Hailemariam Desalegn at a press conference this month. “Extremism often degenerates into terrorism, so we have to fight extremism as much as we can, and that has no compromise at all.” This approach has garnered criticism from some Ethiopian Muslims – including ethnic Somalis – who claim their communities are unfairly targeted.

“The terrorist incident, if connected to Al-Shabaab, may sadly contribute to a possible stigmatisation of the Somali population at large in Ethiopia,” said Tronvoll.

The Ethiopian government said it would not change its approach to national security on its own soil, and would focus instead on its borders, since the two suspects in the Sunday explosion arrived illegally.

“We will not make any changes to domestic security – that situation is already intact,” government spokesman Redwan Hussein told IPS. “We will only make sure we are more secure when it comes to people getting into the country in the first place.”

In Somalia, Al-Shabaab has positioned itself as a bulwark against Ethiopian and Western influence ever since its inception as the military wing of the Islamic Courts Union (ICU), an Islamist governing body that rose to power in Somalia in early 2006. In its early days, it garnered some public support as a counterweight to the Ethiopian troops that effectively ousted the ICU from Mogadishu in late 2006 with backing from the United States.

Over the next few years, Al-Shabaab set up a governing system based on Shariah, or Islamic law. Its territory expanded across most of southern Somalia and the group forged closer bonds with Al-Qaeda, formally linking with it in 2012. But that process wrought some discord between those Al-Shabaab leaders who envisioned a global Islamist movement and those who sought to focus on domestic issues first and foremost.

The cracks began to show after 2011, when Ethiopian and Kenyan troops moved in to bolster troops from the African Union Mission in Somalia (AMISOM). At the same time, Al-Shabaab’s refusal of humanitarian aid during a devastating famine was already eroding its public support. In the two years since, Al-Shabaab has been pushed out of its former strongholds in the capital city of Mogadishu and the port city of Kismayo, and vicious leadership scuffles have become a threat to cohesion. More and more, the organisation has struggled to conscript voluntary fighters, relying instead on forced recruitment.

Some analysts see the attacks Al-Shabaab has taken credit for – including the Addis Ababa bomb this week and the massacre that killed 67 at a Nairobi mall last month – as last gasps rather than shows of power. The organisation remains a very real threat, but it no longer enjoys the level of support it once did.

“There might be some fringe elements here and there on both sides, who could use [the Addis Ababa attack] to air some grievances,” Alula Alex Iyasu, an Ethiopia-based analyst at the Institute for Peace and Security Studies, told IPS.

“But Muslims and Christians have been living side-by-side in Ethiopia, and in Somalia the vast majority despise Al-Shabaab and affiliated groups. So I’d imagine they’d condemn the Addis bomb wholeheartedly just as if it had happened on their own soil.”

Somalia has lately been making strides in its effort to end two decades of failed statehood. A new constitution and federal government were established last year, with President Hassan Sheikh Mohamud at the helm.

The international community has pledged billions of dollars to rebuild the war-torn country, and the United Nations Secretary-General Ban Ki-moon called this week for AMISOM to bolster its troops in Somalia, already numbering about 18,000, with another 4,400.

As Somalia struggles toward order, peace reigns around the explosion site on Rwanda Street in Addis Ababa’s Bole neighbourhood, where a high concentration of ethnic Somalis live side-by-side with Ethiopians, and where children of both ethnicities used to play together in the very compound where the perpetrators of Sunday’s bomb lived and died.

In the days following the blast, police tape was stretched across the gate and a few federal policemen guarded the site. But other than that, life along the leafy street was progressing largely as normal, with ethnic Somali and Ethiopian residents mingling at small shops and stopping to chat on street corners.

If the perpetrators hoped to stir up divisions between Somalis and Ethiopians, as Al-Shabaab once did to rally support for its cause, it would appear they missed the mark — and lost their lives into the process. The Ethiopian national security apparatus, meanwhile, has gained one more reason to keep up its controversial tactics.

“Ethiopia takes these kinds of threats seriously,” said Iyasu. “Somalia has been in this precarious situation for the past 20 years, so in a way this is nothing new for the Ethiopian government.”