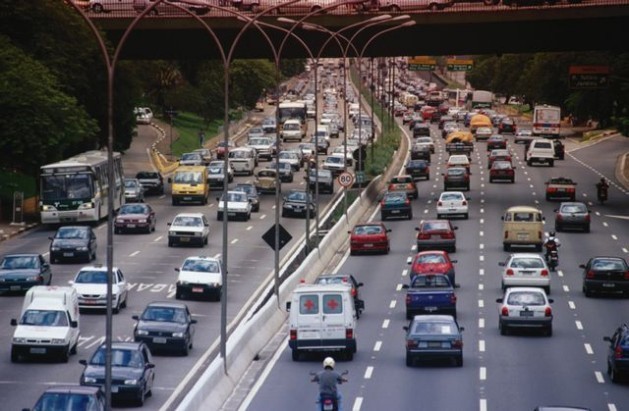 RIO DE JANEIRO, Oct 11 2013 (IPS) - In the last five years, Brazil has joined the ranks of the world’s big polluters, whose main source of greenhouse gases is the burning of fossil fuels.

Climate pollution in South America’s giant is taking on a First World pattern, according to José Marengo, one of the authors of the Fifth Assessment Report of the Intergovernmental Panel on Climate Change (IPCC), whose first volume was released Sept. 30.

And this is due, in part, to the country’s policies to foment industry and consumption. Tax exemptions to stimulate car and motorcycle sales had a positive effect on economic growth. But they also fuelled a surge in the number of cars in circulation.

The number of cars in this country of 200 million people doubled in just over a decade, from 24.5 million in 2001 to 50.2 million in 2012, according to the report “Evolution of the fleet of cars and motorcycles in Brazil – 2013” published Oct. 10 by the Observatorio das Metropoles, an academic research group.

Motorcycles experienced even more dizzying growth in the same period, with the number soaring from 4.5 million to 19.9 million.

“It’s worrisome, because we always criticised developed countries for this,” Marengo, who heads the Centre for Earth System Science of Brazil’s National Institute for Space Research (INPE), told IPS.

This aspect contrasts sharply with the reduction of deforestation in Brazil’s Amazon rainforest, which has been widely touted by the authorities.

The country managed to reduce its greenhouse gas emissions by 38.4 percent between 2005 and 2010, due to the decline in deforestation in the Amazon jungle, Carlos Nobre, the secretary for R&D policy in Brazil’s Ministry of Science and Technology, told IPS on Sept. 27, when the IPCC published the Fifth Assessment Report Summary for Policy Makers.

In 2009, Brazil pledged to cut greenhouse gas emissions by between 36.1 and 38.9 percent, based on two different GDP growth scenarios.

The government claims to be 62 percent of the way to that target, thanks to the slowdown in deforestation.

Up to 2009, tree felling was the cause of 60 percent of climate pollution in Brazil, while fossil fuel use came in second place.

But today, new problems are emerging.

“If we had a reliable, comfortable mass transit system, people would leave their cars at home,” said Marengo. “But travelling on the subway at certain times of day in São Paulo or Rio de Janeiro [the two largest cities] is degrading. This has to change, and the only way it can is to foment decent public transport.”

For the director of public policy at Greenpeace Brazil, Sergio Leitão, this change in climate pollution patterns also coincides with the priority put on new initiatives, like exploration and drilling for the so-called subsalt oil reserves, which lie about seven km below the surface of the ocean, beneath a layer of salt up to two km thick.

“We are starting to exploit the subsalt reserves, and our big cities are packed with cars,” Leitão told IPS.

While the world is moving towards new energy strategies and mixes, Brazil is heading in the other direction, according to the activist, which will make it impossible for the country to continue to be “a friend of the planet.”

The IPCC report says the climate change observed since 1950 is unprecedented, and it is “extremely likely” that human influence has been the dominant cause of the “unequivocal” warming observed since the mid-20th century

The report says humanity must plan for climate change in every way possible, to try to keep global temperatures from rising by more than two degrees this century – the most optimistic scenario.

To achieve that, Leitão said, “fundamental, urgent and inevitable measures” must be taken: changing the production model and drastically curbing consumption of oil, coal and gas.

“It worries us that in Brazil, the subsalt reserves are seen as the great economic opportunity of the future,” he said.

In the field of energy, the big investments have gone into making it possible to exploit the technically challenging subsalt reserves – 340 million dollars in investment is in the pipeline for up to 2020, he pointed out.

“But we should take a different tack, with a focus on research on renewable, clean energy,” he said. “This country stands out for its abundant sunlight and wind. Development of these areas should become more dynamic, and technological substitutes for fossil fuels should be found.”

Marengo stressed that, even if the whole world stopped emitting greenhouse gases today, the earth would continue to warm for at least 20 years.

“The IPCC talks about approximately two decades, because carbon dioxide (CO2) has been accumulating for hundreds of years,” he said.

“The process of photosynthesis in the jungles and forests can help absorb CO2, but it’s not immediate and it takes decades,” he added.

Mitigation measures to reduce greenhouse gas emissions are costly and their effect is long-term in nature, but they are the only thing that can keep future impacts to a minimum, he said.

In his view, the most severe impacts will begin to be felt after 2040.

Adapting to these changes is possible, but the message that the IPCC wants to send to the next climate summit, in Warsaw in November, is that measures must be taken to avoid the more pessimistic scenarios, which foresee temperature rises of over two degrees.

Marengo laments that environmental issues have been pushed to the backburner since the global economic crisis broke out in 2008. “It’s impossible for a country with a more difficult economic situation to join an environmental treaty, because it would have a high social cost,” he argued.