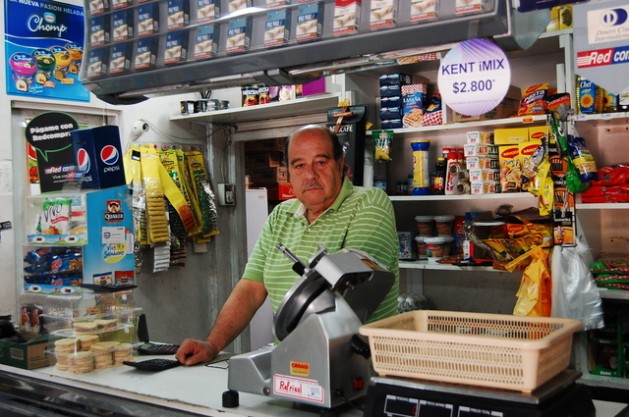 Like many Chileans, Alejandro, who owns a small supermarket, hopes the next government will curb social inequality. Credit: Marianela Jarroud/IPS

SANTIAGO, Nov 15 2013 (IPS) - Voters fed up with the extremely unequal distribution of wealth and power in Chile are expected once again to elect a centre-left government Sunday.
According to the latest poll by the Centro de Estudios Públicos (CEP), a local think tank, former socialist president Michelle Bachelet (2006-2010) is set to win outright in the first round of voting, with an at-least 30 percent lead over Evelyn Matthei, the candidate for the governing right-wing alliance.

Bachelet needs 50 percent plus one vote to avoid a run-off – which only occurred once, in 1993, since democracy was restored after the 1973-1990 dictatorship of General Augusto Pinochet.

But CEP also projected a low turnout, as did the Latinobarómetro Report 2013, which found that Chileans were highly critical of the system because the economic prosperity of the last 20 years has only been enjoyed by a minority of the population.

According to the World Bank, per capita income in Chile is 21,500 dollars a year.

But in this South American country of 17 million, two out of three households have incomes of less than 1,200 dollars a month and are heavily in debt, according to the Fundación Sol, a non-profit organisation that focuses on labour and social issues.

And over half of all workers earn less than 500 dollars a month.

By contrast, the wealthiest 4,500 families have an average monthly income of over 40,000 dollars.

Poverty is measured by the “national socioeconomic survey”, which estimated the poverty rate at 14.5 percent of the population in its latest edition, in 2011.

This cut-off line is based on the cost of the basic basket of foods – which was constructed in 1987 with products that Chileans no longer even consume, such as cooking oil sold in bulk.

Experts agree that if the methodology for estimating poverty were updated, the rate could climb as high as 28 percent.

That explains the roots of the discontent that has fuelled a wave of protests and demonstrations since 2011 and threatens to pose a major challenge to the government that takes office in March 2014, if the profound changes demanded by Chileans are not forthcoming.

Economist Gonzalo Durán at Fundación Sol told IPS that “many indicators depict the country in a very positive light,” but that access to the trappings of development was limited.

And he said that gap doubled between 1990 and 2011, which meant that “according to this indicator, inequality in Chile has increased 100 percent in the last 20 years.”

Durán cited a University of Chile study which shows that the wealthiest one percent accounts for 30 percent of all income – compared to just under 22 percent in the United States, for example.

Sociologist Alberto Mayol told IPS that “poverty is definitely a very urgent issue. But inequality is not the same thing as poverty, and in Chile it has never been addressed by public policies.”

In societies in general, he said, a not insignificant portion of the population tends to be left out of benefits and bears the brunt of the policies dictated by the country’s social model.

“That proportion is generally around 30 percent. But in Chile, for example, 60 percent of workers suffer from precarious employment.”

Chileans, who are generally not familiar with these hard-hitting statistics, live with them nonetheless day to day. Many people in this country cannot afford a decent diet, and millions rack up credit card debt just to buy their groceries.

Alejandro, 62, and Juanita, 56, a couple who worked hard to have their own small supermarket on the south side of Santiago, hope the next government will finally address the needs of people like them.

At great sacrifice, they managed to send their two children to university. Their daughter still lives at home, and they give their son help when he needs it. “Both of them went to the university, thanks to our blood, sweat and tears,” Alejandro says with emotion.

“I don’t care who governs; work is my government,” he adds, before stating that “people have to take to the streets to protest because being able to do that is one of the important things about democracy, and because there are many reasons to do so.”

His wife, however, says it is very important that the right does not govern, because when it does, “the rich continue to call the shots, and the middle and lower classes continue to sink further and further.”

Mayol said Chile is reaching Sunday’s elections “at a time of acute protests challenging the fundamental values and cultural conditions of this model of society.”

The election of multimillionaire business tycoon Sebastián Piñera as president in 2010 “was the cultural triumph of profit as a form of social relations, as a political mechanism.” But as the right-wing president’s four-year term is coming to an end, “profit is akin to Satan in Chile,” he said.

The analyst said “the economic, political and institutional model is suffering a crisis of legitimacy, and in politics, legitimacy is like motor oil – it prevents friction.”

Once Bachelet wins the elections, he said, she will have to defend her new coalition, Nueva Mayoría (New Majority), which represents “a confluence with the social movements of the old Concertación,” the centre-left coalition that governed the country from 1990 to 2010.

To do that, he said, she will have to govern together with representatives of social movements, like two former student leaders – Camila Vallejo of the Communist Party, and Giorgio Jackson, an independent – both of whom have a strong chance of being elected to Congress.

On Sunday, voters will also elect the 120 members of the lower house, and 20 of the 38 members of the Senate. In addition, regional advisers, who will act as liaisons between the citizens and the government, will also be elected for the first time.

Bachelet will have to live up to her main campaign pledges: tuition-free higher education for all within the next six years; a tax reform making it possible to finance this; and the most strongly-voiced demand – a reform of the constitution left in place by former dictator Pinochet, which is still in force.