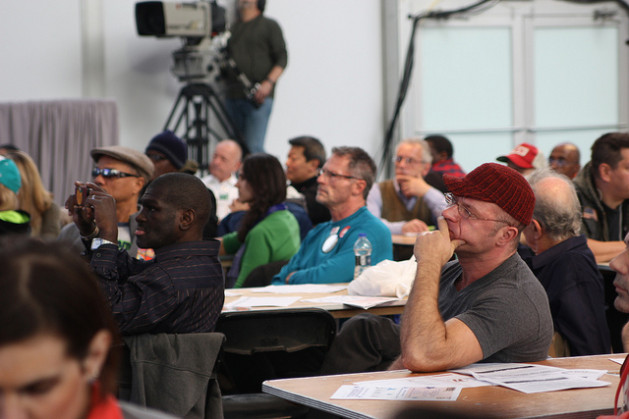 NEW YORK, Dec 1 2013 (IPS) - Four hundred Eighth Avenue, home to the largest welfare centre for people with AIDS in New York, is the kind of grey, drab city building that seems like it was dragged, scowling, into the 21st  Century.

Sandwiched between the banal hustle of Penn Station and the outer reaches of Manhattan’s once gritty waterfront, the corner of 30th street buttresses the north end of Chelsea, New York’s historically gay neighbourhood, where AIDS activism began over 30 years ago but today new glass condos price out long-time residents.

"If states like New York can take it that last lap, it can really provide this bellwether to say that it can be done.” -- Simon Bland

On a rainy afternoon in November, several HIV and AIDS Service Administration (HASA) clients stood out front, waiting for a drizzle to let up and chatting with workers, occasionally bumming cigarettes from them.

Inside, next to an older black gentleman blowing his nose and chatting on a cellphone about his boyfriend, a slight Latino man sat quietly watching a scratched-up television box and the neon ticker next to it that would show his number. The man was immediately recognisable to straphangers who ride the A, C, E and 2, 3 subway lines, where he has panhandled for years.

For more than a decade, activists have fought to include HIV-positive New Yorkers in protected groups that by law cannot be made to pay more than 30 percent of their assistance for housing. Currently, many are forced to choose between food and rent or have to enter the shelter system, which has swollen in recent years.

But with new progressive mayor Bill de Blasio taking office in the New Year and a more attuned state government, activists are pushing to introduce a plan of action bolder than any before: to end AIDS in New York by 2020.

In 1983, only two years into the pandemic in New York, playwright and AIDS activist Larry Kramer wrote “it is the sad and sorry fact that most gay men in our city now have close friends and lovers who have either been stricken with or died from this disease. Doctors are saying out loud and up front, ‘I don’t know.’”

A Year to Live Becomes a Lifetime

Wayne Starks, a Vocal-NYC board member, knows how difficult it can be to handle the initial diagnosis. When a doctor told him in 1986 he had one year to live, he fell into despair.

“I was scared. I started using drugs and lost touch with my family,” Starks told IPS.

But when two, then three years went by and he hadn't died, Starks realised he had to turn his life around.

He started sculpting and today he takes Complera – a three-pill cocktail – once a day. His viral load is undetectable.

Much has changed since then and the height of the epidemic a decade later, when nearly 10,000 New Yorkers were dying from AIDS every year.

Today, if the disease is caught early, HIV-positive young people following a strict anti-retroviral regimen can expect to have “near-normal” live expectancies. Needle exchange programmes have reduced infections among intravenous drug users in New York from over 13,000 a year to only 150.

Yet today the state is also home to more HIV-positive people than ever, an estimated 160,000 New Yorkers. Of those, 30,000 likely don’t know their status.

Gay men still make up the overwhelming majority of new cases, and among young gay men, infection rates are rising at an alarming 22 percent nationally.

Nationwide, African Americans silently make up 44 percent of new infections. In New York, people of colour make up 79 percent of the HIV-positive population.

Although a 2010 New York AIDS Institute study found that deaths among persons with AIDS had declined 82 percent since 1992, 2,000 New Yorkers still died of AIDS that year.

The same data showed that 46 percent of HIV-positive New Yorkers were not receiving regular care and 63 percent didn’t have their viral loads under control.

Disturbingly, a quarter of new HIV diagnoses are made when patients already have full blown AIDS.

So last year, frustrated by what they saw as a failed national AIDS strategy, Harrington and Charles King, CEO of Housing Works, sat down to come up with a plan for New York.

The national plan “was not a strategy to end the epidemic, it was a strategy to maintain an epidemic,” said King, who interrupted President Barack Obama at the White House unveiling to say as much.

“The technology is there, the tools are there,” King told IPS. “Do we have the political will to make it happen?”

Of course, without a cure, ending HIV is not on the horizon, but ending AIDS, the dangerous late stage of the virus, is something UNAIDS has already proposed globally with its “zero new infections, zero people dying of AIDS and zero stigma” campaign.

“Surveillance is the big picture,” Harrington told IPS. “On the community level we need to greatly increase testing among populations at risk, like young gay men and transsexuals.”

New York can learn from other cities, added Harrington. In San Francisco, the number of people who know their status increased “from about 80 percent to about 93 percent in the last six years – one of the ways they’ve done it is to increase testing among at risk communities from once a year to three or four times a year.”

If more people know their status, more are going to get proper treatment and get their viral loads under control.

Studies have shown that HIV-positive people on proper anti-retroviral treatment and with low viral loads can lower the chances of transmitting HIV to their partner by 96 percent.

“The first level of the end is control and very minimal transmission… reducing viral load as much as you can,” King told IPS. “If you got 80 percent of infected population virally suppressed, it would have a huge effect on transmission rates.”

“We should be encouraging everyone who is HIV-positive to start treatment,” he added.

The New York plan would institutionalise testing that can distinguish between chronic HIV patients those that have early, acute infections, when it is most contagious.

Exposed populations – intravenous drug users, gay men having unprotected sex or anyone who feels they don’t have control over how and with whom they have sex – would be further encouraged to use microbicides, vaginal rings and pre-exposure prophylaxis (PrEP) – the most common of which, Truvada, has been shown to reduce infection rates by up to 78 percent.

Post-exposure prophylaxis (PEP), a sort of morning-after pill for HIV which is effective up to 72 hours after infection, is already recommended to victims of sexual assault. But organisers want to increase awareness among doctors and hospital staff, who can be unfamiliar with when and how to use PEP.

Harrington says this year’s Affordable Care Act and will mean most New Yorkers will have healthcare and its prevention mandate will encourage more regular testing, prevention and treatment.

But organisers know they have their work cut out for them. For one, the image of AIDS as a survivable disease can be an obstacle.

“Younger gay men are not having as much sex with condoms as they did 20 years ago, when people were dying all around them,” said Harrington. “The reality is it’s far from over and there’s going to need to be a lot of resources and political action to end it.”

With the CDC predicting that half of young gay men will have HIV by the age of 50, ending AIDS is not a choice, he says.

“More than 30 million people have died and because of activism and research we have these amazing tools. We have a humanitarian imperative to do it but it also makes economic sense and as human beings if we have a chance to end the suffering, we have an obligation to do that.”

Other groups, including Vocal-NY, ACT-UP and GMHC have joined the coalition.

And after several activist think tanks and meetings with state officials, King is optimistic that Governor Andrew Cuomo will include a variation of their proposals in his 2014 State of the State in January. Doing so would send a message to other states.

If the crisis were to come full circle and end as a pandemic in the city where it first gained infamy, the implications globally would be huge, says Simon Bland, director of the New York Office of UNAIDS.

“How do we ensure that the complacency doesn’t set in? I think that if states like New York can take it that last lap, it can really provide this bellwether to say that it can be done.”