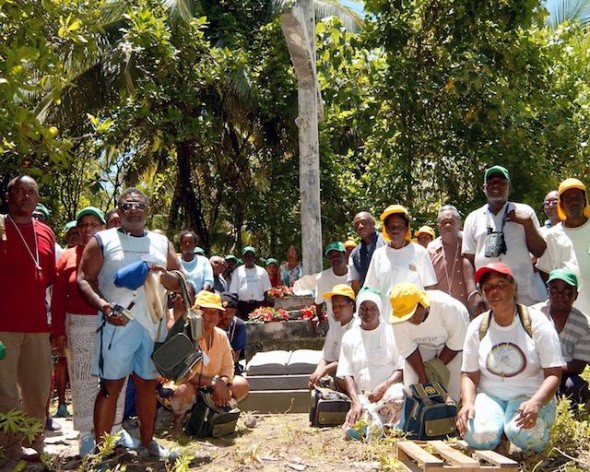 The Chagossians pictured here when they visited the archipelago in 2006. Many are still fighting to return to the islands they were evicted from almost 40 years ago. Courtesy: Chagos Refugees Group (CRG).

PORT LOUIS, Feb 20 2014 (IPS) - “The Marine Protected Area (MPA) created around the Chagos archipelago is a new obstacle that the British government has placed in our path to prevent us from going back to our homeland,” claims Olivier Bancoult, leader of the Chagos Refugees Group (CRG).

For the past 40 years, the Chagossians have been fighting to return to their home in Chagos archipelago, a set of 55 islets situated 1,200 km north of the Indian Ocean Island of Mauritius.

They lived there for five generations until the early 1970s when the archipelago was excised from Mauritius by the United Kingdom. The Chagossians were evicted and the archipelago now forms part of the British Indian Ocean Territory (BIOT).

How the Chagossians lost their archipelago

The U.K., which was the colonial power in the region at the time, granted Mauritius independence in 1968, but kept control of the archipelago and evicted the Chagossians.

An island, Diego Garcia, on the archipelago was leased to the United States for 50 years as a military base.

The lease agreement between the U.K. and U.S. ends in 2016, however, it comes up for negotiation this year.
However, the Chagossians feel that the 2010 creation of the MPA, which does not allow for human settlement on the Chagos archipelago or travel there unless one is in possession of a permit from the U.K. government, prevents their resettlement.

“We’ll not give up,” Bancoult tells IPS as he prepares for a new legal battle against the British government, which will be heard by the High Court of Justice in London on Mar. 30.

Bancoult was four when he and his mother, Rita, came to Mauritius. In 1983 he created the CRG to defend the rights of his community and over the years the organisation has staged numerous public demonstrations and hunger strikes.

The MPA covers almost 545,000 square kilometres and aims to protect the natural resources of the Chagos archipelago by implementing strict controls over fishing, habitation, damage to the environment and the killing, harming and collecting of animals.

The U.K. Foreign and Commonwealth Office (FCO) designated the archipelago as an area that needs to be preserved “on the basis that the archipelago is one of the most precious, unpolluted, tropical ocean environments left on earth.” 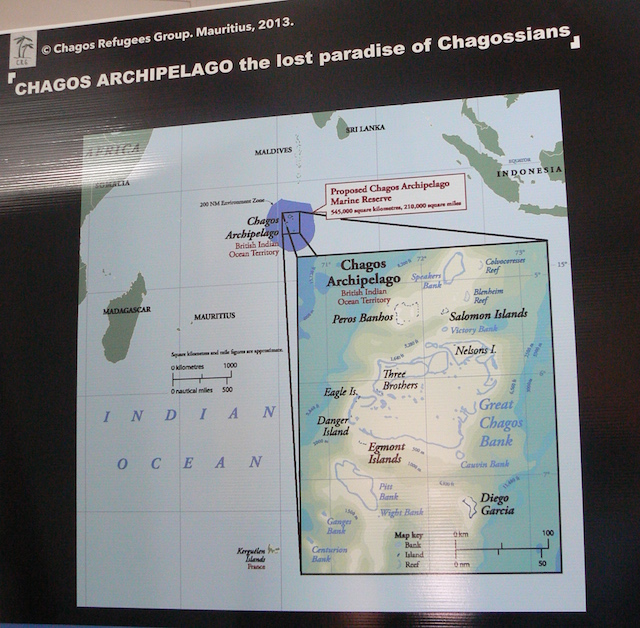 A map of the Chagos archipelago which shows the proposed Marine Protected Area. Courtesy: Nasseem Ackbarally

Following a feasibility study in 2002, the FCO concluded that resettlement on the Chagos archipelago was unfeasible due to the islands’ low elevation and “the islands are already subject to regular overtopping events, flooding and erosion of the outer beaches.” It also said that “as global warming develops, these events are likely to increase in severity and regularity.”

However, scientists Richard Dunne and Barbara Brown, who have been working on coral reefs in the Indian Ocean for several decades, do not agree.

Dunne tells IPS that the British government has been presenting these findings to Parliament, court and the public for the last 10 years as an argument against the resettlement of the Chagossians back in their homeland.

“We now know that the feasibility study was scientifically flawed and that little reliance can be placed upon its conclusions,” he says, adding that this may be partly the reason why the FCO is undertaking a new feasibility study this year.

“The Chagos are low-lying coral islands with a mean elevation above sea-level of only about two metres. As a consequence, they are like the Maldives to the north — very susceptible to changes in mean sea-level, storms, erosion and flooding,” he says.

But Dunne sees no reason why the Chagossians cannot return to the archipelago.

“The Chagossians have lived on these islands for nearly two centuries, and on the scientific evidence that we have today, there is no reason that they should not continue there for at least the foreseeable future, by which I mean the next four or five decades.”

Bancoult believes his people can live in such an environment.

“How come Europeans, Americans and other wealthy people from elsewhere are staying for months on Diego Garcia, Peros Banhos and Solomon Islands which are part of archipelago, while Chagossians cannot live there?” he asks.

Simon Hughes, secretary of the Chagos Conservation Trust (CCT), an organisation that has been working to conserve the biodiversity and marine ecosystem of the Chagos archipelago for the last 20 years, denies the MPA was designed to keep Chagossians from returning.

“The MPA is only three years old. Neither would the MPA be a very effective tool for this purpose. Its framework can be revised to accommodate a local population if there is one in future,” he tells IPS.

“Since under the law of BIOT there is no right of abode in the territory and all visitors need a permit, the creation of a marine protected area has no direct immediate impact on the Chagossian community,” Hughes adds.

The CCT also argues that sea level rise and erosion continue to be a problem for the islands.

According to the CCT, the benefits of an MPA around the Chagos are manyfold. It says the absence of a settled human population, the strict environmental regime and the minimal footprint of the military base on Diego Garcia have enabled a high level of environmental preservation to have occurred.

“The islands, reef systems and waters around the Chagos in terms of preservation and biodiversity are among the richest on the planet and they contain about half of all the reefs of the Indian Ocean which remain in good condition,” Hughes explains.

British lawyer and lead counsel for the Chagossians, Richard Gifford, tells IPS that the Chagos is a magnificent place to live but “obviously, there are problems to address in restoring the infrastructure, the economy, the housing and the transport but the prospects are extremely positive.”

Most of the original 1,500 Chagossians have passed away. Currently, the remaining 682 are determined speak out about the MPA.

“We are working on our own resettlement plan that we will submit to the three governments involved — Mauritius, the U.K. and the U.S. — later this year,” Bancoult says. 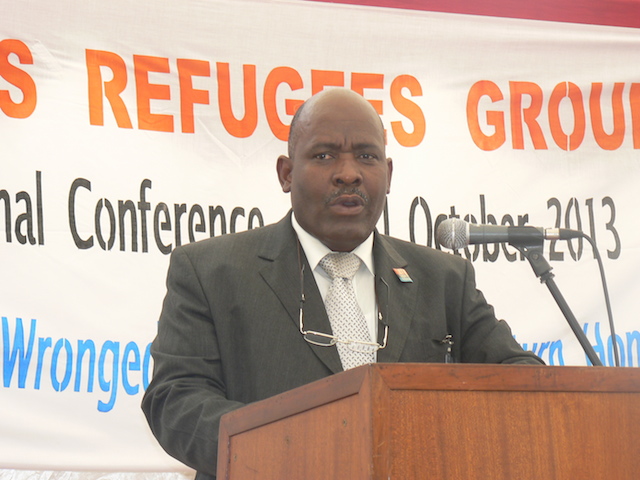 Olivier Bancoult, leader of the Chagos Refugees Group (CRG), feel that the 2010 creation of a Marine Protected Area (MPA) created around the Chagos archipelago, prevents the resettlement of the Chagossians. Credit: Nasseem Ackbarally/IPS