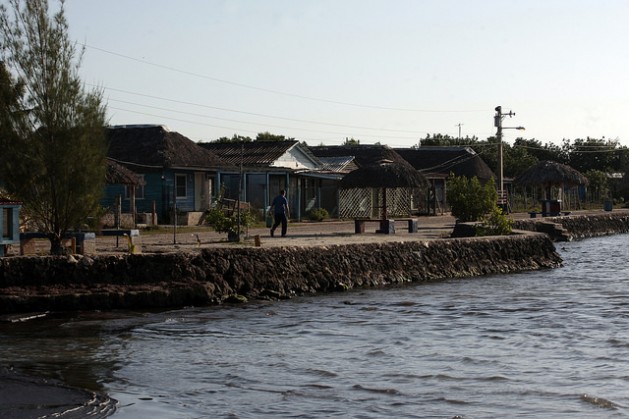 HAVANA, Mar 25 2014 (IPS) - The road to Guanímar, a fishing village on the southern coast of Cuba, is as narrow as the future of its 252 inhabitants, who don’t want to abandon the area despite its vulnerability to hurricanes, storm surges and flooding.

“If they can’t fish, the people here won’t know how to make a living,” Maricela Pérez, 63, who lives just a few metres from the beach, tells Tierramérica with a look of anguish.

“We can’t stand to live anywhere else. We were born and raised here,” says Mayelín Hernández, a homemaker who returned to the coast two years ago.

She says many of the families who have been relocated to safer areas by the local government have returned to this settlement of 152 precarious shacks, to keep fishing in the Gulf of Batabanó as their forebears did.

“They close up their house in Alquízar (a nearby town) and they spend more time here, in the ‘quimbos’ (shacks built with materials salvaged from the remains of houses destroyed by hurricanes),” says the 41-year-old Hernández, who comes from a fishing family. She left a small rural property nine km from the coast to return to the beach.

The old dilemma of leaving everything behind for safety reasons has reemerged with the new zoning regulations being implemented in Cuba for residential or commercial areas or protected zones, such as the coastline.

The policy is aimed at combating irregular and illegal building and land-use practices and updating the land registries and zoning plans for Cuba’s 168 municipalities.

Guanímar is along a stretch of coastline south of Havana which, along with the northern coast in the capital, is the area most vulnerable to flooding and high winds during storms in this archipelago located in the Caribbean hurricane corridor

Scientists estimate that by 2050, the rising sea level will have covered an additional 2.3 percent of the national territory.

The new zoning laws put a priority on the country’s 5,746 km of shoreline, which includes the Isla de La Juventud – the second-biggest island in the Cuban archipelago – and 2,500 keys and islets, and on the enforcement of six specific laws, especially decree-law 212 on management of coastal zones, in effect since 2000.

The laws prohibit activities that fuel natural soil erosion, such as construction or the use of vehicles in the dunes; roads or walls parallel to the shoreline; the felling of mangroves; and the introduction of exotic species.

One example of strict application of the law is the city of Holguín, 690 km northeast of Havana, where sun and beach tourism is flourishing. As of July 2013, the local authorities had demolished 212 public buildings that had been built on the dunes.

“The aim is to protect the environment and carry out climate change adaptation actions,” Yailer Sánchez, an environmental inspector in the government’s Environment Unit, tells Tierramérica.

Construction of private buildings on the sand is the most frequent violation of decree-law 212, according to Sánchez. The objective of the authorities is to eliminate all illegal buildings and relocate the inhabitants within the next two years.

Because of the sensitive nature of the issue, the government says the 245 coastal communities in the area will receive “special treatment” in the process.

But the enforcement of the new zoning laws has altered the heavy calm that usually reigns over Guanímar, except during the four months of summer, when thousands of people flock to its beach, visitors fill up all of the houses and shacks, and locals do brisk business selling fried fish and other tasty snacks.

“This is the best beach around here,” says Hernández. “Why not admit it: we don’t want to leave. We quickly measured when (the authorities) came and said they were going to remove everyone with houses 50 metres from the sea…Mine’s 53 metres away,” she adds.

Narciso Manuel Rodríguez, a 59-year-old fisherman who owns his own boat, comments that “They say they’re going to give people homes away from here. But I prefer to evacuate during storms and come back, like I always have.”

The policy is to relocate the inhabitants of at-risk areas, and block construction of new homes.

Rodríguez’s daughter was resettled in Alquízar after Hurricane Charley destroyed her home on Aug. 13, 2004.

Another group of families from Guanímar was relocated to the town in 2008 after the area was hit by Hurricanes Gustav and Ike.

Gustav “hit with all it had” when it passed four km off the coast, the fisherman says.

In October 1944, Guanímar experienced one of the worst storm surges in Cuban history, that was up to six metres high and penetrated as far inland as 12 km.

When there is a threat of hurricane or tidal wave, the 57 families who live right along the beach pack up their belongings, including their small livestock and pets, on local government trucks.

“At those times, people feel that the risk is real,” says Guanímar town councillor Ricardo Álvarez.

The local population “doesn’t know very much about environmental problems. We don’t even get the newspaper here,” he says.

Álvarez says people need information and should participate more in decision-making. “It’s important to understand that these things are difficult for people to deal with,” he adds.

The government shop that sells the basic food and other products provided at subsidised prices under the ration card system will also have to be removed from the dunes, as a result of the new zoning laws.

The primary school closed six years ago. And a physiotherapy hospital that offered treatment based on medicinal mud, which was devastated by the 2008 hurricanes, was never rebuilt.

“People get used to living with the danger, and have their reasons for wanting to stay where they are,” biologist María Elena Perdomo tells Tierramérica. “Educational work is needed to convince people, and when the time comes, legal measures can be taken as well.”

A study by architect Celene Milanés found that in 2012, 90 to 95 percent of residents surveyed in the beachfront towns of Chivirico and Uvero and the coastal city of Santiago de Cuba, in the east, were unfamiliar with decree-law 212.

Coastal areas are home to 60 percent of the world population, who are at risk due to rising sea levels. More than 180 countries have large populations in low-elevation coastal zones, and 130 countries have major cities within a few km of the coast.