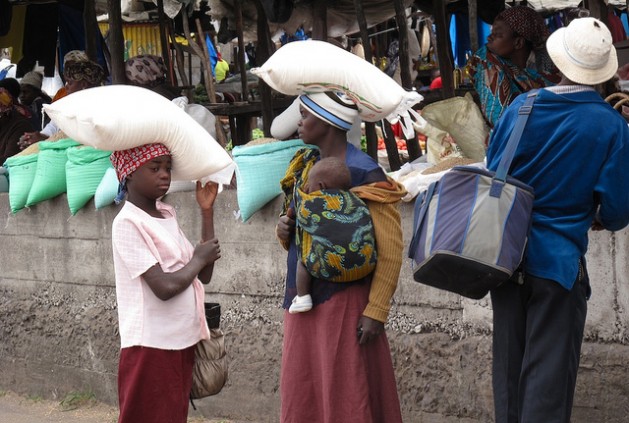 Informal traders at Malanga market on the outskirts of Maputo, Mozambique. Most of the products on offer are purchased in Zimbabwe or South Africa. Credit: Nastasya Tay/IPS

WASHINGTON, Apr 18 2014 (IPS) - As the World Bank wrapped up its semi-annual joint meetings with the International Monetary Fund (IMF) here last weekend, it reaffirmed its commitment to bringing extreme poverty below three percent of the global population by 2030 while increasing the income of the poorest 40 percent of the population of each country.

However, some suggest that in sub-Saharan Africa, this may be impossible.

It’s not easy to fix a country, rebuild institutions and get growth going while making sure it’s consistent, shared and inclusive. Poverty pockets exist in the large, vital countries.

“Even under our ‘best case’ scenario of accelerated consumption growth and income redistribution from the 10 percent richest to the 40 percent poorest segment of population, the 2030 poverty rate would be around 10 percent,” says a new report from the African Development Bank (AfDB). “A more realistic goal for the region seems to be reducing poverty by a range from half to two thirds.”

Although extreme poverty will likely remain high in Africa by 2030, AfDB’s chief economist, Mthuli Ncube, the new report’s chief author, painted a cautiously optimistic picture as to the prospects for poverty reduction in Africa during an interview with IPS.

Q: Even though the World Bank goal is to reduce extreme poverty by less than three percent globally by 2030, Africa won’t be able to meet that goal. Can you give us more background as to why that is?

A: Our view is that it’s a good goal to have … but it differs from region to region. The region that is likely to achieve this ambitious goal is Asia, not Africa. Although Africa has made tremendous progress, there’s still a lot of work to do. Under our baseline scenario, Africa will achieve something like 25 to 27 percent poverty levels in the year 2030. Currently it’s about 48 percent. So in this case we’re talking about something like a 50 percent reduction, maybe.

It’s a monumental task. Why? We’ve some challenges in Africa. One is fragility. If you look at some of the large countries with a lot of poverty – like the [Democratic Republic of Congo], it is a fragile country. It’s not easy to fix a country, rebuild institutions and get growth going while making sure it’s consistent, shared and inclusive. Poverty pockets exist in the large, vital countries.

Even if you have growth, growth is just simply not shared. If you use a more inclusive definition of growth and poverty reduction … service delivery around health care and education is very difficult. These are large countries where governments are decentralised.

Q: Nigeria is one of the more populous countries, and it’s now surpassed South Africa as Africa’s largest economy. Yet it still seems like there’s a large degree of extreme poverty there. How does income inequality play into extreme poverty?

A: In Nigeria, the new figure says that the size of the economy is 510 billion dollars, larger than South Africa. Income per capita has gone up to about 2,400 dollars, so it looks much better than before. But after this announcement, it doesn’t change people’s lives. They’re still poor. So it becomes an overall aggregate figure and that speaks to inequality.

Inequality is high and it also has a way of slowing a country down in its poverty-reduction drive. The more poverty you have, the less productive you become, which impacts your ability to grow.

Our analysts show that the long-term [obstacle] in dealing with extreme poverty is to get the children of the poor into school, to have them stay in school and finish school. That is the only way. Education is the biggest driver of getting people out of extreme poverty … and into the middle class. And then, because they all have decent incomes and jobs, they will keep their children out of poverty.

There are countries in Africa trying to do that – Rwanda, South Africa and Ethiopia. Ethiopia is the one country that I think is going to rotate out of extreme poverty by 2030, so it’s going to be the most successful in dealing with poverty out of the large-population countries.

Ultimately there need to be some short-term measures, but the long-term measure is education.

A: Ethiopia is the one that we can really highlight because it’s a large population, nearly 85 million, and they’re dealing with the reduction of extreme poverty as a problem. First, the big story about poverty reduction is sustaining growth, and Ethiopia’s had a wonderful growth rate for the past 10 years.

Second is making sure that it’s inclusive, shared and creates opportunity. It should create jobs and finance services for access to education, health, housing and so forth. All those are strategies for sharing wealth.

It’s also about social protection programmes that keep the people out of poverty and then allow them to make progress. Let me tell you this story about the Grinka Programme in Rwanda. You leave one pregnant cow to a poor household, and that cow will have a calf and another one and so forth. And if it’s a female calf, you pass that calf on to the next poor family and then the next poor family.

In the next few years, that programme is going to take about 300,000 families in Rwanda out of poverty. Why? These families can harvest the milk and consume it. Secondly, they can sell the milk and the manure, but also use [the manure] to grow vegetables, which they can then sell and make money. So you create a whole economic ecosystem around the cow.

I even suggested this for Somalia. Maybe there’s an asset-replacement programme that could cause similar results elsewhere. This is a case of what I would call productive social protection, because you’re giving someone an asset that produces something and it actually works.