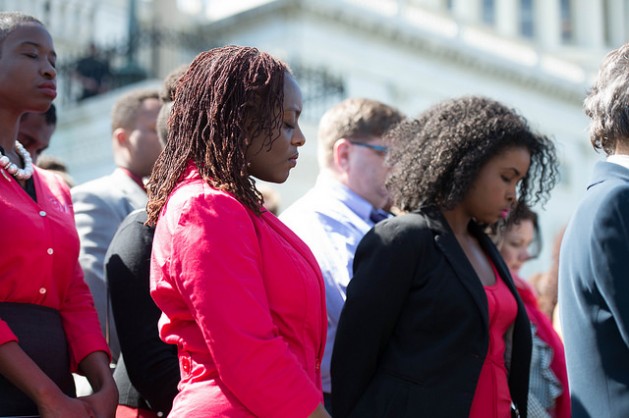 A moment of silence in held in Washington, DC May 6th for the 234 missing Nigerian school girls who were abducted by Boko Haram on Apr. 14. Credit: Senate Democrats/cc by 2.0

WASHINGTON, May 15 2014 (IPS) - Amidst intensifying concern over the fate of more than 200 girls abducted by a radical Islamist group in northern Nigeria, at least 100 representatives of various activist groups Tuesday pressed the U.S. Senate to approve legislation designed to prevent and respond to violence against women and girls and discourage child marriages around the world.

Introduced by a bipartisan group of senators last week, the International Violence Against Women Act (IVAWA) would use existing foreign aid to achieve the bill’s major aims and mandate greater coordination of existing U.S. government programmes that address gender-based violence.

“If passed, it would mean there would be enduring legislation and policy in place by the U.S. government towards violence against women that would not be based on the politics of any particular administration,” Jacqueline Hart, vice president for strategic learning, research, and evaluation at American Jewish World Service (AJWS), told IPS.

IVAWA is no stranger on the Hill; its previous version was shelved as a result of right-wing Republican concerns that it could be used to support abortions and other women’s reproductive rights. The latest version was introduced in the House of Representatives late last year, where it was referred to the House Committee on Foreign Affairs.

Gender-based violence is one of the world’s most prevalent human rights abuses, and has one of the greatest degrees of impunity surrounding it, according to the activist groups, including Amnesty International and Human Rights Watch.

At least one in three women has been beaten, coerced into sex, or otherwise abused in her lifetime, according to U.N. Women.

“This Act makes ending violence against women and girls a top diplomatic priority,” Republican Sen. Susan Collins, one of the bill’s co-sponsors, said in a press statement.

“The world has just seen an appalling example of women and girls being treated as property and political bargaining chips in Nigeria, where the terrorist group Boko Haram kidnapped nearly 300 school girls and is threatening to sell them into slavery and forced marriages.

“Sadly, this is not a viewpoint limited to terrorist leaders: the International Center for Research on Women (ICRW) says one in nine girls around the world is married before the age of 15, a harmful practice that deprives girls of their dignity and often their education, increases their health risks, and perpetuates poverty.” 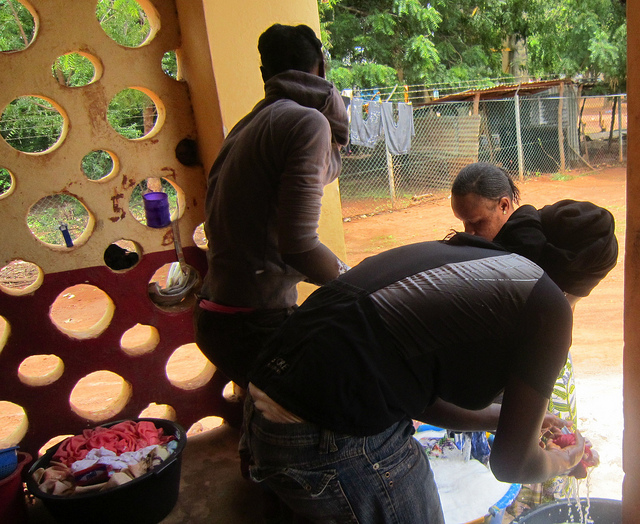 Indeed, in addition to supporting programmes designed to support national legislation criminalising violence and abuse of girls and women, to provide training to police, prosecutors, and judges to handle such cases, and expand health facilities for women and girls, the bill would support projects aimed at offering girls and women more choices in life, particularly in education and economic opportunity, particularly in countries where early marriage is commonly practiced.

About 14 million girls are married before the age of 18 every year, according to Girls Not Brides. The largest proportion of early marriages occurs in Africa’s Sahel region.

In Niger, some 75 percent of girls are married early, followed by the Central African Republic and Chad. Early marriages occur in every region of the world, with the largest number in India.

According to UNIFEM, 64 million girls are child brides worldwide.

Early marriages inflict abuse on girls and women in many ways, from sexual violence to poor health.

They also increase the chance of physical or sexual abuse in a relationship. In Ethiopia, 81 percent of child brides describe their first physical experience as forced.

The research, not yet formally published, focuses less on the appropriate age for marriage than on the role played by the institution of marriage in India’s social structure.

“When we talk about early marriage, it is always the early part we talk about, but what about the marriage part?” asked Archana Dwivedi, deputy director of Nirantar. “What is magic about the age 18?

“We often used child marriage as synonymous for forced marriage, but that is not the case,” she told IPS. “All marriages under 18 are not forced, and all marriages above 18 are not chosen. Imagine a gay boy married to a girl or a lesbian girl married to a man? It can be equally, if not more traumatic, because marriage is also license to have sex.”

Focusing on the age of 18 also diverts attention from girls over 18 who are still suffering the consequences of marrying young, she said. Although often overlooked, these consequences extend beyond the physical health of the women.

“There is too much focus on maternal health, which reinforces the patriarchal thinking that women are there to reproduce healthy children….What about her mental health, how she feels? After marriage, all the opportunities in her life are a given…there is nothing left in life to dream of or desire.”

Dwivedi argued that organisations working to end child marriages need to apply different indicators in assessing the effectiveness of their work.

While many organisations report how many early marriages they helped prevent or delay, they often fail to address the necessity of changing social and cultural attitudes about early marriage, as well as the institution itself.

Acceptance of conventional explanations for early marriage, such as blaming it on poverty, is unlikely to change long-prevalent attitudes.

Focusing on expectations surrounding marriage itself, on the other hand, will more likely lead to a broader range of choices for girls and women and thus empower them.

“Even in urban upper class families, a parent will spend half the family’s money on the education of the son and half on the marriage of the daughter,” she said.

“The attitude is that parents think marriage is the only viable solution for girls…Parents are working with the best intentions to help get their child settled, not doing it to ruin their lives, but to stabilise them. But there’s something wrong with our idea of stability.”