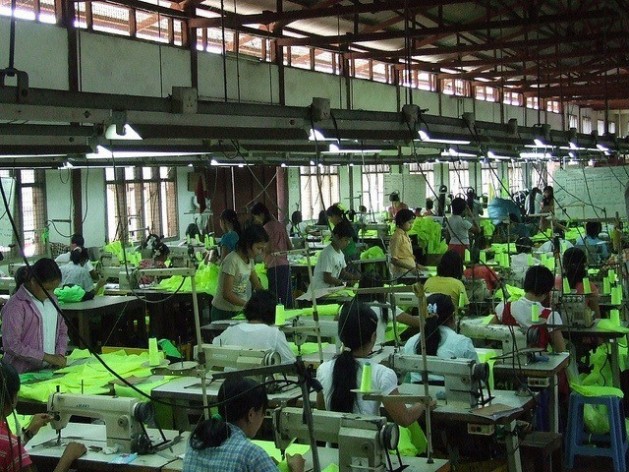 It is common to find young people working in factories in Rangoon. Credit: Mon Mon Myat/IPS

WASHINGTON, Jun 12 2014 (IPS) - U.S. companies newly operating in Myanmar have until the end of the month to file official reports detailing the actions they’ve taken to ensure that their investments comply with safeguards around land, human rights and other concerns.

Such ‘due diligence’ reporting was a key compromise between activists and the U.S. government after Washington lifted sanctions on U.S. investments in Myanmar (formerly Burma) in mid-2012. Yet rights advocates here who have looked at the first round of disclosures are warning that most companies are failing to file strong reports while some are refusing to engage in the process at all.

“Responsible U.S. investment has the potential to further the U.S. policy goal to support ‘the establishment of a peaceful, prosperous, and democratic state that respects human rights and the rule of law’,” notes the U.S. Campaign for Burma, a prominent watchdog group here, in its first-ever analysis of the new reporting.

“[…] Burma doesn’t yet have the infrastructure necessary for protections. We’re very concerned that the labour market is going to be worse in Burma than in other places.” -- Jennifer Quigley, executive director of the U.S. Campaign for Burma.
The group says its findings are meant to encourage investors “to make forthright disclosures, manage risks, commit to responsible stewardship and transparency, and engage with civil society.”

Of the nine reports by six companies that have been filed with the U.S. State Department thus far, the U.S. Campaign for Burma says only a one, from Coca-Cola, is satisfactorily thorough. Coca-Cola told IPS in a statement that when it re-entered the Myanmar market in mid-2013 after more than 60 years, it undertook the longest and most in-depth due diligence process in the company’s history.

“From the very outset of our re-entry into Myanmar, Coca-Cola went to great lengths to integrate respect for human rights into all of our business activities,” Rehan Khan, the general manager of Coca-Cola Myanmar, said in the statement. “We hope these efforts contribute to an industry-wide culture in Myanmar of ethical and responsible business development.”

Other U.S. investors do not yet appear to have gone to such lengths. The U.S. Campaign for Burma rates two companies, Western Union and Clipper Holdings, as “questionable” based on their reporting, while three others – Capital Group Companies, Hercules Offshore and Crowley Marine Services – are described as “irresponsible”.

The two questionable companies are criticised for filing incomplete information, while Hercules and Crowley are no longer operating in Myanmar and didn’t file at all. Capital Group, meanwhile, filed a report suggesting that the requirement does not cover its “passive” investments in Burmese companies, though activists say no such exemption exists.

“The whole [reporting] process seems to be quite a mess,” Jennifer Quigley, the U.S. Campaign for Burma’s executive director, told IPS. “It’s very frustrating how many companies are trying to skate by with the absolute minimum amount of disclosure – or to disregard this responsibility entirely.”

Spirit of the law

The due diligence reporting requirement came about following debate over how the United States would lift its ban on U.S. investment in Myanmar, which at the time was seen by officials as tentatively opening up following a half-century of military rule.

Rights advocates urged the administration of President Barack Obama not to allow U.S. investments in certain sectors – in particular in extractives and large-scale agriculture – due to concerns over longstanding abuses.

In the end the government decided that no sector would be off limits, but rather that companies would be required to file annual reports on their efforts to ensure that international standards were being applied around their investments.

Investors are thus required to file such a report six months after new investments reach 500,000 dollars, or following any investment in the oil and gas sector. Thereafter, annual reports are due at the beginning of July.

From a watchdog’s perspective, however, a key gap has remained in this policy: the extent to which corporate policies would be extended to local business partners. Foreign companies, after all, are required to partner with local partners, many of whom have longstanding ties to the military, yet Quigley says the reporting on this issue has been vague.

“The U.S. administration has only stated that the ‘spirit of the law’ is supposed to extend to complete transparency around naming Burmese partners,” she notes. “But from these reports it appears that companies are not complying with that spirit.”

Just three of the six companies have named local partners, and each of these identities has raised concerns among rights groups.

Meanwhile, several prominent U.S. companies that have recently re-engaged in Myanmar – including Ford, GE, Halliburton and PepsiCo – have so far failed to file due diligence reporting at all. While the companies claim the requirement doesn’t cover their actions, the U.S. Campaign for Burma disputes this.

GE told IPS it hasn’t yet reached the 500,000-dollar investment threshold, though other companies were unable to offer a response by deadline. The U.S. Treasury would ultimately levy penalties for any such delinquency, but a Treasury spokesperson declined to comment.

The reporting deadline is arriving just as Gap Inc., the clothing company, has announced that it would be moving some of its operations to Yangon factories, becoming the first U.S retailer to do so. At the U.S. Embassy in Yangon on Monday, U.S. officials stated that the company would be partnering with USAID, Washington’s main foreign aid agency, as well as CARE International, a humanitarian group, to invest in Myanmar’s “social and economic growth”.

“Through partnerships, such as this one today, we are working together to ensure that communities benefit from an economy re-entering the international marketplace,” Chris Milligan, the director of USAID’s Myanmar mission, said at the event, according to a release. “Through this effort and other initiatives, we are encouraging responsible investment to improve the welfare of all people of this country.”

Yet Gap has also indicated its potential interest in a contentious economic zone outside of Yangon known as Thilawa. Co-funded by the Japanese government, Thilawa is the farthest along of multiple SEZs currently being planned by the Myanmar government.

The project has already run into significant concerns around plans for the relocation of thousands of people.

“We really need to get this right the first time around, because the biggest concern we’re hearing is that Burma is going to be the new ‘labour floor’,” Quigley says.

“Yet the international community won’t realise it, because Burma doesn’t yet have the infrastructure necessary for protections. We’re very concerned that the labour market is going to be worse in Burma than in other places.”