UNITED NATIONS, Jun 10 2014 (IPS) - “My mother used to just stay at home, now she has come back and is an engineer and a leader. She is on the Village Energy Committee,” said a 10-year-old girl from the village of Chekeleni, in Tanzania’s southeastern Mtwara district. 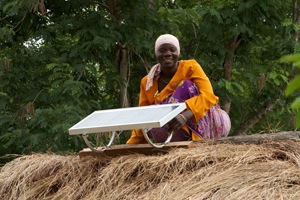 “When I grow up I will also be a leader. Maybe I will be the president,” she said.

Just over a year ago, homes in the village of Chekeleni were dark after sunset. Today they are filled with light from solar lamps as women bustle around cooking and children do their homework near the glowing lamps. At least 200 households now have their own solar installations for lighting and other electrical needs.

Six women have brought this light to three remote southern Tanzanian villages in the Mtwara and Lindi districts. They are among the 25 illiterate, rural mothers, many of them also grandmothers, from four African countries who were trained at the Barefoot College in Tilonia in the northwestern Indian state of Rajasthan, to install and maintain solar energy panels.

The programme was part of the 2011 ‘Rural Women Light up Africa’ initiative, a partnership between UN Women and the Barefoot College.

After six months the trainees graduate as Barefoot Solar Engineers and return to their villages to electrify households with solar lighting units and assume responsibility for their repair and maintenance for a period of five years.

“We hope this will be a challenge to other women who want changes and want to eradicate poverty,” said Mariam Luwongo, one of the engineers from the southern village of Nitekela.

These women not only bring electricity to their communities for the first time, but they also introduce a renewable and sustainable source of energy that can be maintained and replicated in other communities.

Despite being illiterate, of modest means and having never travelled outside Tanzania, within weeks of returning home, the six engineers have managed to set up a solar electricity system for the three small villages of Chekeleni, Nitekela and Mjimwema, in southern Tanzania, close to the Mozambique border.

Equipment is currently being procured locally to ensure that the entire community can benefit from their own solar system.

Villagers pay toward the costs of their equipment and its maintenance in installments over five years. These funds also ensure the women engineers receive a monthly stipend for their work.

Households that sign up to the initiative pay an initial deposit of 20,000 Tanzanian shillings (roughly 12 dollars) and then monthly installments that amount to around 60,000 shillings (approximately 37 dollars).

They receive one 20-watt solar panel, one 12-volt battery, one cell phone charger and three nine-watt lamps per household. The women assembled the equipment during their training in India. It was then purchased and delivered to Tanzania by UN Women.

Tangible benefits include savings on the cost of kerosene (a saving of about 1,000 shillings per month) and charging cell phones at the local market. There are also fewer health and safety hazards because highly flammable kerosene is no longer needed. 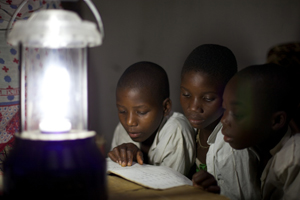 Children study in the evening thanks to a solar-powered lantern in the village of Chekeleni, southern Tanzania. Credit: Ben Langdon/VSO

Solar engineer Arafa Mwamba Halfani, from Chekeleni, said she and her colleagues were happy with their new skills and they would now try and light up other communities nearby.

Another positive impact of the lighting project has been the increase in women’s voice and independence. At least four of the nine members of the Village Energy Committees are women and in Nitekela the committee chair is also a woman. Financial, leadership and governance training is enabling them to plan and lead effectively, while simultaneously working towards sustainability.

All three Village Energy Committees are now formally registered community organisations with their own bank accounts. Many of these women have also become role models.

Even skeptics have been won over. In one of the villages, at an initial meeting when the idea of the solar engineers was introduced, one elder spoke on behalf of many and voiced doubts that these women could do the job.

Several months later, he sought out UN Women to support the programme and praised the women engineers who had installed solar equipment in his house and even repaired subsequent problems. He feels he is living a much better life thanks to these women.

Well-lit places also provide extra security and most member households have a light bulb at their door, which serves as a street lamp for passersby and can often help in reducing violence, particularly violence against women and girls.

A testament to the success of the programme is that the Indian Government has agreed to fund the set-up of a solar energy training centre just outside Mtwara in Tanzania.

The six Tanzanian women trained at Barefoot College headquarters will train new students in the skills they acquired in India. Based on proposed plans the establishment of this college will allow the ministry of community development, gender and children to extend this initiative to other regions around the country.

For solar engineers like Mariam and Arafa, solar power has provided a new beginning, a respected place in their community and a much brighter life.

This article is a contribution to UN Women’s campaign ‘Empowering Women – Empowering Humanity: Picture It!’ More at: beijing20.unwomen.org