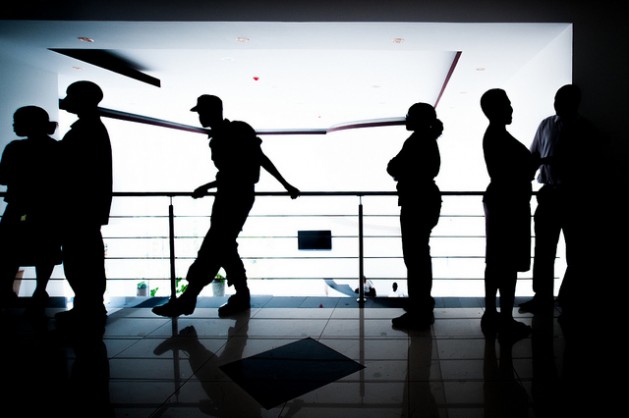 LGBT activists, human rights observers and police officers wait outside a courtroom in Uganda's constitutional court on Jun 25, 2012. Four activists had brought a case against Minister of State for Ethics and Integrity Simon Lokodo. Credit: Will Boase/IPS

WASHINGTON, Jul 31 2014 (IPS) - As the White House prepares to host more than 40 African heads of state for the upcoming U.S.-Africa Leaders Summit, civil society actors from the U.S., Africa and the international community are urging the Barack Obama administration to use the summit as an opportunity to more thoroughly address some of Africa’s most pressing human rights violations.

“While President Obama has unveiled specific initiatives to strengthen U.S. development work on the continent and connect it to core national security objectives, he has not done the same for human rights and the rule of law,” Sarah Margon, Washington director of Human Rights Watch,  said in the group’s 2014 Human Rights in Africa report.

“Evangelical extremists from the U.S. have contributed to making society more dangerous than it ever was before." -- Richard Lusimbo

Although the policy agenda for next week’s summit has received praise for its proactive stance on energy, security and economic development, human rights advocates from both Africa and the U.S. are specifically condemning the agenda’s lack of concern over two critical humanitarian issues: freedom of expression and rights for the LGBT community.

“On the two issues we’re discussing today, the administration should be more straightforward, open and critical about these issues occurring in many countries in Africa,” Santiago A. Canton, director of the Robert F. Kennedy Center for Justice & Human Rights, an advocacy group here, told IPS.

Canton spoke Wednesday about these issues alongside fellow human rights advocates, as well as African journalists and LGBT activists, who collectively agreed that the current state of both press freedom and LGBT equality across Africa is “unacceptable.”

“Right that leads to other rights”

Citing terrorism laws, access to funding, and discrimination against independent media  as some of Africa’s  main obstacles to free expression, Wednesday’s panel spoke first and foremost about the need for press freedom to be recognised as not only a human right, but also as a key factor in development.

“This is a right that leads to other rights,” Frank La Rue, the UN Special Rapporteur on the Promotion and Protection of the Right to Freedom of Opinion and Expression, said Wednesday.

Within his plea for governments to take a more active stance on freedom of expression and provide for more internet access, La Rue stated that 90 percent of young men in rural Africa already know how to use the internet, while 90 percent of rural women, who tend to be forbidden from the cyber cafes where such knowledge circulates, do not.

“If not everyone is convinced that freedom of expression and access to technologies are important development goals, then we cannot talk about things like education and access to health, especially women’s health…we need to first allow access to information,” he said.

In addition to urging that such freedoms be integrated into the next set of Sustainable Development Goals, La Rue has requested that the U.N. hire more legal and communications personnel to defend freedom of expression, adding that the understaffed office receives up to 25 cases per day.

Yet for Wael Abbas, a prominent Egyptian journalist, blogger and human rights activist, the blame rests primarily on the U.S. government alone.

“Egypt is the biggest country that receives U.S. aid – some in military, some in development – but if Egypt is  a dictatorship, and there is no regulation of how this money is being spent, than the U.S. is just bribing a corrupt regime and dumping huge amounts of money into the ocean,” Abbas told IPS.

Explaining how the Egyptian state is “waging a war against [independent journalists] and trying to destroy [their] credibility and presence,” Abbas argues that independent journalists like himself, who show “what is really going on in Egypt,” need assistance and attention paid to the fact that most media outlets are owned by corrupt businessmen.

A fundamental, not special, human right

Related to this call for a greater focus on freedom of expression in the press is the need for a more active U.S. role in protecting Africans’ freedom of sexual expression and identity.

“This is a time that we have to think about how we’re addressing sexual minorities’ rights overseas,” Kerry Kennedy, president of the Robert F. Kennedy Center for Justice and Human Rights, said in Wednesday’s discussion.

Citing Africa’s passage of an anti-gay law and the recent comment by Ugandan President Yoweri Museveni that “gays are disgusting,” Kennedy expressed disappointment that there has been “no real pushback” from the U.S. on LGBT rights in Africa. She said a concerted U.S. effort “could have helped a lot,” and that there are now many LGBT individuals in Africa who are afraid to attend HIV clinics for treatment.

Tom Malinowski, the U.S. assistant secretary of state for democracy, human rights and labour, considers such discrimination to be ironic on a continent that is diverse as Africa.

He spoke of the challenges posed by authoritarian leaders, both in Africa and around the world, who have called LGBT equality part of a “Western sexual agenda,” and believes it is extremely important for not only governments, but also artists, celebrities and business leaders, to challenge such a characterisation.

“This is a fundamental human right, not a special human right…everyone has the right to not be persecuted for who we are as human beings,” Malinowski said.

In addition to Kennedy’s suggestion that the U.S. pass legislation to create a special envoy for LGBT rights, Malinowski is calling on his government to provide “direct assistance” to people, such as doctors and lawyers, who serve on “the front line of the struggle,” and to continue to put LGBT equality “front and centre” in its diplomatic engagements.

Yet HRW’s Sarah Margon warns that the U.S. has sent “mixed signals” on this issue, and suggests that that the U.S. government is “simply paying lip service to human rights.”

Indeed, Richard Lusimbo, representative of Sexual Minorities Uganda, has similarly urged the U.S. to speak out more strongly, calling on Washington to “hold homophobic people responsible” for the subsequent discrimination in Africa.

“Evangelical extremists from the U.S. have contributed to making society more dangerous than it ever was before…and because we have no opportunities to go to radio and TV to show our side of the story, it makes things very difficult,” he noted.