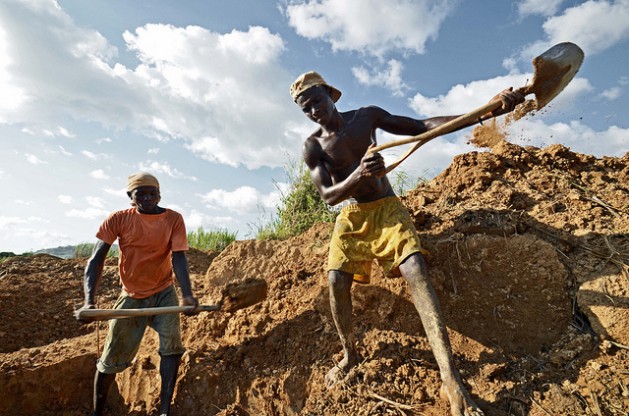 “The companies need to be held accountable, and we would ask President Obama to also support us in this message,” said Ali Idrissa, the national co-ordinator of Publiez Ce Que Vous Payez (Publish What You Pay, or PWYP), in Niger, a country rich in uranium and iron deposits.

Anti-corruption activists are losing patience with what they see as pressure by the extractive industries to prevent the emergence of tough new disclosure requirements.

“We need to look at the entire production chain of these extractive industries; we need to continue putting pressure on this industry …so we can fight poverty and corruption and ensure we have a better development,” he added.

Idrissa, one of scores of African activists who have descended on Washington for this week’s unprecedented gathering, was speaking at a forum sponsored by the Open Society Foundations (OSF), Global Witness, Human Rights Watch, and Oxfam America, among other groups, on civil society efforts to promote government and corporate transparency and accountability on the continent.

The activists, whose numbers are dwarfed by the size of official government delegations, most of which are led by heads of state, as well as U.S. and African corporate chiefs eager to explore business prospects, nonetheless claimed at least part of the spotlight Monday.

At what was billed as a “Civil Society Forum Global Town Hall” meeting at the National Academy of Sciences, both Vice President Joe Biden and Secretary of State John Kerry echoed Idrissa’s concerns in general remarks.

“Widespread corruption is an affront to the dignity of your people and direct threat to each of your nations,” Biden declared. “It stifles economic growth and scares away investment and siphons off resources that should be used to lift people out of poverty.”

Kerry also stressed the importance of “transparency and accountability” not only in attracting more investment but also in “creat(ing) a more competitive marketplace, one where ideas and products are judged by the market and their merits, and not by a backroom deal or a bribe.”

While their words gained applause, it was clear from the OSF forum that anti-corruption activists are losing patience with what they see as pressure by the extractive industries to prevent the emergence of tough new disclosure requirements from the Securities and Exchange Commission (SEC), the federal agency that regulates U.S. stock and related markets.

At issue is section 1504 of the 2010 Dodd-Frank Wall Street Reform and Consumer Protection Act, an anti-corruption provision that requires all extractive companies listed on U.S. stock exchanges to publish each year all payments they make to the U.S. and foreign governments in the countries where they operate.

According to the legislation, which is designed to counter the so-called “resource curse” that afflict many developing countries, particularly in sub-Saharan Africa, taxes, royalties, fees, production entitlements and bonuses should all be reported down to the project level.

Eight of the world’s 10 largest mining companies and 29 of the 32 largest active international oil companies would be covered by the Act, which requires the SEC to develop specific regulations to implement its intent.

After nearly two years of consultations with businesses, activists, and other interested parties, the SEC issued draft regulations, but they were immediately challenged in a lawsuit filed by the American Petroleum Institute (API), a lobby group that represents the powerful oil and gas industry here.

The SEC has since reported that it does not plan to resume the rule-making process until March, 2015, a source of considerable frustration for the anti-corruption activists.

In the meantime, the European Union (EU), whose member countries have historically shown much less willingness than Washington to enact legislation to deter bribery and corruption by its companies operating abroad, has adopted and begun to enforce its own tough disclosure measures that go beyond the energy and mining industries to include timber companies as well.

“Until 2000, corruption and bribery by European [companies] was not only legal; it was tax-deductible,” Mo Ibrahim, a Sudanese-British telecommunications entrepreneur and prominent philanthropist for good governance in Africa, told the OSF Forum. “The United States, which has been a leading light on corruption, is now dragging its feet. Do you have a backbone, or what?”

He echoed the concerns of an open letter sent to Obama and signed by the heads of the national chapters of PWYP, an OSF-backed international anti-corruption group, in Guinea, Niger, Tanzania, the Democratic Republic of the Congo (DRC), Chad, Ghana, and Nigeria, on the eve of this week’s Summit.

“It has been more than four years since you signed the Dodd-Frank Act, section 1504 of which obliges all U.S. listed extractive companies to publish the payments they make,” the letter, which was also signed by the African representatives on the PWYP global steering committee. “The law will yield crucial data that can help us hold our governments to account, but it has yet to come into effect.

“We ask you to urge the SEC for a swift publication of the rules governing section 1504 to ensure that they are in line with recent EU legislation and the emerging global standard for extractive transparency,” it said, adding that more also needs to be done to strengthen multilateral rules on taxation and creating a public registry of corporate beneficial ownership information as other critical parts of the anti-corruption struggle in Africa.

Harmonising the SEC regulations with those of the EU is particularly critical, according to Simon Taylor, co-founder and director of London-based Global Witness. “If the SEC gets it wrong, we will then have a double standard,” he noted, suggesting that some European companies could move to the U.S. if the latter’s requirements are less stringent.

API and other critics of the section 1504 have argued that strict rules will put U.S. companies at a disadvantage in bidding for mining or drilling rights, especially vis-à-vis China whose trade investment in Africa, particularly in the continent’s extractive resources, have exploded over the past decade and now far exceeds the U.S.

But Ibrahim said it was “not acceptable for Europeans or Americans to say, ‘We want to be moral and ethical, but we can’t until this guy’” joins. “China is learning; it can understand and can change. They’re trying to find their feet [in Africa].”

George Soros, the billionaire philanthropist who created OSF, as well as a number of other foundations, said it was important to get China on board because “otherwise they are the spoilers. It is so important that I think we have to be willing to reconsider the whole structure of the [EITI which] they consider [to be] a post-colonial invention.

“They have to be involved in the creation of the system that they will abide by. That’s where civil society in Africa can be influential,” he added.