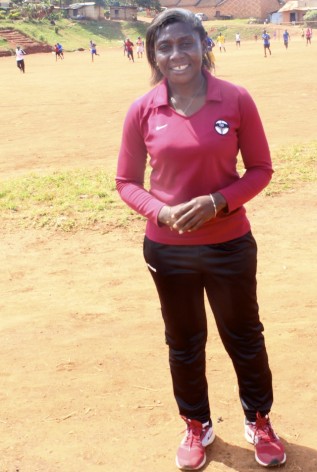 KAMPALA, Aug 23 2014 (IPS) - Growing up with five brothers, soccer-mad Majidah Nantanda had half a team to compete against at home in Makindye, a suburb in Uganda’s capital, Kampala. But at her school, in the 1990s, there were two sports rules: “Netball for the girls and football for the boys,” recalls the 32-year-old, as she stands on the sidelines of a boy’s game in Makindye.

“So I’d sneak out of netball to watch the boys play.”

From the age of eight, her brothers realised they had some fierce competition so they introduced her to the neighbourhood boys, who Nantanda would play with during her holidays.

“My mum never told me you’re not supposed to play football,” Nantanda tells IPS, adding her single mother, a businesswoman, bought her a kit and later gave her transport money to go to games.

Despite only getting a chance to perfect her talent in her spare time, it didn’t stop the Ugandan from captaining the first national women’s football team before becoming the first female national coach in 2007.

The country’s sports fans have been encouraged recently by Ugandan Stephen Kiprotich picking up gold in the men’s marathon in the London 2012 Olympics, and countryman Moses Kipsiro winning the 10,000m at the Commonwealth Games in Glasgow earlier this month.

But “there is no sport that promotes Uganda more than football”, Federation of Uganda Football Association (FUFA) spokesperson Ahmed Hussein insists.

“Even if people go and win medals at international level [in other sports], nothing beats football,” Hussein tells IPS.

Nantanda says women playing football in Uganda has become more accepted over the past 15 years.

Today in this East African country there are at least 64 girls’ schools competing in the annual national secondary girls football championships, and many other women who aspire to be the next Nantanda.

This month, in fact, a team of 18 female footballers from Uganda could have travelled to Canada to participate in the FIFA U-20 Women’s World Cup.

But instead of being cheered on by their country some 5,000km away in Ghana, the ladies, aged between 16 and 20 years, are getting on with their lives after having their hopes dashed at the last minute by a governing body that hasn’t grasped the potential of Uganda’s female football players, says Nantanda.

Nantanda says just three days before the match in Ghana, FUFA announced on radio that they had withdrawn the team, citing a lack of funds.

“Women’s football is not a priority for the nation,” says the coach.

“We are not catered for like the men’s national team.”

She adds: “The Cranes [the men’s national team] are paid a lot of money but women, they don’t take us seriously.”

A total of 25 aspiring sports stars, coached by Nantanda, trained for months while also studying at school or university and while holding down part-time jobs.

In defence, Hussein says Uganda is the only country among FIFA’s 209 members that doesn’t have an annual designated budget from the government. He stresses that although the government is “passionate” about the game, often approaching with support, the money they give isn’t enough.

FUFA are funded by local corporations such as Airtel, NIC and Nile Breweries, ticket sales and FIFA development grants.

The United Nations have stressed the potential contribution that sport can make towards achieving the Millennium Development Goals (MDGs), stressing it is about participation, inclusion and citizenship, and a certain percentage of FUFA grants must be spent on women’s football along with youth soccer and refereeing.

In 2004, Uganda’s football association was warned by FIFA that if they continued to use their yearly grant for the national team they risked losing it. In the past, FUFA have also denied corruption claims.

Nantanda sympathises with the girls. After all she has had her struggles.

“Not everyone’s happy that I’m a national coach,” she says, adding most soccer coaches in Uganda are male.

“A woman doing something different will straight away be attacked by men.

She adds: “If you’re not [emotionally] strong enough you’ll just give up.”

But that’s something Nantanda has never done, even when she’s been the only female alongside 60 men at an elite coaching session.

“I interact with these men and I do everything they do,” she says.

As one of only a few female FIFA-recognised referees in Uganda, Irene Namubiru, 34, has also smashed her own goals.

“[Women] enjoy playing football,” Namubiru tells IPS. “But they fear officiating because of the abuses, the insults from the fans, so they hold back.”

Nantanda doesn’t know when the under 20s team will play next.

Many women have stopped training and forgotten about football altogether.

Hussein says their Ghana match coincided with the men’s senior team travelling to South Africa for the African Nations Championship finals. Both competitions would have cost the federation “well over” 400 million shillings (153,552 dollars).

“People believe that the national senior team should be given a lot of precedence, as opposed to the women’s team or even to junior teams,” says Hussein.

“But we’re looking at entering the women’s team in future international tournaments.”

He says there could be a pilot project in the next couple of years in Uganda to form a women’s national football league.

“We believe that if the women’s team is properly handled they can get their own funding from different companies, the corporate world could come in and support them,” he says.

Nantanda still speaks to her under 20s and encourages them to train. But the coach, who admits she does mostly “volunteer work”, says she is putting more of her effort into “grassroots development”, encouraging girls in villages across Uganda to take up football through her charity Growing the Game for Girls.

Through Tackle Africa, Nantanda she is also getting rural communities hooked on football to teach them about HIV prevention and management.

There’s one piece of advice she gives all women, regardless of whether they have an upcoming tournament.

“Continue with your studies,” she reiterates.

“You won’t get paid through football.

“It’s not only about playing for the national team. I want these girls to be better women in the future and not waste their education.”