Tim Brewer is a Policy Analyst at WaterAid, a UK-based international charity. 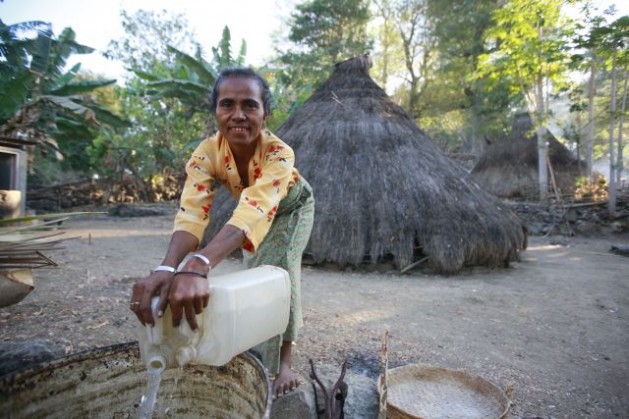 LONDON, Nov 24 2014 (IPS) - The Ebola crisis has thrown into sharp relief the issue of water, sanitation and hygiene in treating and caring for the sick. Dying patients are being taken to hospitals which never had enough water to maintain hygiene, and the epidemic has pushed the system to the breaking point.

Last week’s World Health Organisation report produced by UN Water, the Global Analysis and Assessment of Sanitation and Drinking Water (GLAAS), has provided a sobering picture of water and sanitation services so necessary to healthcare systems around the world.

Half of the lucky minority of rural poor who have gained access to improved water and sanitation are still using unregulated services which have no way to guarantee safety.

The annual analysis is a gold mine of data, covering 94 countries and using information from 23 aid agencies. The story it tells this year is of modest progress alongside inadequate funding, poor monitoring and a desperate need for skilled regulators, administrators and engineers to keep services running effectively.

Among GLAAS’s most important findings are how poorly finances intended to address the water and sanitation crisis are targeted.

Urban areas are prioritised over rural regardless of the level of need – nearly three-quarters of aid spending goes to urban areas and more than 60 percent of aid is in the form of loans, which are rarely targeted to the poor. This suggests rural people and the urban poor are being further marginalised.

Nearly three-quarters of the aid targeted at water, sanitation and hygiene programmes is spend on drinking water supplies. Despite these investments in improved supplies, 1.8 billion people drink water contaminated with fecal matter.

It’s fair to assume that this is linked to the 2.5 billion people still without a basic toilet. Too much money is being invested in finding or making clean water, and not enough in containing the waste that contaminates it.

Addressing these issues effectively requires money, training and monitoring, but these, too, are falling short.

The GLAAS report has found that financing for water and sanitation in 70 percent of responding countries covers less than 80 percent of the costs of operation and maintenance for existing services.

Regulators, administrators and engineers are all in short supply in developing countries. All are of critical importance in the safe, sustainable delivery of water and basic sanitation services, fundamental to good public health and economic growth. Yet it’s rare to see plans or investment to address this. Only one third of countries even have a human resources strategy in place.

Monitoring is also seriously lacking. WaterAid is examining the sanitation transformations that took place in East Asia, and has found that responsive monitoring which actually leads to changes in policy and investment is a crucial driver of sanitation improvements. But very few countries have enough personnel to collect or review data, or enough senior political interest to demand it.

Less than half of countries have a formal rural service provider that reports to a regulatory authority, and effectively monitors its services.

What does this mean? It means that half of the lucky minority of rural poor who have gained access to improved water and sanitation are still using unregulated services which have no way to guarantee safety.

But there is progress. Proposals for the U.N.’s new Sustainable Development Goals, now under negotiation, include goals for water and sanitation services that include schools and healthcare facilities along with households.

This is of huge importance, particularly when we look at the Ebola crisis in West Africa – where healthcare systems in Liberia and Sierra Leone in particular were broken in years of conflict and never properly rebuilt – or this year’s cholera outbreak in Ghana, where 20,900 people were infected and 166 died of preventable infection transmitted by water contaminated with human waste.

The GLAAS reports that less than one-third of countries have a plan for drinking water or sanitation in health care facilities and schools that is implemented, funded and reviewed regularly. These targets are long overdue.

The state of water and sanitation is a global health crisis. Some 10 million children have died since 2000 of diarrhoeal illnesses, directly linked to growing up without clean water, basic toilets and hygiene. It is possible to reach everyone, everywhere with water, sanitation and hygiene education, but it will require strong political will, a comprehensive and accelerated approach, and financing.

What the present shortlist does not include, but which the GLAAS report has clearly shown, is the need to find and train people to drive this transformation, and keep services running sustainably.