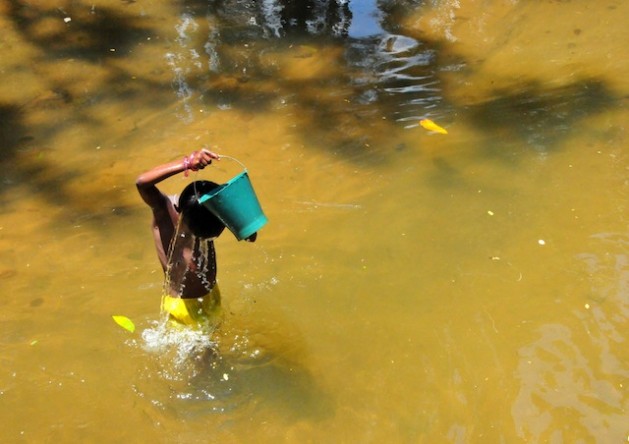 A Sri Lankan boy bathes in a polluted river. South Asia, home to 1.7 billion people of which 75 percent live in rural areas, is one of the most vulnerable regions to water shocks. Credit: Amantha Perera/IPS

STOCKHOLM, Sep 23 2014 (IPS) - A gift of nature, or a valuable commodity? A human right, or a luxury for the privileged few? Will the agricultural sector or industrial sector be the main consumer of this precious resource? Whatever the answers to these and many more questions, one thing is clear: that water will be one of the defining issues of the coming decade.

Some estimates say that 768 million people still have no access to fresh water. Other research puts the number higher, suggesting that up to 3.5 billion people are denied the right to an improved source of this basic necessity.

As United Nations agencies and member states inch closer to agreeing on a new set of development targets to replace the soon-to-expire Millennium Development Goals (MDGs), the need to include water in post-2015 development planning is more urgent than ever.

“In the next 30 years water usage will rise by 30 percent, water scarcity is going to increase; there are huge challenges ahead of us." -- Torgny Holmgren, executive director of the Stockholm International Water Institute (SIWI)
The latest World Water Development Report (WWDR) suggests, “Global water demand (in terms of water withdrawals) is projected to increase by some 55 percent by 2050, mainly because of growing demands from manufacturing (400 percent), thermal electricity generation (140 percent) and domestic use (130 percent).”

In addition, a steady rise in urbanisation is likely to result in a ‘planet of cities’ where 40 percent of the world’s population will reside in areas of severe water stress through 2050.

Groundwater supplies are diminishing; some 20 percent of the world’s aquifers are facing over-exploitation, and degradation of wetlands is affecting the capacity of ecosystems to purify water supplies.

WWDR findings also indicate that climbing global energy demand – slated to rise by one-third by 2030 – will further exhaust limited water sources; electricity demand alone is poised to shoot up by 70 percent by 2035, with China and India accounting for over 50 percent of that growth.

Against this backdrop, water experts around the world told IPS that management of this invaluable resource will occupy a prominent place among the yet-to-be finalised Sustainable Development Goals (SDGs), in the hopes of fending off crises provoked by severe shortages.

“We are discussing the goals, and most member [states] agree that water needs better coordination and management,” Amina Mohammed, the United Nations secretary-general’s special advisor on post-2015 development planning told IPS on the sidelines of the annual Stockholm World Water Week earlier this month.

What is needed now, Mohammed added, is greater clarity on goals that can be mutually agreed upon by member states.

Other water experts allege that in the past, water management has been excluded from high-level decision-making processes, despite it being an integral part of any development process.

“In the next 30 years water usage will rise by 30 percent, water scarcity is going to increase; there are huge challenges ahead of us,” Torgny Holmgren, executive director of the Stockholm International Water Institute (SIWI), told IPS.

He added that the way the world uses water is drastically changing. Traditionally agriculture has been the largest guzzler of fresh water, but in the near future the manufacturing sector is tipped to take over. “Over 25 percent of [the world’s] water use will be by the energy sector,” Holmgren said.

For many nations, especially in the developing world, the water-energy debate represents the classic catch-22: as more people move out of poverty and into the middle class with spending capacity, their energy demands increase, which in turn puts tremendous pressure on limited water supplies.

The statistics of this demographic shift are astonishing, said Kandeh Yumkella, special representative of the secretary-general who heads Ban Ki-moon’s pet project, the Sustainable Energy for All (SE4ALL) initiative.

Yumkella told IPS that by 2050, three billion persons will move out of poverty and 60 percent of the world’s population will be living in cities.

“Everyone is demanding more of everything, more houses, more cars and more water. And we are talking of a world where temperatures are forecasted to rise by two to three degrees Celsius, maybe more,” he asserted.

South Asia, home to 1.7 billion people of which 75 percent live in rural areas, is one of the most vulnerable regions to water shocks and represents an urgent mandate to government officials and all stakeholders to formulate coordinated and comprehensive plans.

The island of Sri Lanka, for instance, is a prime example of why water management needs to be a top priority among policy makers. With climate patterns shifting, the island has been losing chunks of its growth potential to misused water.

In the last decade, floods affected nine million people, representing almost half of Sri Lanka’s population of just over 20 million. Excessive rain also caused damages to the tune of one billion dollars, according to the latest data from the U.N. Office for the Coordination of Humanitarian Affairs (OCHA).

Ironically, the island also constantly suffers from a lack of water. Currently, a 10-month drought is affecting 15 of its 25 districts, home to 1.5 million people. It is also expected to drive down the crucial rice harvest by 17 percent, reducing yields to the lowest levels in six years. All this while the country is trying to maintain an economic growth rate of seven percent, experts say.

In trying to meet the challenges of wildly fluctuating rain patterns, the government has adopted measures that may actually be more harmful than helpful in the long term.

In the last three years it has switched to coal to offset drops in hydropower generation. Currently coal, which is considered a “dirty” energy source, is the largest energy source for the island, making up 46 percent of all energy produced, according to government data.

Top government officials like Finance Secretary Punchi Banda Jayasundera and Secretary to the President Lalith Weeratunga have told IPS that they are working on water management.

But for those who favour fast-track moves, like Mohammed and Yumkella, verbal promises need to translate into firm goals and action.

“If you don’t take water into account, either you are going to fail in your development goals, or you are going to put a lot of pressure on you water resources,” Richard Connor, lead author of the 2014 WWDR, told IPS.

The situation is equally dire for India and China. According to a report entitled ‘A Clash of Competing Necessities’ by CNA Analysis and Solutions, a Washington-based research organisation, 53 percent of India’s population lives in water-scarce areas, while 73 percent of the country’s electricity capacity is also located.

India’s power needs have galloped and according to research conducted in 2012, the gap between power demand and supply was 10.2 percent and was expected to rise further. The last time India faced a severe power crisis, in July 2012, 600 million people were left without power.

According to China Water Risk, a non-profit organisation, China’s energy needs will grow by 100 percent by 2050, but already around 60 percent of the nation’s groundwater resources are polluted.

China is heavily reliant on coal power but the rising demand for energy will put considerable stress on water resources in a nation where already at least 50 percent of the population may be facing water shortages, according to Debra Tan, the NGO’s director.