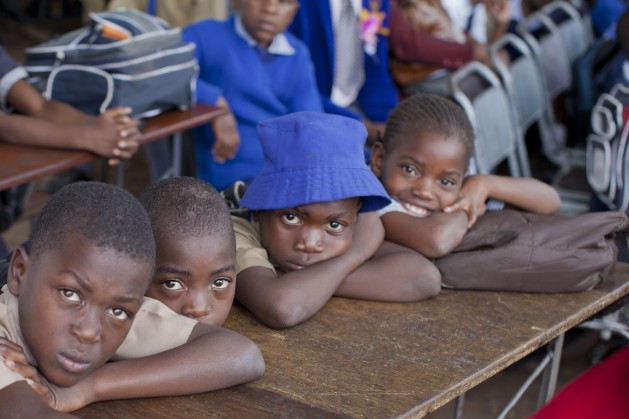 Primary school children like the ones pictured here in Zimbabwe's capital Harare often drop out of school, casting doubts on this Southern African nation's capacity to achieve universal primary education for all by December 2015. Credit: Jeffrey Moyo/IPS

HARARE, Dec 24 2014 (IPS) - Zimbabwe boasts of one of the highest rates of literacy across Africa but, but without free primary education, achieving universal primary education here may remain a pipe dream, educationists say.

It would also defeat Zimbabwe’s quest to reach the United Nations Millennium Development Goals (MDGs) by the deadline of 2015.

“Hordes of pupils enrolled in schools after independence at a time the Zimbabwean government made education free at primary school level,” Thabo Hlalo, a retired educationist from Zimbabwe’s Midlands Province, told IPS.

”But now without free primary education, school attendance has become intermittent, meaning that achieving universal primary education in line with the U.N. MDGs may remain imaginary for Zimbabwe.”

At independence in 1980, the Zimbabwean government abolished all primary school tuition fees, but they have now crept in and crept up. Parents not only contend with fees that they cannot afford but also with expensive essentials like notebooks and uniforms.

Early this year, Zimbabwe reportedly approached the United Kingdom for funds to help cover fees for an estimated one million pupils who would otherwise be forced out of school. The cash-strapped government said it was unable to finance its Basic Education Assistance Module (BEAM), a scheme meant for poor children.

The U.K. government provided 10 million dollars from its Department for International Development but warned it may be the last contribution.

The school fees have been defended by Zimbabwe’s Education Minister Lazarus Dokora, who has gone on record as saying that parents who default on the fees should be taken to court.

Dokora’s “warning” comes despite the fact that at least 95 percent of Zimbabweans voted in a referendum in March last year to adopt a new Constitution expressly granting free primary education to all. Specifically, Section75 (1) (a) of the Zimbabwean Constitution provides for the right to state-funded basic education.

Despite this constitutional provision, it is still a sad story for many children like 9-year-old Tobias Chikota from Harare’s Caledonia informal settlement located about 30km south-east of Harare, the Zimbabwean capital.

“I dropped out of school early this year because my unemployed parents couldn’t afford to pay my school feels,” Chikota, who at the time was in Primary Four, told IPS.

While it is a requirement for nations to ensure a predictable and adequate state budget allocation to education under the MDGs, civil society activists here say the Zimbabwean government seems way off the mark in terms of prioritising education.

“Despite the impending deadline for the attainment of the MDGs, our government has not been and remains inconsistent in its budgetary structures in practically directing money towards education, which may make the attainment of universal primary education for all difficult, if not impossible, by 2015,” Catherine Mukwapati, a civil society activist and director of the Youth Dialogue Action Network, a democracy lobby group in Zimbabwe, told IPS.

Earlier this year, the Zimbabwean government allocated 919 million dollars to the country’s education sector in its 2015 national budget announcement, but for Mukwapati these were “mere void commitments made on paper, hardly followed by action as customary with our government.

In spite of this gesture, a 2012 report by Zimbabwe’s Parliamentary Portfolio Committee on Education found that the country’s rural teachers are overwhelmed with work, operating at a ratio of one teacher to 60 pupils, far over the government-pegged teacher-pupil ratio of one to 40.

According to Save the Children, for over 3.2 million children enrolled in primary and secondary schools in Zimbabwe, there are only about 102,000 teachers.

A UNICEF report on the Status of Women’s and Children’s Rights in Zimbabwe released in 2012 says that at least 197,000 pupils drop out of primary schools each year, a situation that development experts here say hinders Zimbabwe from achieving universal primary education for all in line with the MDGs.

“School dropouts owing to lack of school fees, mostly at primary level, are peaking up annually and, therefore, talking about Zimbabwe achieving primary education for all by 2015 is a non-starter,” independent development expert Evans Dube told IPS.

And for many parents like 43-year-old Tambudzai Chihota, a widow whose six children are out of school due to non-payment of school fees, the promise of universal primary education means little.

“My children didn’t go beyond Grade [Primary] Five here because I had no money to pay their school fees and the universal primary education you talk about may not be my business as long as my children are still without access to further education,” Chihota told IPS.

The crisis facing the education system here has also been worsened by the flight of about 20,000 teachers from the country between 2007 and 2009 at the peak of Zimbabwe’s economic crisis.

Besides extremely low salaries, the Progressive Teachers’ Union of Zimbabwe (PTUZ), a teachers’ trade union organisation in Zimbabwe, says that morale is low among teachers, negatively affecting the quality of the country’s education.

“Universal education may be far from being achieved here by 2015 due to poor teachers’ salaries, causing a deterioration of the quality of education,” Raymond Majongwe, Secretary General of PTUZ, told IPS.

With just over 12 months left before the deadline for achievement of the MDGs, it appears unlikely that Zimbabwe will meet the target of universal primary education for all.