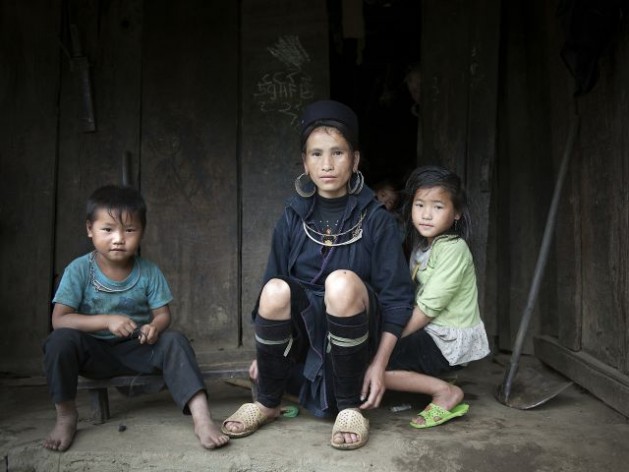 A mother and her three children, part of the indigenous Hmong group, in Sin Chai, northwestern Viet Nam. The general trend in world fertility rates shows they are in decline - due to a combination of factors, including economic development and the improved social role of women. Credit: UN Photo/Kibae Park

UNITED NATIONS, Jan 15 2015 (IPS) - Is below replacement level fertility the future for humanity? The answer to this seemingly simple question regarding human reproduction is not only of considerable demographic concern, but also has enormous social, economic and environmental consequences for the planet.

Aside from a global mortality catastrophe, the future size of the world’s population is determined basically by the number of children women bear. If the average number of births per woman remains more than about two, world population continues to increase.

However, if women on average have less than two births, then world population eventually decreases. A fertility rate of 2.1 births per woman under low mortality conditions is the replacement level, which over time results in population stabilisation.

Throughout most of human history women bore many children. In addition to offsetting high rates of infant and child mortality, a large number of children provided valuable assistance, needed labour and personal meaning to rural households as well as old-age support to parents.

At the beginning of the 20th century average global fertility was still about six births per woman. By 1950 world fertility had declined slightly to five births per woman, with less than a handful of countries having rates below the replacement level (Figure 1).

At that time, most of the largest countries, such as Brazil, China, Egypt, India, Mexico, Nigeria, Pakistan, and Turkey, had rates of six or more births per woman. In addition, 29 countries, including Afghanistan, Algeria, Dominican Republic, Ethiopia, Guatemala, Iran, Iraq, Kenya, Libya, Rwanda, Philippines, Saudi Arabia, Somalia, Syria and Yemen, had average fertility rates of seven or more births per woman.

As a result of the high fertility rates and comparatively low death rates, world population grew very rapidly during the 20th century, especially in the second half. World population nearly quadrupled during the past century, an unprecedented demographic phenomenon, increasing from 1.6 to 6.1 billion.

Also during the past 50 years, historic declines in fertility rates occurred, resulting in a halving of the world’s average rate to 2.5 births per woman. Those remarkable fertility declines are unequivocal and widespread, with lower rates in virtually every country.

In addition, the transition from high fertility to below replacement levels took place in all European countries as well as in Australia, Canada, Japan, New Zealand and the United States. The transition to below replacement fertility also occurred across a broad and diverse range of developing countries, including Brazil, China, Costa Rica, Iran, Lebanon, South Korea, Singapore, Thailand, Tunisia and Vietnam. In sum, 75 countries, or close to half of the world’s population, are experiencing fertility rates below the replacement level (Figure 1).

While future fertility rebounds cannot be ruled out, the general pattern over the last five decades has been unmistakable: once fertility falls below the replacement level, it tends to stay there. That trend has especially been the case for the many countries where fertility has fallen below 1.6 births per woman, such as Canada, Germany, Hungary, Italy, Japan, South Korea and Russia.

Some countries consider sustained below replacement fertility as a threat to their economies and societies and have attempted to return to at least the replacement level through various pro-natalist policies, programmes and incentives, including reduced taxes, subsidised care for children and bonuses. However, such government attempts have by and large not achieved their objectives.

The forces that brought about declines in fertility to historic lows are widely recognised and include lower mortality rates, increased urbanisation, widespread education, improvements in the status of women, availability of modern contraceptives and delayed marriage and childbearing.

Other important factors include the costs of childrearing, employment and economic independence of women, divorce and separation, the decline of marriage, co-habitation, childless lifestyles and the need to save for longer years of retirement and elder care. Those forces and factors are likely to continue and become increasingly widespread globally.

According to United Nations medium-variant population projections, by mid-century the number of countries with below replacement fertility is expected to nearly double, reaching 139 countries (Figure 1). Together those countries will account for 75 percent of the world’s population at that time.

With social and economic development, including those forces favouring low fertility, and the changing lifestyles of women and men, the transition to below replacement fertility in nearly all the remaining countries with high birth rates may well occur in the coming decades of the 21st century.