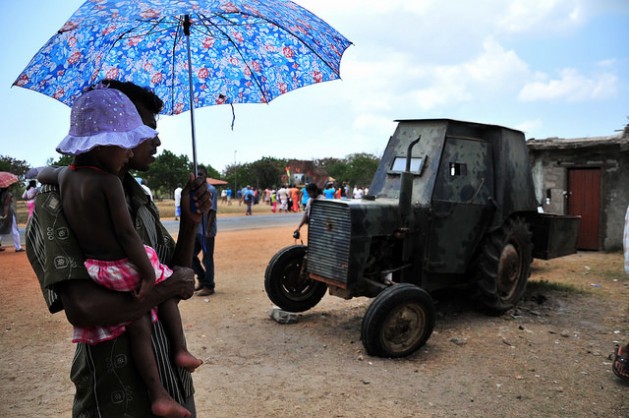 UNITED NATIONS, Feb 6 2015 (IPS) - Sri Lanka’s newly-installed government, which has pledged to set up its own domestic tribunal to investigate war crimes charges, is seeking political and moral support both from the United States and the United Nations to stall a possible international investigation.

Foreign Minister Mangala Samaraweera is due in the United States next week to press the country’s case before U.S. Secretary of State John Kerry and U.N. Secretary-General Ban Ki-moon.

“Any domestic investigation would not negate the need for continued international action and engagement to ensure justice and accountability in Sri Lanka, or Sri Lanka’s need to cooperate with the United Nations." -- David Griffiths

The United States was one of the prime movers of a resolution adopted last March by the 47-member Human Rights Council to appoint a U.N. panel, headed by former Finnish President Martti Ahtisaari, to probe into “alleged serious violations and abuses of human rights and related crimes by both parties in Sri Lanka” at the end of decades-old war between the government and the Liberation Tigers of Tamil Eelam (LTTE) back in 2009.

During his visit to New York, Samaraweera is also scheduled to meet with representatives of Human Rights Watch (HRW).

Asked about the new government’s proposed “domestic mechanism”, HRW’s Asia Director Brad Adams told IPS, “We do not expect the government to conduct a serious investigation.”

He specifically mentioned the former Army Chief Sarath Fonseka – who led the armed forces to victory against the LTTE – being a member of the current government thereby politicising any such domestic investigation.

Adams also hinted the investigation could get embroiled in local politics since the newly-elected president, Maithripala Sirisena, is planning to hold island-wide parliamentary elections in June this year.

“The United Nations should continue to be at the centre of the current process,” he added, but still complimented the government for reaching out to HRW.

“We are very encouraged and we are happy to meet with the foreign minister,” Adams said.

David Griffiths, deputy director for Asia-Pacific at Amnesty International, told IPS President Sirisena and other officials in the new administration have promised Sri Lanka will restore rule of law and conduct domestic investigations into alleged crimes under international law.

He said commitments have also been given to investigate the killing of journalists.

“These are important pledges which are to be welcomed, provided that the investigations are conducted promptly and in good faith, with independence, adequate resources and effective witness protection, and provided that where sufficient admissible evidence exists, they lead to the prosecution of those suspected of the crimes, regardless of their rank or status.”

What’s crucial, said Griffiths, is that a change in rhetoric must be matched by a change in political will and followed by action.

He pointed out that Amnesty International has documented Sri Lanka’s long history of ad hoc commissions of inquiry that have not delivered justice – the new administration must address this legacy of impunity.

“Any domestic investigation would not negate the need for continued international action and engagement to ensure justice and accountability in Sri Lanka, or Sri Lanka’s need to cooperate with the United Nations,” he declared.

Asked about the remote likelihood of Sri Lanka being hauled before the International Criminal Court (ICC) in The Hague, Dr. Palitha Kohona, Sri Lanka’s outgoing Permanent Representative to the United Nations and a former chief of the U.N. Treaty Section, told IPS, “The ICC acquires jurisdiction over an alleged violator of its provisions only after the relevant state becomes a party.”

Sri Lanka is not a party, but a state could voluntarily submit to the jurisdiction of the court.

“An individual can be indicted if his country is a party to the ICC Statute, or if the Security Council has referred the matter to the ICC or if a state voluntarily accepts the jurisdiction of the ICC,” he explained.

A prosecution is not automatic. It follows a long process of investigation, he added.

According to the United Nations, the United States included Art 98 (2) which prohibits a person being surrendered to the ICC contrary to the provisions of a state’s treaty obligations.

Another possibility, as in the case of non-ICC member Sudan, is that the Security Council can decide on hauling Sri Lankan individuals before the court.

But any such resolution in the Security Council could be vetoed either by China and Russia, or both, since they have close political ties to Sri Lanka –at least to the former government President Mahinda Rajapaksa, which denied war crimes charges and refused to cooperate with the U.N. investigations.

Amnesty’s Griffiths told IPS the adversarial relationship promoted by Sri Lanka’s former leadership vis-à-vis the United Nations was unhealthy and unproductive, and the new Sri Lankan government has now vowed to “prioritize” its engagement with the Office of High Commissioner for Human Rights (OHCHR).

The Sri Lankan government has committed to a large number of important reforms in a very short period of time, and international expertise and technical assistance could help it to fulfil its reform agenda, particularly where truth seeking, reparation and justice are concerned, he added.

“Amnesty International cannot stress enough the need for justice for the victims of appalling human rights abuses and their families,” Griffiths said.

“The Government of Sri Lanka has refused point blank to cooperate with the investigation despite being explicitly requested by the Human Rights Council to do so,” Zeid said.

The report of the U.N. panel is expected to go before the next session of the Human Rights Council in March. But Sri Lanka is seeking a deferment.