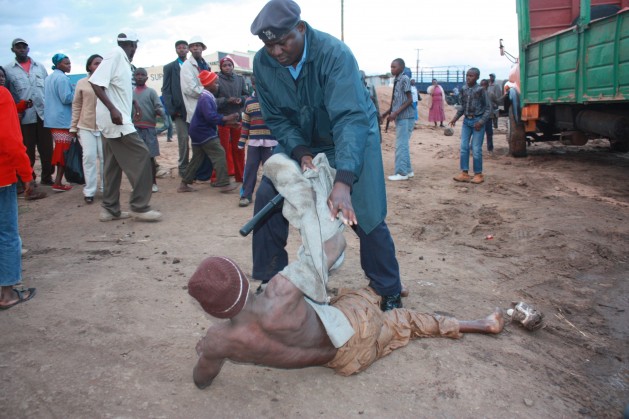 A crowd gathers to watch an intoxicated youth as a police officer comes to his rescue in Nyeri town, Central Kenya. Credit: Miriam Gathigah/IPS

Not even confirmed reports by the Ministry of Health and government agencies such as the National Authority for Campaign against Alcohol and Drug Abuse (NACADA) that illicit brewers have been turning to lethal embalming fluid used in mortuaries have cut the rate of abuse.

“Patrons want to spend as little as possible but drink as much as they can, so they opt for cheap illicit brews, especially spirits,” says Nduta Kamau, who brews home-made alcohol in the sprawling Mathare slums in Nairobi.

The [Kenyan] Alcoholic Drinks Control Act was substantially weakened in 2013 with the introduction of “devolved government”. This system of ‘home rule’ means that each county government must ratify the act – an uphill battle because some county leaders are also the owners of bars.

According to Kamau, those who brew illicit alcohol also spend as little as possible “in time and money but produce as much alcohol as they can”, while chemicals used in the mortuary speed up the production process, “so we are able to produce a lot of alcohol in a very short time.”

Kamau adds that illicit brews from dens in the slums are bottled, labelled and sold in pubs across the country. A series of police raids in these dens have found women’s underwear and dead rats in the brew.

The Alcoholic Drinks Control Act of 2010 restricts the sale of alcohol to between 5 pm and 11 pm, but drinkers are finding their way around the curfew.

Data collected by Euromonitor International, a market research firm, revealed that alcohol bought in shops or off trade beer sale during the curfew in December 2012 rose by 4.35 percent to 26.4 million litres.

“They [patrons] lock themselves up in pubs and drink during curfews or they buy the alcohol and drink in their homes exposing their children to alcohol from a very young age,” says Dave Kinyanjui, a bar owner in Nairobi’s downtown area.

The Alcoholic Drinks Control Act was substantially weakened in 2013 with the introduction of “devolved government”. This system of ‘home rule’ means that each county government must ratify the act – an uphill battle because some county leaders are also the owners of bars.

According to EABL, the highest growth in sales – at 67 percent – was in spirits, mainly targeting the lower income earners, who are also the target for the many brands from informal sources.

Another report released by Euromonitor International confirmed the steady growth in alcohol consumption, which could rise as the economy improves further, saying that “the alcoholic drinks market is set to expand over the forecast period as the economy is expected to grow tremendously during this time due to bright prospects of oil in Kenya and political stability.”

With the availability of non-returnable bottles and cans, it has never been easier to carry alcohol to the house.

A 2012 national survey by NACADA showed that alcohol is now the most abused substance in the country and of the different types of alcoholic drink, traditional liquor is the most easily accessible, followed by wines and spirits and last but not least Chang’aa (which literally means ‘kill me quick’).

According to an “Alcohol Situation Analysis” for 2012 by the regional office of IOGT-NTO, a global temperance movement: “out of the number of people interviewed, 63 percent had used alcohol and 30 percent had more than five alcoholic beverages per sitting, which is heavy episodic use. Teenagers between 14-17 years of age are having two alcoholic beverages per sitting.”

Government statistics also show that alcohol and drug abuse is highest among young adults aged 15 to 29 years and lowest among adults of 65 years and older.

Under-age and rural children have not been spared. According to NACADA, rural children are more likely to have consumed traditional liquor and Chang’aa than urban children.

David Ogot, national coordinator of Alcohol Awareness in Kenya and a recovered alcoholic, told IPS that “excessive drinking is often viewed as a passing problem until it really gets out of hand, at which point most families hide the issue due to shame.”

He said that there is now a great need to address “alcoholism and to stop justifying the behaviour of an alcoholic.”

Alcoholics wanting to end their addictions have little recourse, according to Dr William Sinkele, Executive Director of Support for Addictions Prevention and Treatment in Africa (SAPTA). While Kenya has over 70 in-patient treatment centres, only three are government-run, he told IPS – Mathare Hospital (with an addiction unit), Coast General Hospital and Portreitz Hospital. The rest are privately owned.

“While is it is good that we have this many treatment centres, most are concentrated around the Nairobi area.  We do not have many centres outside Nairobi.  The average Kenyan with an alcohol or drug problem cannot afford treatment,” he said.

Meanwhile, many of those fighting alcohol abuse in Kenya point an accusing finger at the global alcohol industry which has a big foothold in Kenya and has undermined proper implementation of the Alcoholic Drinks Control Act with aggressive advertising and promotion through musical and artsy events.

A press release from financial advisors KPMG, titled “Incredible Growth of Kenya’s Beer Market“ noted: “Driven by strong population growth, a growing middle class and a dynamic private sector, the beer industry in Kenya has taken off in impressive ways, and is promising of even further developments in the coming decade.” Only inflation and tax increases could diminish this rise, it said.

“To expand its customer base, “the company has accordingly invested in marketing and sales capabilities in this area.”

Meanwhile, in a blog on the IOGT International temperance website,  Brenda Mkwesha wrote: “The odds seem to be against us, but we have heart-driven teams who aren’t willing to stand by while we flush our lives down the toilet. Here’s to a Life Set Free!”