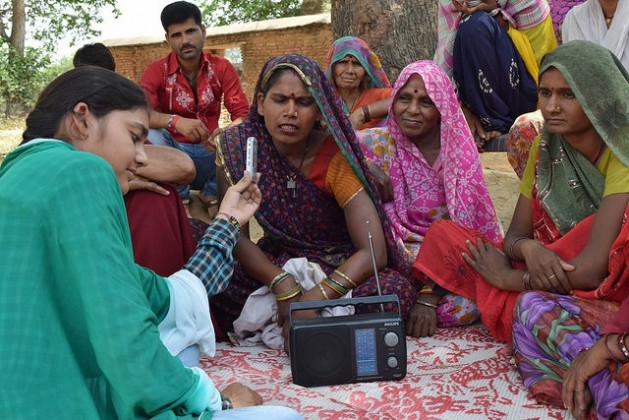 Radio Bundelkhand, based in central India, has about 250,000 listeners, of whom 99 percent are farmers. Credit: Stella Paul/IPS

TIKAMGARH, India, Jun 19 2015 (IPS) - Eighty-year-old Chenabai Kushwaha sits on a charpoy under a neem tree in the village of Chitawar, located in the Tikamgarh district in the central Indian state of Madhya Pradesh, staring intently at a dictaphone.

“Please sing a song for us,” urges the woman holding the voice recorder. Kushwaha obliges with a melancholy tune about an eight-year-old girl begging her father not to give her away in marriage.

“The radio station is by, of and for the people of this region." -- Naheda Yusuf, head of Radio Bundelkhand
The melody melts into the summer air, and the motley crowd that has gathered around the tree falls silent.

“Thanks for so much for singing to ‘Radio Bundelkhand’,” says Ekta Kari, a reporter-producer at the community radio station based in this predominantly farming district, before switching off the device.

With a listenership of some 250,000 people spread across over a dozen villages in Bundelkhand, an agricultural region split between the states of Madhya Pradesh and Uttar Pradesh, the station is lifting up some of India’s most beaten down communities by getting their voices out on the airwaves and bearing good tidings in a place long accustomed to nothing but bad news.

Some 18.3 million people occupy this vast region. The majority of them are farmers, and the list of hardships they face on a daily basis is endless.

According to the Planning Commission of India, a loss of soil fertility caused by erratic weather, coupled with severe depletion of the groundwater table, has made life extremely hard for those who work the land.

Crop losses due to unseasonal rains and recurring heat waves have also become common over the last decade. Last year, a majority of farmers lost over half of their winter crop due to unexpected heavy rains.

Two out of every three farmers interviewed by IPS concurred that extreme weather has made farming, already a backbreaking occupation, something of a nightmare in these parts.

Recurring droughts between 2003 and 2010 forced many people to abandon traditional mixed cropping of millets and pulses and switch to mono-cultures like wheat, which require heavy inputs.

NGOs have also pointed to unequal land distribution policies in the region as a major cause of farmers’ strife, with millions of families unable to practice anything beyond very small-scale, subsistence agriculture given the paltry size of their plots.

Earlier this year, plagued by poor weather, miserable harvests and alleged apathy to their plight by both state and federal government bodies, scores of starving and debt-ridden farmers threw in the towel.

In the first two weeks of March, roughly a dozen farmers in Bundelkhand had committed suicide.

This follows a pattern in the region that speaks to the desperation these rural communities face – according to India’s National Crime Records Bureau (NCRB), 3,000 farmers in Bundelkhand committed suicide between 1995 and 2012.

While this represents only a fraction of all suicides across the country’s agricultural belt, which is now approaching 300,000, Bundelkhand’s death toll is no trifling number.

Given this harsh reality, an outsider might find it hard to fathom how an intervention as simple as a community radio station could make a difference. But for the listeners who toil here daily, the radio has become something of a lifeline.

“Our station, our issues”

Naheda Yusuf, a senior programme manager at the Delhi-based media non-profit Development Alternatives, which helped launch Radio Bundelkhand back in 2008, tells IPS that 99 percent of the listeners are farmers.

Although the villages that make up the bulk of the audience lie in different states, they all fall into the larger Bundelkhand region and so share a distinct culture, traditions and dialect.

“The radio station is by, of and for the people of this region,” Yusuf explains. “It connects with them in their Bundeli dialect, and provides information on issues that concern them.”

While some of the information is sourced daily from government agencies like the departments of agriculture and meteorology, most of it comes from six reporter-producers who interact directly with the community to gather news and views most relevant to their listeners.

Every day, each of them produces at least one live show, during which the audience is asked to call in with their questions and comments.

“It’s your show,” one commentator announces on the air, “so if you don’t share your opinions, we can’t get it right.”

One of the most popular shows on Radio Bundelkhand is ‘Shuv Kal’ meaning good tomorrow. Its central theme is climate change and its effect on the farming community.

One of the show’s two producers, Gauri Sharma, says they discuss water access, deforestation and solar energy. They also pay homage to the river Betwa, a tributary of the Yamuna that waters these lands, and encourages farmers not to waste the precious resource.

“We discuss planting trees around the farms, so excess water from irrigation pumps can be utilised,” Sharma tells IPS. “We also spread awareness about renewable energy.”

The response from the audience has been encouraging, she adds, especially among the youth who call and write in to share how the station has shaped their practices.

In one such letter, an 18-year-old farmer from the village of Tafarian shared that he had “planted 22 fruit trees around his farm, stopped using polythene and begun vermicomposting” as a result of listening to the show.

Another listener, Jayanti Bai of Vaswan village, says the radio station literally saved her entire crop. “The leaves of my okra plants were turning yellow,” she tells IPS. “Then I heard of a medicine on the radio, which I sprayed on the leaves – it saved me.”

She now wants to buy a radio for the entire community and tie it to a tree so the women in her neighbourhood can listen to it together. It will take some saving – the most popular device used here costs about 1,000 rupees (about 15 dollars) and that is more than she can afford in one go.

Farmers also tell IPS a radio’s portability makes it a more attractive choice since it can be taken to “work” – meaning carried into the fields and played loud enough for workers to hear as they go about their tasks.

Because the station caters to a largely female audience, it tackles issues that are particularly relevant to women listeners. One of these is the question of suicide, which many women see as a male phenomenon.

“Have you ever heard of a woman farmer committing suicide?” asks 46-year-old Ramkumari Napet, of Baswan village. “It is because she thinks, ‘What will happen to my children when I am gone?’”

Women contend that men require more help in understanding their relationships both to themselves and their families. And indeed, the radio station is helping them determine these blurry lines.

“Last week an anonymous caller said his brother was thinking of committing suicide,” Sharma tells IPS. “He [the caller] said he was going to try to talk his brother out of it.”