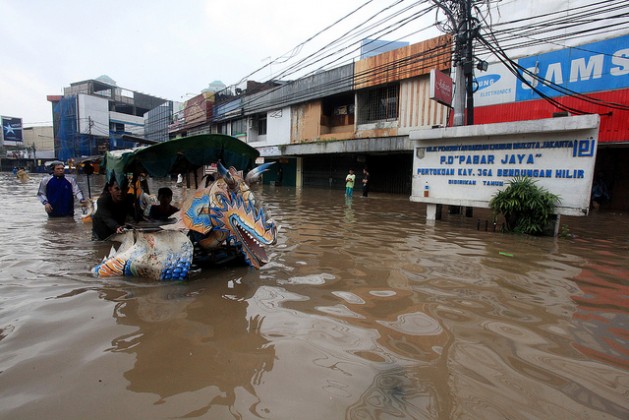 UNITED NATIONS, Jun 18 2015 (IPS) - Natural disasters have become a fact of life for millions around the world, and the future forecast is only getting worse.

From super typhoons to floods, droughts and landslides, these events tend to widen existing inequalities between and within nations, often leaving the poorest with quite literally nothing.

"The biggest mistake is that we wait for something to happen before responding to it." -- Chloe Demrovsky

In 2013 alone, three times as many people lost their homes to natural disasters than to war, according to a new policy brief by the University of Cambridge Institute for Sustainability Leadership.

The brief, which recommends incorporating accessible risk insurance into the Sustainable Development Goals (SDGs), frames all this as a human rights issue.

“States and other actors have a duty to protect the human rights of life, livelihood and shelter of their citizens, which can be threatened by natural hazards if exposure is high and resilience low or inadequate,” the brief’s author,  Dr. Ana Gonzalez Pelaez, a fellow at the institute, told IPS.

“Insurance is an essential element in building resilience, and for insurance to operate appropriate supportive regulation needs to be in place.”

She said that at least some of these resources could be allocated as part of the adaptation measures countries will negotiate at the climate talks in Paris in December.

Earlier this month, the G7 promised to insure up to 400 million vulnerable people against risks from climate change. This could be accomplished through a combination of public, private, mutual or cooperative insurance systems.

Tom Herbstein is the programme manager of ClimateWise, whose membership includes 32 leading insurance companies. He says many are actively exploring ways to extend coverage to emerging markets and vulnerable communities.

“Yet entering such markets poses many challenges,” Herbstein told IPS. “These include distribution models unsuited to high-volume, low premium insurance products; a lack of historical actuarial data; populations struggling to comprehend a financial product one might never derive benefit from; and widespread political and regulatory uncertainties.”

Ultimately, he said, if coverage of poor communities is to be mainstreamed, “an alignment between insurers, political leaders, regulators and other stakeholders will be necessary to help lessen the risks – i.e. costs – associated with entering such new and challenging markets.”

Palaez says that microinsurance is also moving further into the mainstream strategy of major commercial insurers like Alliance and Swiss Re. In January 2015, a consortium of eight global insurance institutions announced the creation of Blue Marble Microinsurance, an entity formed to open markets and deliver risk protection in underserved developing countries.

There have already been success stories. In the aftermath of Typhoon Haiyan in October 2013, CARD MBA of the Philippines paid claims to almost 300,000 customers affected by the catastrophe within five days of the event.

But some disaster experts also emphasise that an ounce of prevention is worth a pound of cure. And even the best intentions can have lacklustre results.

Haiti is a prime example. More than five years ago, a massive earthquake struck the Caribbean nation, already the poorest in the region, killing more than 230,000 people.

A year later, the Red Cross initiated a multimillion-dollar project called LAMIKA to rebuild damaged or destroyed homes, and amassed nearly half a billion dollars in donations. But according to a recent investigation by ProPublica, only six homes were actually built.

Chloe Demrovsky, executive director of the non-profit Disaster Recovery Institute (DRI), says aiding local communities in the immediate aftermath of a disaster will never be a simple task.

“The biggest mistake is that we wait for something to happen before responding to it,” she told IPS. “Many disasters could be prevented by focusing on preparing our communities in advance. Each disaster event presents unique challenges, so there is no option to apply a one-size-fits-all approach.

“For this reason, the idea of promoting resilience is gaining ground over the traditional approach of disaster risk reduction. Resilience means the ability to bounce back from a shock. The resilience of a community in terms of disaster recovery is dependent on the resources, level of preparedness, and organizational capacity of that community.  Strong communities recover faster.”

She said that the concept of “business continuity” is a key component of building resilient systems.

“Vulnerable communities are always the hardest hit during a large-scale disaster and it is important that the government deploys enough resources quickly enough to help them recover. If the private sector is adequately prepared, that will reduce the government burden and allow them to focus resources on the most adversely affected communities.

“The private sector needs to be included in every stage of the process in order for it to be an asset rather than a potential detractor from the major goals of improving our approach to disaster aid.”

“The local NGO is used to working in that community, understands its unique system, and will be able to more rapidly identify its needs.  Because they are local, they will also remain in the area for the long-term even after the original outpouring of aid begins to dry up,” she pointed out.

“Finally, we need to learn from past experiences and start to prepare for the next disaster before it happens. Many tragedies can be prevented by having a good plan in place. Events happen, but disasters are man-made.”