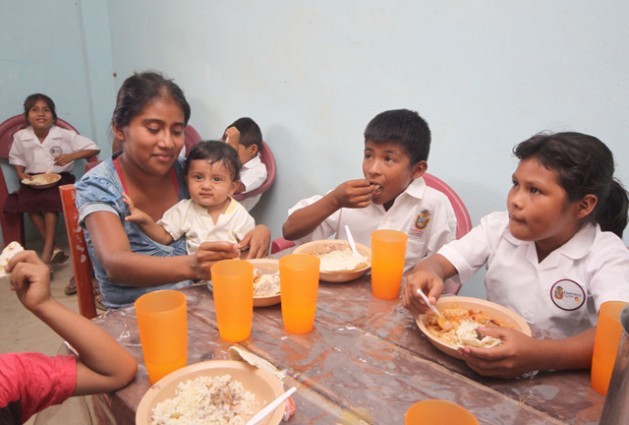 A mother eats lunch with her children in a rural Mexican school, as part of one of the programmes that fall under the umbrella of the Crusade Against Hunger. Credit: Government o Mexico

MEXICO CITY, Aug 5 2015 (IPS) - While most of Latin America has been reducing poverty, Mexico is moving in the other direction: new official figures reflect an increase in the number of poor in the last two years, despite the billions of dollars channeled into a broad range of programmes aimed at combating the problem.

The negative impact of the 2014 fiscal reform, poorly-designed and mismanaged public policies, sluggish economic growth, and family incomes that have been frozen are all factors underlying the rise in the number of people living in poverty in the region’s second-most populous country, according to experts consulted by IPS.

“We have some well-designed social programmes, but many others have got off track,” said Edna Jaime, the head of México Evalúa, a think tank on public policies. “They claim to fight poverty and foment employment, but they have no effect. Many are captive; they serve political clientele instead of the public,” she told IPS.

“If productivity and wages don’t go up, poverty won’t be reduced via the route of incomes. The provision of social services like healthcare, education and housing must be guaranteed, as well as more rational and better designed budgets for anti-poverty programmes and policies.” – Edna Jaime

The criticism is focused on initiatives like the Programme of Direct Support for the Countryside (PROCAMPO), which will shell out some four billion dollars in subsidies this year – money that will mainly benefit big agroexporters in northern Mexico, even though the programme was initially aimed at helping small-scale farmers weather the impact of the North American Free Trade Agreement (NAFTA) in effect between Canada, Mexico and the United States since 1994.

Other targets of the criticism are the over 15 billion dollars a year in subsidies for gas and electricity, because they benefit the bigger consumers.

A similar amount goes towards financing Prospera, a programme to foment social inclusion – formerly known as Oportunidades and praised by international development agencies – and Seguro Popular.

According to the latest survey by the National Council for the Evaluation of Social Development Policy (CONEVAL), published Jul. 23, 55.3 million people live in poverty in Mexico – three million more than in 2012 – equivalent to 46.2 percent of the population of 121 million.

Mexico runs counter to the general trend as one of the few countries in the region that have not been successful in reducing poverty, along with Guatemala and El Salvador, according to the United Nations Development Programme (UNDP) Human Development Report 2014.

“Mexico is one of the few countries which, instead of reducing poverty, saw the progress made in the past decade grind to a halt. The elements that have hindered progress are the not so high economic growth, and the fact that spending does not have a redistributive effect,” the coordinator of the UNDP report in Mexico, Rodolfo de la Torre, told IPS. 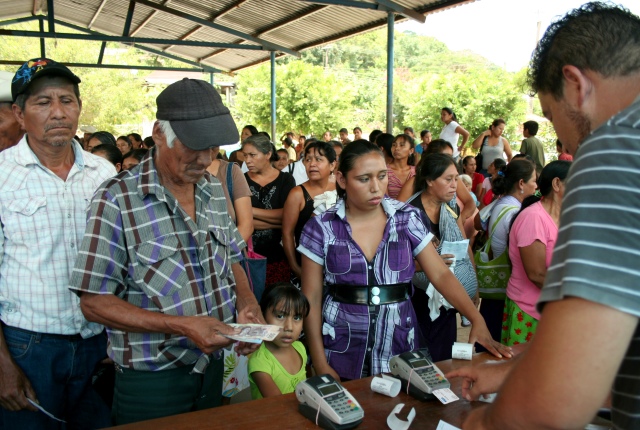 Beneficiaries of one of the subsidies for farmers receive the assistance in a rural town in Mexico, as part of the Prospera social programme aimed at reducing poverty. But despite the billions invested in the war on poverty, the problem has grown in this country in the last two years. Credit: Government of Mexico

The expert said the momentum behind some of the anti-poverty programmes has let up, “which means they have started to lose their effect on reducing poverty.”

The poverty measurement takes into account a number of factors: coverage of basic services like education, healthcare, social security, housing and food, and family income.

On Jul. 29, the Economic Commission for Latin America and the Caribbean (ECLAC) downgraded its forecast for GDP growth in Mexico this year from 3.0 to 2.4 percent – too low to generate the one million new jobs needed.

With respect to income, the current minimum wage of roughly five dollars a day is one of the lowest in Latin America, according to the Observatory of Wages at the private Ibero-American University in Puebla, in the central Mexican city of that name.

The rise in poverty highlights not only the shortcomings of Prospera, but also of the National Crusade Against Hunger, conservative President Enrique Peña Nieto`s flagship programme, which targets people living in extreme poverty and suffering from malnutrition.

The aim of the Crusade, which is concentrated in 400 municipalities and involves 70 federal programmes, is to reach 7.4 million people, 3.7 million of whom live in urban areas and the rest in the countryside.

But Jaime said implementing the strategy “is a very complex task” because of its design and multisectoral structure, and the risk of falling into clientelism. “There are instruments for assisting the poor that have proven themselves to be more effective. The Crusade has not had the desired success,” she said.

Jaime’s think tank México Evalúa, which forms part of the Citizen Action Against Poverty network, has publicly expressed its concern about the initiative ever since it was launched in January 2013, a month after Peña Nieto was sworn in.

For De la Torre, it hasn’t been an outright failure. But, he added, “this is a wakeup call to revise how it functions.”

“The entire burden of poverty reduction cannot fall on one programme,” the UNDP expert said. “Health and education policies also have a role to play. If new resources are not invested, the strategy is not going to bring about a shift in the focus on poverty reduction.”

As of early August, the government had not yet announced the Crusade’s specific targets for this year.

Meanwhile, CONEVAL is to present its medium-term assessment of the strategy in December.

With a grim economic outlook, and the government holding tight to its austerity policies, the experts suggest redesigning the structure of the budget and reviewing the management of social programmes.

“If productivity and wages don’t go up, poverty won’t be reduced via the route of incomes,” said Jaime. “The provision of social services like healthcare, education and housing must be guaranteed, as well as more rational and better designed budgets for anti-poverty programmes and policies.”

In the view of the UNDP, Mexico cannot wait for economic recovery to fight poverty.

“The way spending is channeled towards the neediest must be modified. The funds don’t reach the poorest of the poor; the programmes are not sensitive to regional deficiencies or deficiencies affecting particular groups or individuals,” De la Torre complained.

The UNDP is preparing studies on public spending on children, to identify in which stages of life there are budget gaps, and on the evolution of human development and the labour market’s contribution to that development.