Inequality in Mexico Is All About Wages 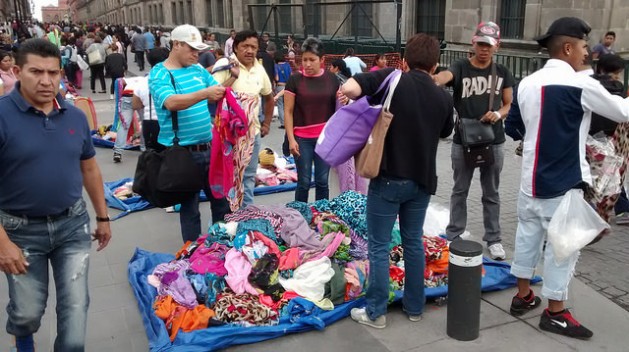 Street vendors on Moneda street in the historic centre of Mexico City. The huge informal economy is one expression of the enormous pay inequality in the country. Credit: Emilio Godoy/IPS

MEXICO CITY, Nov 20 2014 (IPS) - Sandra G. works Monday through Saturday in a beauty salon on the south side of Mexico City, where she earns slightly more than the minimum wage, which in this country is just five dollars a day.

The 30-year-old, who studied cosmetology and asked that her last name not be published, does beauty treatments and sells products like skin cream and lotions, which boost her income thanks to small commissions on her monthly sales.

But the pressure to reach the minimum sales target of 3,000 dollars a month makes the work “quite stressful,” she said.

“The owner told me that since she was just starting up her business she could only pay minimum wage, but that if I was good with sales, I could increase my income,” she told IPS.

Sandra said she and her husband, an engineer, get by but without anything left over for luxuries.

“There has been no in-depth effort to tackle the causes of the poverty that comes from the poor distribution of income, and the concentration of wealth and of capital in general. The approach is to attack the final effects, one of which is wages.” -- Alicia Puyana

“My husband was unemployed for a couple of months and things were really tight,” she said. “He found work and that gave us some breathing room, but we’re worried that the possibility of prospering is far off because wages are too low compared to the cost of living.”

Stories like Sandra’s are typical and illustrative of the inequality that reigns in this country of 118 million people. But the current debate over a rise in the minimum wage seems to ignore the reality of millions.

“The issue of wages is a question of inequality,” said Miguel López, a member of the Observatory of Wages at the private Iberoamerican University of Puebla, a city in central Mexico. “Wages can be a mechanism to mitigate inequality. But there are more workers and they get a smaller piece of the pie. It’s a problem of redistribution.”

The current minimum wage of around five dollars a day is the lowest in Latin America, followed by Nicaragua, Haiti and Bolivia, according to the Observatory.

But the most worrisome aspect is the enormous wage gap, as reflected by a 2013 study by the global management consultancy, Hay Group, on the difference between the pay earned by senior employees and new workers.

According to the report, the base salary of an executive in Mexico City is 10,000 dollars a month, just 417 dollars less than what an executive in a similar company in New York earns. But in the United States, the federal minimum wage is 7.25 dollars an hour, compared to 5.05 dollars a day in the Mexican capital.

The Presidents’ Compensation Study by the international human resources consultancy Mercer found that in Mexico the CEO of a large company earned 121 times the minimum wage – the biggest gap in Latin America.
Article 123 of the Mexican constitution states that “the minimum wage in general should be sufficient to meet the normal needs of the head of the family, in material, social and cultural terms, and to provide obligatory education for the children.”

According to official figures, Mexico’s economically active population totals 52 million, of whom more than 29 million work in the informal sector. The official unemployment rate stands at 4.8 percent and underemployment at seven percent.

“Factory of the poor”

A study by the Multidisciplinary Research Centre (CAM) of the National Autonomous University of Mexico found that 4.4 million workers in Mexico earn from one to three times the minimum wage.

The report, “Factory of the Poor”, published in May, adds that just over two million workers earn from three to five times the minimum wage.

Ernesto C. earns nearly 5,000 dollars a month, plus a productivity bonus, at one of the largest private banks in Mexico.

“The pay is good, it’s at the same level as other banks in the country and is similar to what is earned by colleagues from the United States who I deal with,” said the 34-year-old executive, who lives with his girlfriend in an upscale neighbourhood on the west side of the city.

Ernesto, who also asked that his last name not be used, and who drives the latest model SUV and spends nearly 300 dollars on an evening out, said he obtained financing to study abroad.

“When I came back, it wasn’t like I had expected – it was actually hard for me to find a good job. But I finally found one and I managed to climb up the ladder quickly,” he said.

The Federal District sets an example

On Sept. 25, Miguel Mancera, Mexico City’s left-wing mayor, presented a proposal to raise the minimum wage for city employees to six dollars a day as of June 2015, with the aim of extending the measure to the private sector.

The study “Policy for restoring the minimum wage in Mexico and the Federal District; Proposal for an accord”, drawn up by a group of experts, which forms the basis of Mancera’s offer, reported that the real value of wages has gone down 71 percent at a national level.

That reduction, the document says, pulls down other remunerations, just as “the minimum wage affects the entire income structure.”

Alicia Puyana, a researcher at the Latin American Faculty of Social Sciences in Mexico, says the fight against poverty has been given higher priority than efforts to reduce inequality.

“There has been no in-depth effort to tackle the causes of the poverty that comes from the poor distribution of income, and the concentration of wealth and of capital in general. The approach is to attack the final effects, one of which is wages,” she said.

In Mexico, 53 million people are poor, according to the National Council for the Evaluation of Social Development Policies.

By contrast, the number of billionaires, and their fortunes, grew between 2013 and this year, says the report “Billionaire Census 2014”, produced by the Swiss bank UBS and the Singapore Wealth-X consultancy.

The number of billionaires in Mexico grew from 22 to 27 and their combined income increased from 137 billion to 169 billion dollars.

“We need a social pact and a real policy on wages. What better social policy could there be than one that directly tackles the distribution of income?” López said.

The Multidisciplinary Research Centre says the minimum wage needed to cover a basic diet would be 14 dollars a day, while the Mexico City Federal District government sets it at 13 dollars a day.

“Raising the minimum wage 15 or 20 percent is just a crumb. It doesn’t compensate the general decline, which could be remedied with a progressive fiscal policy, to capture part of the major income flows,” Puyana said.