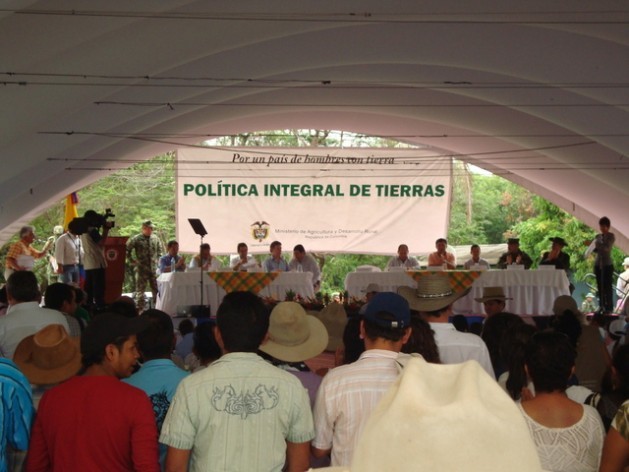 A meeting to discuss the restoration of land in Colombia to rural victims of the half-century armed conflict – a situation that the voluntary guidelines on land tenure can help solve. Credit: Helda Martínez/IPS

SANTIAGO, Apr 6 2016 (IPS) - Voluntary guidelines on land tenure adopted by the international community to combat the growing concentration of land ownership and improve secure access to land have begun to make headway in Latin America, a region that is a leader in the fight against hunger and that is taking firm steps towards achieving food security.

“The guidelines are an absolutely political document, which helps even out the playing field,” promoting dialogue and negotiation, said Sergio Gómez, a consultant with the United Nations Food and Agriculture Organisation (FAO) regional office, in the Chilean capital.

“The dynamics of the land market and the concentration of land ownership and land-grabbing by foreign interests had gotten out of control, and the FAO addressed this because if these things are not kept within reasonable limits, food security is jeopardised,” he told IPS.

The Voluntary Guidelines on the Responsible Governance of Tenure of Land, Fisheries and Forests in the Context of National Food Security can only be understood in relation to the existing levels of land concentration and land-grabbing, he said.

“The land tenure situation today is unprecedented, because it is happening at a very particular moment, when the food crisis that applies heavy pressure to natural resources is compounded by an energy crisis and a financial crisis.” -- Sergio Gómez

According to a FAO studied carried out in 17 countries in this region, land-grabbing has increased significantly since the turn of the century.

In this region, the concentration of land ownership and land-grabbing are at their strongest in Argentina and Brazil, followed by the Dominican Republic, Mexico, Chile, Colombia, Nicaragua and Uruguay.

These problems are at a mid- to high level of intensity in Bolivia, Ecuador, Paraguay and Peru, while they are less present in the countries of Central America and the English-speaking Caribbean.

“The land tenure situation today is unprecedented, because it is happening at a very particular moment, when the food crisis that applies heavy pressure to natural resources is compounded by an energy crisis and a financial crisis,” Gómez said.

“All of this leads to unprecedented pressure with regard to the land question,” he said.

The Guidelines, approved in 2012 by the Committee on World Food Security (CFS) – described as the foremost inclusive international and intergovernmental platform for all stakeholders to work together to ensure food security and nutrition for all – are aimed at serving as a reference point for and providing orientation to improve the governance of land tenure, fisheries and forests.

“The Guidelines are a negotiating tool in an area where there are no clear formulas, but where, in a wide range of situations, the affected groups have to sit down and dialogue, to seek agreements,” Gómez said.

The document establishes 10 rules that the different actors must accept before engaging in dialogue. They are called implementation principles, and are obligatory and designed to provide orientation for this kind of discussion.

They range from respect for human dignity and existing laws to gender equality and transparency.

All of the countries of Latin America and the Caribbean have signed the accord, and although it is not binding, “it is understood that there is a willingness to comply,” Gómez said.

But the guidelines are just now starting to be applied in the region.

In Guatemala, the initiative emerged from a request from the government, which in 2013 asked the FAO to provide support and technical assistance to strengthen the country’s agricultural institutions.

“What we did in Guatemala is the most significant thing we have done in the region,” said Gómez.

The land issue, fraught with conflict and inequality, is a major problem in that Central American country of 15.8 million people, where nearly 54 percent of the population lives below the poverty line and 42 percent are indigenous.

In rural areas in Guatemala, the poverty rate climbs to 75 percent, and six out of 10 people living in poverty are considered extremely poor. 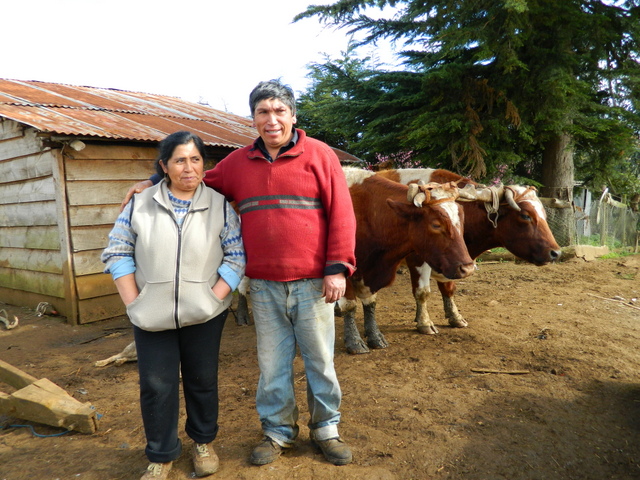 This Mapuche couple, Luis Aillapán and his wife Catalina Marileo, were tried and convicted under an anti-terrorism law for protesting the construction of a road across their land, which violated their land rights. Credit: Marianela Jarroud/IPS

In terms of land ownership, two percent of farmers own 57 percent of the land, while 92 percent own just 22 percent.

As a result of the progress made, 80 percent of the aspects tackled in discussions in the country were incorporated in the 2014 national agrarian policy plan.

But the 2015 political crisis brought the process to a halt, although the FAO hopes to get things moving again.

In Colombia, meanwhile, land questions are at the heart of the armed conflict that has shaken the country for over half a century, and resolving this problem is essential to achieving peace, and to ensuring compliance with a preliminary agreement on justice and reparations reached Dec. 15 in the peace talks between the government and the FARC insurgents in Havana.

An estimated 6.6 million hectares – roughly 15 percent of Colombia’s farmland – were stolen or abandoned when the families were forcibly displaced since the early 1990s. Today, 77 percent of the land in the conflict-torn country of 48 million people is in the hands of 13 percent of owners, while just 3.6 percent own a full 30 percent of the land.

“In Colombia, land is a hot issue, and it is key to the peace agreement” expected to arise from the peace talks in the Cuban capital, Gómez said.

He added that the authorities “have passed a few laws to restore land to people who were forced off it, who number in the tens of thousands. But now we’re entering another phase, based on a project for cooperation with the European Union, as part of the peace process.”

On the road to implementation of the Guidelines, the FAO has discussed holding regional workshops and has stressed the need for local involvement.

Nury Martínez, a leader of FENSUAGRO, the largest agricultural workers union in Colombia, which has contributed to the process aimed at implementing the Guidelines, said some of the points included in the Guidelines “are very important to us as peasant farmers…and are tools of struggle.”

But to use a tool it is necessary to be familiar with it. With that aim, the Food Sovereignty Alliance drew up a popular manual on the Guidelines, “aimed at helping people understand them better and enabling peasant farmers and indigenous people to make them their own,” Martínez, who is also a regional leader of the international peasant movement Vía Campesina, told IPS from Bogotá.

In Chile, meanwhile, the FAO has worked in the southern region of La Araucanía, where the Mapuche indigenous people have long been fighting for their right to land.

José Aylwin, co-director of the Citizen Observatory, a Chilean NGO, told IPS that in Chile, “there is no other case, except private conservation projects, of such heavy concentration of land in so few hands.”

He added that the context surrounding the conflict in southern Chile “is that of a people who lived and owned that land and the natural resources, and a state and private interests that came in later and stripped the Mapuche people of a large part of their territory.”

Despite the polarisation of groups in the area, the FAO managed to bring together 67 people, including Mapuche and business community leaders, in May 2015.

Aylwin said these talks demonstrated “the timeliness of the Guidelines” with respect to conflicts generated by the concentration of land in the hands of the forest industry.

“The conflicts in La Araucanía do no one any good; solutions are needed, and the Guidelines provide essential orientation,” he said.

Despite the difficulties, Gómez predicted that the Guidelines would increasingly be applied in the region. “So although we feel distressed that faster progress isn’t being made, we’ll have Guidelines for several decades.”

With additional reporting by Constanza Viera in Bogotá.