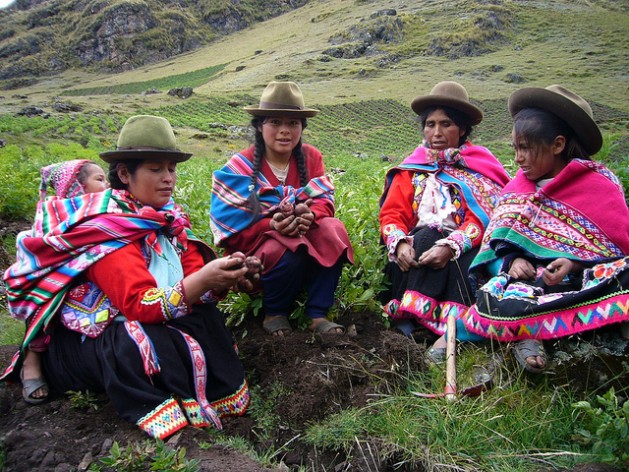 UNITED NATIONS, Jul 18 2016 (IPS) - Fast-tracked development often means that indigenous people and their territories get run over and their rights are not taken into consideration, Roberto Borrero, from the International Indian Treaty Council and Indigenous Peoples Major Group, said here Friday.

The High Level Political Forum currently taking place at the UN includes many discussions on “private partnerships” and “fast-tracking” development in order to “leave no one behind,” worrying indigenous leaders that development will continue to ignore the rights of indigenous peoples, pushing them behind further.

“If priorities have been given to these relationships with businesses, and there are not special measurements to gauge their impacts on indigenous peoples and their violations of human rights, then we will be left behind,” says Roberto Borrero, from the International Indian Treaty Council and Indigenous Peoples Major Group.

Up to 50 percent of global land is customary land of indigenous people, but only 10 percent is legally recognized. Joan Carling, Expert Member of the Permanent Forum on Indigenous Issues and Secretary-General of the Asia Indigenous Peoples Pact (AIPP), says these actions against indigenous land is a key factor why indigenous people are marginalized and remain vulnerable.

“If priorities have been given to these relationships with businesses, and there are not special measurements to gauge their impacts on indigenous peoples and their violations of human rights, then we will be left behind,” -- Roberto Borrero.

“Aside from many large dams and pipelines such as in Asia, Latin America and Africa which are considered to be ‘clean energy’, we also have massive plantations for biofuels such as palm oil and corn, extractive industries and agri-business,” says Carling, “These are being undertaken without meaningful consultations and the free prior and informed consent of indigenous peoples. Thus, these development projects are clear cases of land grabbing.”

“We should not just reach out to those left behind, but we need to reach out to the 1 percent who are actually in control of the global wealth, and make sure that the structures that perpetrate inequality are also addressed by clear actions, especially by states and development actors,” said Carling.

Dams are one example of how different groups define development differently. While some UN member states may define mega hydro projects as development, or even sustainable development, Indigenous groups say that when the harm caused by these dams is taken into account it is difficult to define them as development.

The case of award-winning indigenous activist, Berta Caceres, who was murdered for opposing the construction of a hydroelectric dam in Honduras, shows that indigenous people have a different interpretation of what sustainable development is, says Carling.

The dam, which can consume as much water in a few hours as a rural Honduran family would consume in a year, was part of a larger economic development plan for Honduras that promoted foreign investment and large-scale resource extraction at the expense of hundreds of indigenous and peasant rural communities.

These interests included the Honduran government and its powerful supporters, as well as U.S., Canadian, Chinese and other foreign interests. The four men charged for Caceres’ murder were active or retired military officers, the hydro company’s personnel, and one was an engineer for the dam.

“When indigenous peoples try to defend their lands and resources like Bertha, they are being  intimidated, arrested, criminalised  or killed,” said Carling.

“Further, there are many unreported cases of such killings and other forms of human rights violations.”

“We can be sure that there will be thousands of Berta Caceres in the world if indigenous people’s voices are not taken into consideration for the Sustainable Development Goals,” said Carling.

“We need to address the root causes of why certain groups are left behind, which are clearly the violation of our human rights. It is clearly our invisibility, that we are seen as a burden, not as an asset,” said Carling.

Borrero said that although the SDGs are considered an improvement to the Millennium Development Goals, in which indigenous peoples were completely invisible, the new goals still fail to address many issues of main concern to indigenous communities. These include references to collective rights, self-determination, holistic development approaches, and the right to free, prior informed consent, cultural sensitivity, and a human rights based focus.