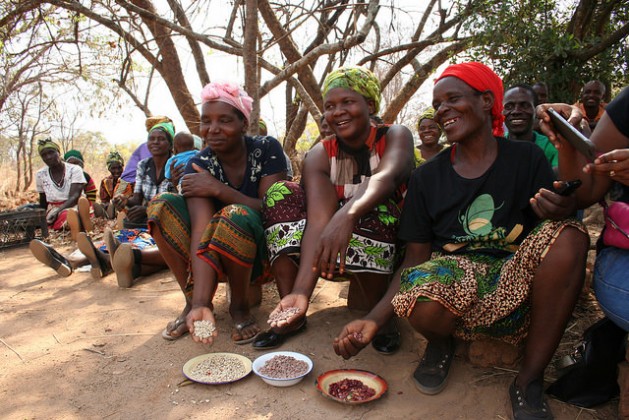 MASVINGO, Zimbabwe, Oct 12 2016 (IPS) - Elizabeth Mpofu is a fighter. She is one of a select group of farmers who equate food security with the war against hunger and shun poor agricultural practices which destroy the environment and impoverish farmers, especially women.

“Pulses are the perfect food for Africa but their production is challenged by imperfect policies.” -- Charles Govati

Despite a region-wide drought in Southern Africa, she harvested 150 kg of dried beans this year. Although the number was still far less than what she harvests in a good season, dried peas and beans have armed farmers like Mpofu to battle food and nutritional insecurity at the household level.

The dried beans and peas belong to a class of food legumes known as pulses, widely considered a revolutionary food because of their many benefits. Pulses are rich in protein, drought resistant, offer an alternative cash crop and provide a fuel source. They are a perfect food in Africa, challenged by high rates of malnutrition and micronutrient deficiencies, particularly among children under five years old.

The World Food Programme says the African region has the highest percentage of hungry population in the world, with one person in four undernourished, while over a third of children in Africa are stunted.

Celebrating the Year of Pulses

Legumes used as vegetables such as green peas and beans or those used for oil extraction such as soybean and groundnuts are not classified as pulses.

“Pulses are the key to food security and nutrition in Africa, taking into consideration the climate crisis being faced on the continent,” Mpofu told IPS. “Pulses are providing a diversity of food for my family and also are important in improving soil health, especially in promoting an agroecology farming system.” 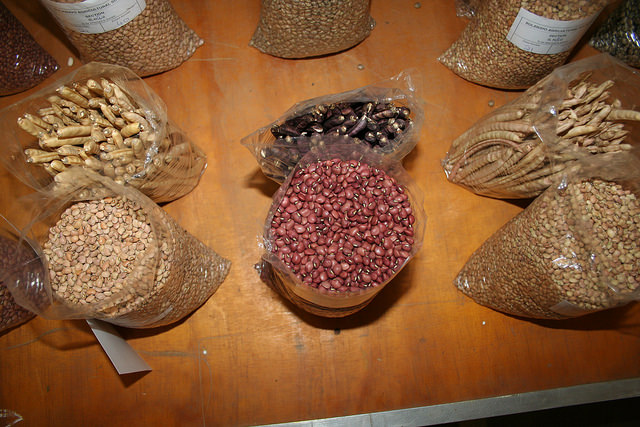 Pulses on display at a farmer’s market in Bulawayo, Zimbabwe. Pulses are power crops, offering nutritional and income security for farmers in Africa. Credit: Busani Bafana/IPS

Mpofu, a member of the International Coordination Committee (ICC) and the General Coordinator of La Via Campesina, an international peasants’ movement with a membership over 200 million farmers, is one of six special Ambassadors for the Africa region nominated by the FAO raise public awareness about the contribution of pulses to food security, and the positive impacts they can have on climate change, human health and soil biology.

“Without these pulses a woman cannot call herself a mother of a family because you do not have a complete dish to feed your family,” said Mpofu, a mother of three. “There is need to create awareness of the importance of pulses to build a strong united voice which will enable women to lobby for policies that promote peasant agroecology and food sovereignty.”

Noting that farmers are challenged by lack of information, Mpofu says most have to make do with poor inputs, for example, growing commercial hybrid seeds rather than native varieties that have proven to be resilient for generations.

“The principles of keeping and producing native seeds is our way of advocating for food sovereignty through the promotion of our indigenous seeds and agroecology farming methods, and these principles can work in promoting the growing and consumption of pulses especially in Africa where we face challenges of food insecurity,” said Mpofu.

Recognising the importance of pulses to global food and nutritional security and environmental sustainability, the 68th United Nations General Assembly voted in 2013 to declare 2016 as the International Year of Pulses (IYOP).

FAO Director-General José Graziano da Silva said at the 2015 launch of IYOP that pulses are important for the food security of millions, particularly in Latin America, Africa and Asia, where they are part of traditional diets and often grown by small farmers.

In Malawi, farmers like Janet Mingo do not go hungry even when her maize crop fails — which it has done often owing to drought. The reason: protein rich pigeon peas (Cajanus Cajan) Mingo intercrops with maize on her quarter of a hectare plot in Chikalogwe village in the southern Balaka District, one of the driest regions of the country.

Pigeon peas are a nutritious legume which also improve crop yields by fixing nitrogen into the soil. More strategically for Mingo, pigeon peas are a key cash crop. Each season, Mingo harvests up to 1500 kg of pigeon pea from her plot, earning enough money to buy maize and cover other household needs.

“I now sell my maize crop and pigeon peas through the Agriculture Commodity Exchange,” said Mingo, who was introduced to pigeon pea by her local extension officer. “Life is hard but I do not feel the pinch.”

Mphatso Gama, the principal agricultural officer for Machinga Agriculture Development Division in Southern Malawi and a member of the National CA Taskforce, told IPS that farmers who used to rely entirely on maize have diversified into pigeon pea as a second crop. As a result, both their food security and income has improved.

“The drought-resilient pigeon has been a lifesaver,” Mphatso said. “While intercropping the nitrogen-fixing legume with maize has boosted yields, importantly pigeon peas have become a viable cash crop for farmers in Malawi, where it has a ready market and is a good source of protein for families.”

Tapping the trade power of pulses

Gavin Gibson, former executive director of the Global Pulse Confederation, told IPS that pulses are part of the traditional diets of the greater part of the world’s poorest population.

Gibson said of the 60 to 65 million tonnes of pulses produced annually, until very recently only around 7 to 10 million tonnes were traded between countries.  The rest were consumed domestically in countries where pulses are traditionally grown.

India, where pulses have been consumed for thousands of years as a staple food, is the biggest producer and consumer of pulses.  Africa is still finding its feet in ramping up its production of pulses, but is making progress.

“We think that this is likely to change quite quickly for a number of reasons, not least of which is the rapid emergence of new origins in Northern Europe and Africa,” Gibson said.

“We strongly believe — and will be forcefully promoting and driving — the view that increased demand from new market sectors that will rapidly emerge from the work of this group will of necessity force measures to be taken by governments and local communities alike to overcome present logistical and educational barriers in developing countries.”

The International Institute of Tropical Agriculture (IITA), which has developed more than 80 percent of cowpea varieties released to farmers in Nigeria through its breeding programmes, says pulses such as cowpea are an alternative source of protein from the expensive animal sources.

Cowpea – a widely grown food and animal feed legume in the semi arid tropics in Africa and Asia – is one of the most drought-tolerant crops adapted to the dry areas of poor soils. But there is more. Pulses helping fix nitrogen in the soil thrive under uncertain growing conditions, making them climate smart.

“There is no doubt that pulses are very important in food and nutrition security in Africa,” says Christian Fatokun, a cowpea breeder with IITA. “However, they are a part of the solution to food and nutritional security in Africa. Apart from being good sources of plant based protein they also help in providing nitrogen in the soil for companion or following crops because they are capable of fixing atmospheric nitrogen.”

While strategic to ensuring food security in Africa, pulses are not being prioritised as an important crop, argues Charles Govati, a development specialist and chair of the Agriculture Supply Services Consortium (ASSC) in Malawi.

“Pulses are the perfect food for Africa but their production is challenged by imperfect policies,” Govati told IPS. “There too much lip service paid to pulses yet there are challenges of low production, poor soils, pests and diseases which affect their production. Farmers focus on growing more for income and less for food and nutrition, besides we need structured markets in Africa to boost production if we are serious about pulses in ensuring food security.”