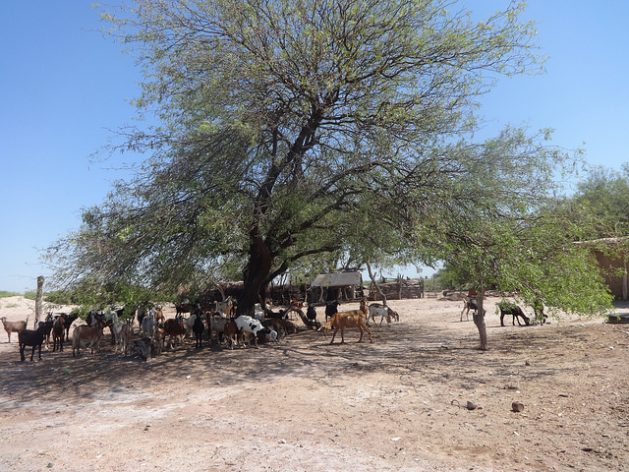 Livestock seek shade on a small farm in the arid centre of the northern Argentine province of Santiago del Estero, where men are forced to migrate to cities or to seek seasonal work in more fertile regions, fleeing from drought and poverty. Credit: Fabiana Frayssinet/IPS

BUENOS AIRES, Jun 16 2017 (IPS) - In Latin America and the Caribbean, which account for 12 per cent of the planet’s arable land, and one-third of its fresh water reserves, a number of factors contribute to soil degradation and to a rural exodus that compromises food security in a not-so-unlikely future.

These figures, and the warning, emerge from studies carried out by the United Nations Food and Agriculture Organisation (FAO) ahead of the World Day to Combat Desertification and Drought, celebrated on June 17. This year’s theme is “Our land. Our home. Our Future,” highlighting the link between desertification and rural migration, which is driven by the loss of productive land to desertification.

Over the past 50 years, the agricultural area in Latin America increased from 561 to 741 million hectares, with a greater expansion in South America, from 441 to 607 million hectares. This growth led to intensive use of inputs, degradation of the soil and water, a reduction of biodiversity, and deforestation.

Fourteen per cent of the world soil degradation occurs in this region, and it is worst in Mesoamerica (southern Mexico and Central America), where it affects 26 per cent of the land, compared to 14 per cent in South America.

“This vicious circle has to do with the historical backwardness of Latin American rural areas, where vulnerability to climatic phenomena aggravate other factors that drive people to migrate, due to the lack of opportunities and because what used to be their main economic activity, agriculture, no longer allows them to survive with dignity,” Saramago said from FAO’s regional office. -- André Saramago

According to Meza, soil degradation depends on factors such as the extent and severity of the degradation, weather conditions, the economic conditions of the affected populations and the country’s level of development.

He told IPS that the first reaction of people trying to survive is intensifying the already excessive exploitation of the most accessible natural resources.

The second step they take, he said, is selling everything they have, such as machinery, to meet monetary needs for education and healthcare, or to put food on the table.

“The third is the fast increase in rural migration: adult men or young people of both sexes migrate seasonally or for several years to other regions in the country (especially to cities) or abroad, looking for work. These survival strategies tend to generate a breakdown of the community and sometimes of the family,” he added.

“The outlook for the future is that as climate change advances and rural populations, particularly vulnerable ones, fail to become more resilient, these figures could significantly increase,” warned the FAO expert.

According to the Economic Commission for Latin America and the Caribbean (ECLAC), some 28.4 million Latin Americans live outside the countries where they were born, nearly 4.8 per cent of the total population of 599 million people.

Central America is the area with the most migration, with nearly 15 million migrants, who represent 9.7 per cent of the total population of 161 million people.

The International Organisation for Migration (IOM) defines “environmental migrants” as people or groups who are forced or choose to leave their communities due to sudden or gradual shifts in their environment that affect their livelihoods.

But for André Saramago, a FAO consultant on rural development, rural migration has multiple causes such as poverty, a lack of opportunities and, in some cases, such as the countries that make up the so-called Northern Triangle of Central America – Honduras, El Salvador and Guatemala – soaring rates of violence crime.

And these elements are now compounded by the vulnerability of homes to phenomena aggravated by climate change, such as increasingly intense and frequent droughts, he told IPS.

“This vicious circle has to do with the historical backwardness of Latin American rural areas, where vulnerability to climatic phenomena aggravate other factors that drive people to migrate, due to the lack of opportunities and because what used to be their main economic activity, agriculture, no longer allows them to survive with dignity,” Saramago said from FAO’s regional office.

According to the expert, reverting this phenomenon requires comprehensive responses, to manage land in a sustainable manner, preventing degradation and promoting recovery. He said, however, that this would not be enough to combat rural migration.

These are the tools, he said, “to reverse the vicious circle; it is crucial to recover and rethink the concept of rural development, where the joint elaboration of policies and the capacity to tackle the problem in a multidisciplinary and multisectoral manner are key.”

For his part, Meza said that one of these actions is improving the management and distribution of water. Over the last three decades, water use has doubled in the region – a much faster increase than the global rate. The agricultural sector, and particularly irrigation farming, represents 70 per cent of water use.

“From a social perspective, rural poverty is also reflected in a lack of access to water and land. Poor farmers have less access to land and water, they farm land with poor quality soil that are highly vulnerable to degradation. Forty per cent of the world’s most degraded land are in areas with high poverty rates,” he said.

The expert noted that there are numerous experiences that combine production and preservation of biodiversity, particularly indigenous and traditional agrifood systems, as well as management of shared resources and protection of natural resources, which provide a methodology and systematisation of practices and approaches.

Norberto Ovando, president of the Friends of the National Parks of Argentina Association and a member of the World Commission on Protected Areas, described some of the experiences in his country, where 70 per cent of the territory is threatened by desertification.

Eighty per cent of Argentina’s territory is dedicated to agricultural, livestock and forestry activities. Erosion is most acute and critical in arid and semi-arid areas that make up two-thirds of the territory, where the fall in productivity translates into a decline in living conditions and displacement of the local population.

“Currently many farmers in the world and in Argentina are using the drip irrigation system, which should be replicated around the world, and governments should adopt it as a state policy, assisting farmers with soft loans for installing it. With this system, up to 50 per cent of water can be saved, compared to the traditional system,” the environmental consultant told IPS.

Novando also said that the system of production of clean, varied and productive food, known as integrated polyculture agricultural-livestock-fish farming, currently widespread in Asia, should be adopted in the region.

“Public policies that promote support for family farming and that promote rural employment are essential,” he added.

“It could be said that in Latin America and the Caribbean hunger is not a problem of production, but of access to food. For this reason, food security is related to overcoming poverty and inequality,” he said.

“Effective management of migration due to environmental causes is indispensable in order to ensure human security, health and wellbeing and to facilitate sustainable development,” he concluded.