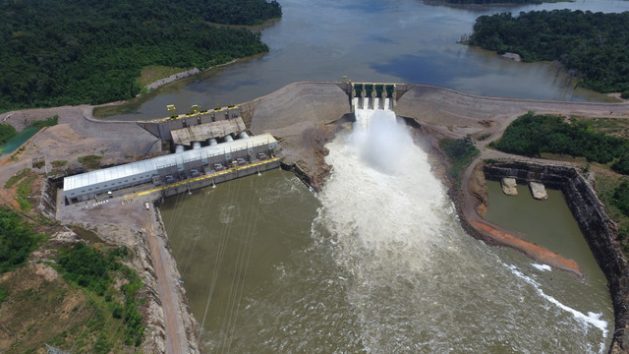 Aerial view of the TelesPires Hydropower Plant, which has been operating since 2015.With an installed capacity of 1,820 MW, it is the biggest plant on the TelesPires River, which runs across the west-central state of MatoGrosso. Built in the middle of the Amazon rainforest, the reservoir is only 160 sq km in size and only displaced one family. Credit: Courtesy of CHTP

PARANAITA, Brazil, Oct 21 2017 (IPS) - The burning down of the local forest, on Jun. 29, 1979, was the first step towards the creation of the city of Paranaita, in a municipality that is now trying to shed its reputation as a major deforester of Brazil’s Amazon rainforest and has named itself “the energy capital.”

Two large hydropower plants, one of which is still being built, have changed life in Paranaita. But its future is not yet clearly defined between the rainforest, cattle-breeding and soy and maize monoculture that have advanced from the south, deforesting the west-central state of MatoGrosso, which is the southeastern gateway to the Amazon jungle region.

Construction of the plants has brought investment, new housing and hotels and has given a new boost to the local economy in the city, which now has large supermarkets. “My hotel only had six apartments; now it has 12 complete apartments and a more attractive facade,”Francisco Karasiaki Júnior said brightly, during a tour of the area by IPS.

The Teles Pires dam, 85 km northwest of Paranaita, employed 5,719 workers at the height of construction, in July 2014.

The dam began to be built in August 2011 and was completed in late 2014, when work had already begun on the São Manoel – the former name of the Teles Pires river – dam, which is smaller and located farther away from the city, 125 km downstream.

São Manoel suffered delays when construction was temporarily halted by court order and when the company building it came close to bankruptcy as a result of corruption scandals, which led to massive lay-offs in late 2016.

“I lost money, many of the people who stayed here didn’t pay their bills,” complained Ster Seravali Petrofeza, 68, the owner of the Petros Hotel and of a large store that sells machinery and appliances for production, construction and households in a building on the main street of the city that she saw grow up from nothing.

“The era of the ‘garimpo’ brought me my best business,” she said, recalling the boom in informal gold mining that brought Paranaitaprosperity during the 1980s and the early 1990s.

The sales of dredges, motors and other equipment purchased by miners ensured the success of the business she ran with her late husband, who “used to spend all his time on the road, looking for products, assembling dredges and delivering them to the ‘garimpeiros’ (informal gold-miners) on the river, working round the clock,” she said. 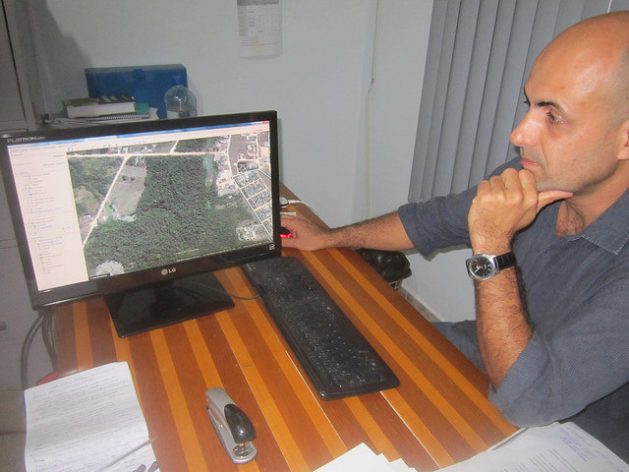 Pedro Correa, director of the environment in the Paranaita city government, looks at a photo of the city surrounded by forests, on his computer screen. Originally from the southern state of São Paulo, he worked for a few months on the construction of the Teles Pires hydropower dam and decided to stay in this town because he likes the quality of life. Credit: Mario Osava/IPS

“The ‘garimpo’ led to the emergence of 11 hotels in the city, between 1982 and 1989,” and put an end to frustrated attempts to grow tomatoes, coffee, cacao and tropical fruit like the guaraná, said Karasiaki, another pioneer who has lived 37 of his 53 years in Paranaíta and inherited the hotel built by his father.

“Our employees would disappear; they would go and ‘garimpar’ (mine for gold),” he said.

But the mining industry declined in the 1990s. The crisis was overcome by the intensification of the extraction of timber and the mushrooming of sawmills in the city. “We started selling chainsaws like hotcakes, about 12 a day,” said Petrofeza.

That era ended in turn the following decade, as a result of increasingly strict environmental controls.

The construction of hydropower dams gave the city new life, reviving the local market, “but they didn’t leave us anything permanent,” lamented the businesswoman, who was widowed in 1991.

Paranaita exemplifies the “boom and collapse” cycles that affect an economy based on the exploitation of natural resources in Brazil’s rainforest, said economist João Andrade, coordinator of Socioenvironmental Networks at the non-governmental Centre of Life Institute (ICV), which operates in the north of the state of MatoGrosso.

Mining, rubber, timber, livestock and monoculture – all environmentally unsustainable activities – have succeeded each other in different areas, some of which have now been affected by the construction of hydropower plants. 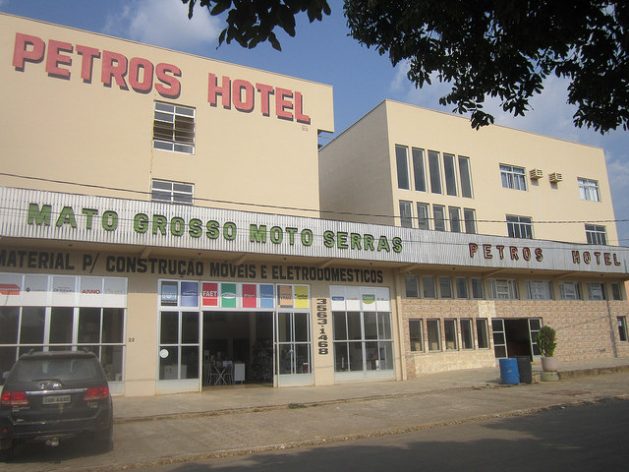 The hotel and construction materials store owned by Ster Seravali Petrofeza in the city of Paranaita, in the west-central Brazilian state of Mato Grosso. The business and its owner have experienced the economic cycles of boom and collapse in this city, which now aims to become the capital of hydroelectricity. Credit: Mario Osava/IPS

The plants do not change the model of occupation and domination of the Amazon, but could kick off a new cycle, by providing more accessible energy to the mining industry and facilitating the expansion of export agriculture with new roads, Andrade fears.

Paranaíta, a city of just under 11,000 people in 2010, according to the latest census, declared a state of emergency in November 2013, due to the collapse in public services, because the population had expanded by two-thirds in the first few years of construction of the TelesPires plant, according to the city government.

Rents, the prices of goods and services, crime rates, and demand for health and education suddenly shot up, said biologist Paulo Correa, director of Environmental Projects and Licensing in the city government and a former employee of the Teles Pires dam, who decided to stay in Paranaita.

Contagious diseases like malaria and sexually transmitted infections also increased when the construction work was at its peak in the affected municipalities, said Carina Sernaglia Gomes,analyst of municipal environmental management at ICV.

The number of rapes rose more than threefold in the city of Alta Floresta, an important regional hub of50,000 people, with an airport and institutions of higher learning. The total climbed from 11 cases in 2011 to 36 in 2015, according to police records, Gomes pointed out.

In Paranaita, homicides and other violent crimes rose from 20 to 70 cases in that period. 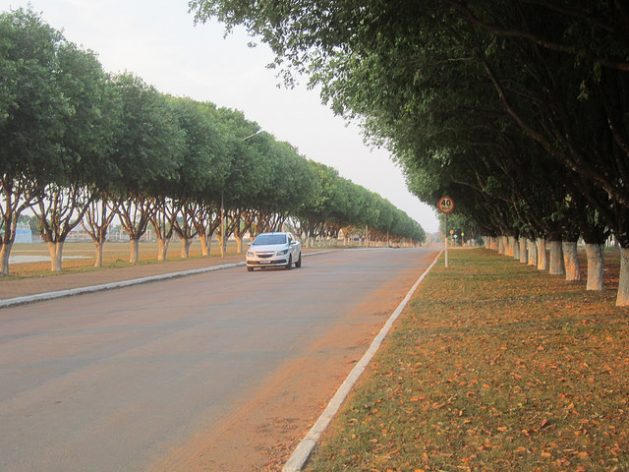 One of the new avenues in Paranaita, whose population rose 70 percent between 2010 and 2014, which threatened to bring about a collapse in public services, during the nearby construction of two hydroelectric dams on the Teles Pires river, at the gateway to Brazil’s Amazon jungle region. Credit: Mario Osava/IPS

These negative visions contrast with the enormous social and environmental investments made by the companies, especially the TelesPires Hydroelectric Company (CHTP). But nearly always in this kind of project, the compensation and mitigating measures arrive too late, after the worst impacts of the works have already been felt.

Paving the 55-km road to Paranaitaconnected the once-isolated city with the rest of the world. “It wasn’t an obligation, but we understood what the local populace was longing for and we did it,” said CHTP environment director Marcos Azevedo Duarte.

A road trip between the two towns was cut from three hours to just over half an hour, making it possible for the young people of Paranaitato study at the universities in Alta Floresta.

The training of 2,800 local workerswas “a legacy of knowledge,” said Duarte. Local labour power represented 20 percent of the company’s total at the height of construction.

The company returned outside workers to their homes after the work was done, to ease the demographic pressure on Paranaíta, the most heavily affected town due to its proximity and small population, he said.

Besides the 44 projects aimed at compensating for the damage in the affected municipalities, CHTP has attempted to boost local development.

Along with the city government and ICV, it has fomented improvements in production and administration in the rural settlement of São Pedro, population 5,000, located 40 km fromParanaita, and still dependent on food shipped in from southern Brazil.

Getting Paranaitaoff the Environment Ministry’s black list of municipalities guilty of the worst deforestation in the Amazon is a goal of the city government that has the support of CHTP. Reducing the deforested area and legalising rural properties in a national land registry are the requirements for achieving that.

With respect to indigenous people, who the company compensated with 20 specific programmes, mainly the donation of vehicles, boats, fuel and community centres, Duarte acknowledged a major failing: the flooding of a site sacred to the Munduruku people, the “seven falls”.

“There is no way to compensate for a sacred site,” and the company feels the obligation to address proposals like building a centre for memory and culture for local indigenous communities and handing over the funeral urns found in the excavation during the construction of the plant, he said.