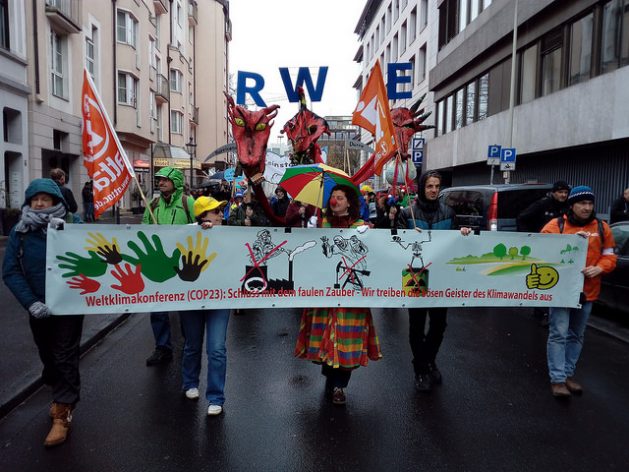 In the Nov. 11 Climate March through the main streets of the German city of Bonn, protesters called for an end to the use of coal as a power source, especially by German companies, such as RWE. Credit: Emilio Godoy / IPS

BONN, Nov 15 2017 (IPS) - Despite growing global pressure to reduce the use of coal to generate electricity, several countries in Latin America and the Caribbean still have projects underway for expanding this polluting energy source.

These plans run counter to the climate goals voluntarily adopted by the countries in the region and to the commitment to increase clean and renewable sources, as part of the Paris Climate Agreement, approved in December 2015.

“Latín America doesn’t have a major global role in the sector, but it does have influence on the region…Colombia (for example) exports lots of coal. The problem is that there are many projects in the pipeline and that’s a threat of locking-in dependency for years,” Heffa Schucking, head of the non-governmental organisation Urgewald, told IPS in the German city of Bonn.

The Global Coal Exit List (GCEL), drawn up by the German organisation, reflects the use of coal in the region, in a global context.

“A speedy coal divestment by the financing industry isn't only a matter of avoiding stranded assets, but keeping a livable planet too.” -- Heffa Schucking

Urgewald presented the report during the 23rd annual Conference of the Parties (COP 23) of the United Nations Framework Convention on Climate Change (UNFCCC), taking place Nov. 6-17 in Bonn, a city that is part of what used to be Germany’s industrial belt, driven precisely by coal.

The list, a comprehensive database of some 770 companies participating in the thermal coal industry, points out that in Latin America and the Caribbean, the installed thermoelectric capacity based on coal amounts to 17,909 MW, most of which operates in Mexico (5,351 MW), Chile, (5,101 MW) and Brazil (4,355 MW).

However, new projects for the use of coal will add an additional 8,427 MW, of which Chile will contribute 2,647, Brazil 1,540, the Dominican Republic 1,070, Venezuela 1,000, Jamaica 1,000, Colombia 850 and Panama 320. These ventures will further expand the use of coal in the region, hindering its removal to combat climate change.

The GCEL identifies 14 companies based in the region, of which five are Brazilian, another five Colombian and one per country from Chile, Peru, the Dominican Republic and Venezuela.

It also identifies transnational corporations that operating in the coal industry in the region such as the U.S.-based AES and Drummond; Italy’s Enel, France’s Engie, the Anglo-Swiss Glencore, the Anglo-Australian BHP Billiton and the British Anglo American.

At COP 23, whose electricity comes partially from the lignite mine Hambach, near Bonn, the protests against coal have resonated, due to the major role it plays in the emission of greenhouse gases responsible for global warming. 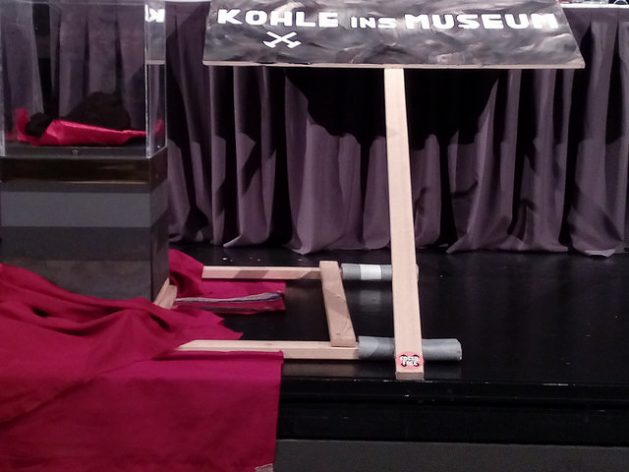 At the climate summit in Bonn, coal is a main focus of criticism from environmentalists and academics. In the image, a banner reads “coal to museums”, during the hearings of the International Rights of Nature Tribunal, which were held on Nov. 7- 8 in the German city. Credit: Emilio Godoy / IPS

Colombia extracts the largest volume of coal in the area – 90 million tons in 2016 – in a sector dominated by Drummond, Glencore, BHP Billiton and Anglo American.

Since 2013, coal extraction in Colombia has ranged between 85 and 90 million tons, mainly from open-pit mines and chiefly for export.

Meanwhile, thermoelectric generation from coal climbed to 1,369.5 MW in 2016.

In 2015, Mexico produced about 7.25 million tons a year, the lowest level in recent years due to the fact that the Federal Electricity Commission (CFE) has reduced its coal imports.

Chile is one of the largest thermoelectric generators in the region, with 29 coal-fired power plants that produce 14,291 MW, equivalent to 61.5 percent of the national installed capacity.

Carlos Rittl, executive secretary of the Climate Observatory, a network of Brazilian environmental organisations, complained that his country lacks a clear policy on coal.

“There are renewable energy goals for 2030, but the electricity capacity continues to be auctioned for fossil fuels and more thermoelectric plants are being built. There is no link between the energy agenda” and the voluntary goals of reducing polluting gases in Brazil, Rittl stressed.

The Brazilian ecologist is one of the 20,000 participants at COP 23, who include academics and delegates from government, civil society, international organisations and the business community.

The GCEL covers 88 percent of the world’s coal production and 86 percent of coal-driven thermoelectric installed capacity.

In addition, the database identifies 225 companies that plan to expand coal mining, and 282 that project more power plants.

The campaign seeks for investors to withdraw funds from the coal industry, in order to cancel new projects and gradually close down existing plants.

Colombia has 16.54 billion tons in coal reserves. Mariana Rojas, director of Climate Change in the Environment Ministry, acknowledged to IPS the difficulty of abandoning coal.

“Different strategies are being used for the different sectors. We want to encourage the increase of renewables in the energy mix; they have become more competitive due to the lower prices. But we cannot reach all sectors,” she said.

Coal was left out of the carbon tax created by the December 2016 tax reform – a reflection of the industry’s clout.

The report “Coal in Colombia: Who wins? Who loses? Mining, global trade and climate change“, drawn up in 2015 by the non-governmental Tierra Digna Centre for Studies on Social Justice, warned that the Andean country plans to continue mining coal until at least 2079.

Brazil already has another plant under construction with a capacity of 340 MW, and plans for at least six more facilities, that would generate 804 MW.

Mexico is in a similar situation, since the current mining permits would expire in 2062, for over 700 million tons in reserves.

Since 2015, the state-run company CFE has been holding online auctions of coal, to control the supply of more than two million tons per year and regulate the activity.

Urgewald’s Schucking called for turning off the financial tap for these projects. “A speedy coal divestment by the financing industry isn’t only a matter of avoiding stranded assets, but keeping a livable planet too.”

Germany has set a 2018 deadline for shutting down its last coal mines, while Canada announced that it would stop using coal by 2030 and Italy promised to do so by 2025.

“The first step is to eliminate subsidies for coal” and redirect them to solar and wind energy, Rittl proposed.