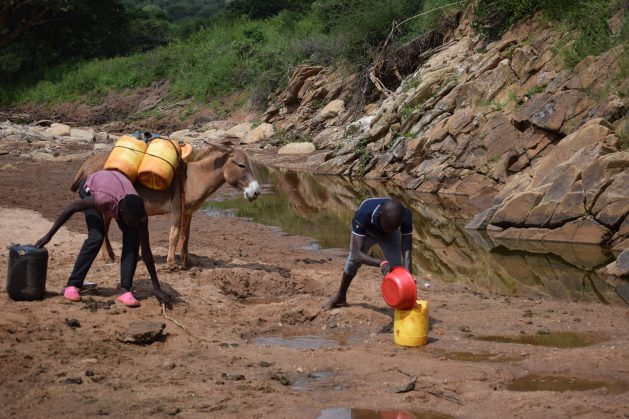 11-year-old Fatoumata Binta (left) and her brother Iphrahima Tall (right) collect water from a dry river bed. This summer, the family has struggled to get enough water. Credit: Stella Paul/IPS

HYDERBAD, India, Jul 22 2020 (IPS) - With Tabaski (Eid al-Adha) around the corner, 11-year-old Fatoumata Binta from Terrou Mballing district in M’Bour, western Senegal, wakes up early and joins her brothers Iphrahima Tall and Ismaila to fetch water from a river several miles from home.

This summer, the family has struggled to get enough water as city taps have often run dry. But because of the coronavirus, they need extra water for maintaining cleanliness and frequent handwashing.

But there is another reason why they need additional water.

In a few weeks time, Muslim families will sacrifice a livestock animal to mark Tabaski. Binta’s family have been raising goats to sell on the market ahead of the festival, but the animals need lots of water.

“If they don’t drink enough, the goats will lose weight and sell for less,” Binta, who has not been to school since March because of the COVID-19 pandemic, tells IPS.

Schools in Senegal, which closed on Mar. 15, were scheduled to reopen on Jun 2. However, the return was cancelled as several teachers tested positive for the coronavirus across the country, but mainly in Ziguinchor in the southern Casamence region. To date, the country has officially counted more than 8,985 coronavirus cases, including 174 deaths.

But when schools reopen in August-September, Binta might not return. The reason, she says, is that her community school doesn’t have enough water. Besides, there are no toilets for girls and Binta, who has just begun to menstruate, feels too shy to use a shared toilet.

According to the recently published United Nations Educational, Scientific and Cultural Organisation (UNESCO) report on global education, only one percent of schools in Senegal have separate toilets for girls. The dismal performance has actually put the country at the bottom of a list of 45 developing countries.

Experts say that the core reason behind this is the low priority attached to girls’ education. Although the government has been focusing on girls’ enrolment at elementary level, the focus on improving their water and sanitation needs has remained a neglected subject.

Fatou Gueye Seck, programme coordinator from the Coalition of Organisations in Energy for the Defence of Public Education (COSYDEP Senegal), shares an example.

Since 2016, the number of people enrolled in Functional Literacy Centres (CAF) has fallen by more than half, with the number of learners decreasing from 34,373 to 15,435. This underperformance is explained by the insufficiency of the overall amount of funding for CAFs.

“The funding is supposed to be one percent of [public spending] but in reality that is not happening. Unless the funding is increased, in the middle and secondary cycles, gender parity in the country’s education sector cannot be reached until 2021,” Seck tells IPS.

Seck is also the president of the education theme of the Deliver for Good Senegal campaign, an evidence-based advocacy and communication platform that promotes the health, rights and wellbeing of girls and women. The campaign is part of a larger, global campaign powered by Women Deliver.

“In Senegal, the gender index is still against girls,” Seck told IPS in an earlier interview. 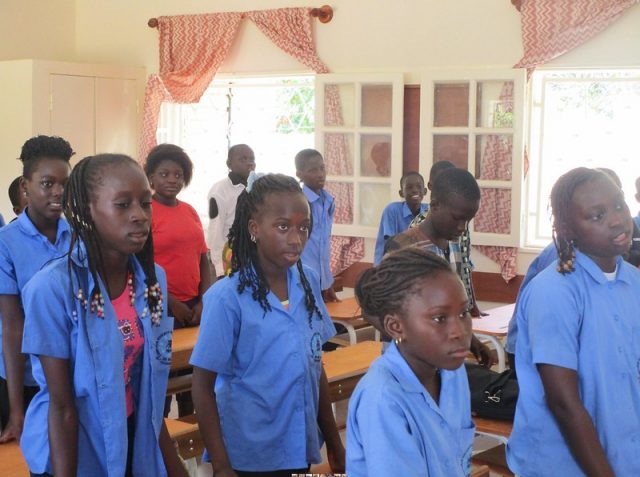 Girl students at a school in the Pikine suburb of Dakar, Senegal. A recent United Nations report says, only one percent of schools have a separate toilet for girls. Credit: Stella Paul/IPS

In urban Senegal, water shortages have been frequent for several years, affecting thousands of households.

But this summer, the shortage has been more acute, as most homes have seen their taps run dry or reduced to a trickle.

In recent weeks during the  emergency coronavirus lockdown, protests have rocked both the streets of the capital Dakar and M’Bour, a city in western Senegal. Many citizens complained that water supply has worsened since this January when the government signed over the rights of water distribution and management, for 15-years, to a private company called Sen’eau.

As the protests grew, the company made a public statement, blaming the crisis on a storm that damaged some of its infrastructure and promised to normalise distribution by next year.

The government has also assured the public that a solution will be found. On Jun. 17, following a cabinet meeting, Senegalese President Macky Sall stressed  “the imperative to mobilise technical expertise and financial resources to ensure the optimal functioning of hydraulic infrastructures”.

But in the meantime, citizens are spending extra money on purchasing water. Although the rainy season arrived in July, urban Senegal is still struggling with supply shortages of daily water.

Fatima Faye, a 23-year-old health worker in M’Bour, tells IPS that she spends $10 every week on purchasing water: “The taps only give droplets, but the water bills are quite big.”

According to Global Waters, an agency supported by the USAID Center for Water Security, Sanitation, and Hygiene, 49 percent people in Senegal lack access to proper sanitation facilities while 20 percent of Senegalese don’t have access to safe drinking water.

For them the only source of water are open wells and rivulets. So they drink non-potable, unfiltered and untreated water.

Amina Diop, a fruit seller from Guediyawaye, a suburb in Dakar, has been using an open well for all her domestic water needs. Her entire family, including her two daughters, also drink from the same water source.

Before the lockdown began, one of her girls, 10-year-old  Aminata, often missed school. “Her stomach ran, so I just let her be at home,” Diop tells IPS. Aminata was likely ill because of contaminants in the water source.

But a Women Deliver policy brief on access for girls and women to resources such as water and sanitation notes the benefits of “bringing sanitation options closer to or within the home is a critical improvement for women in the community”.

“It means they won’t have to walk long distances to find a site that is private, which decreases the risk of gender-based violence. It saves them time and energy, reduces their exposure to violence, and improves their nutritional status, which in turn has a positive impact on their reproductive health and pregnancy outcomes,” the brief notes.

It also notes a 2012 study in sub-Saharan Africa that showed a 15-minute decrease in time spent walking to a water source is associated with;

According to a 2017 survey done by Water Supply and Sanitation Collaborative Council (WSSCC) — the United Nations-hosted organisation dedicated to advancing Sustainable Development Goal 6 of providing clean water and sanitation for all people — 56 percent of girls students in Senegal miss school due to menstruation and inadequate water, sanitation and hygiene facilities.

Some Senegalese NGOs have started to fill the knowledge gap by holding informal classes and workshops with young female students. One of these is Apiafrique, a Dakar-based social enterprise that produces environment-friendly feminine hygiene products,

Marina Gning, the CEO of Apiafrique, has held several workshops for school-going students over the last two years where she teaches them the importance of maintaining menstrual hygiene and also trains them in making sanitary pads that can be reused.

“Throughout Africa, women and girls are often thought of as impure during menstrual cycles, and face societal exclusion, as well as a lack of adequate sanitation infrastructure in schools and homes,” Gning tells IPS.

Between the fight against pandemic, which requires extra water for frequent handwashing, and the country’s water-supply crisis, maintaining menstrual hygiene has become a challenge.

“The challenge now, is keeping the sanitary pads clean. Reusable pads means something that you need to wash. But if there is not enough water, how can you do any washing? So, what use can you make of the knowledge?” Amelie Ndecky, a college student who attended one of Gning’s workshops in 2018 in Ngaparou, a suburb of M’Bour, asks IPS.