Once omitted from biodiversity treaty negotiations, indigenous people now have a say in a landmark global framework expected to be signed by 190 countries 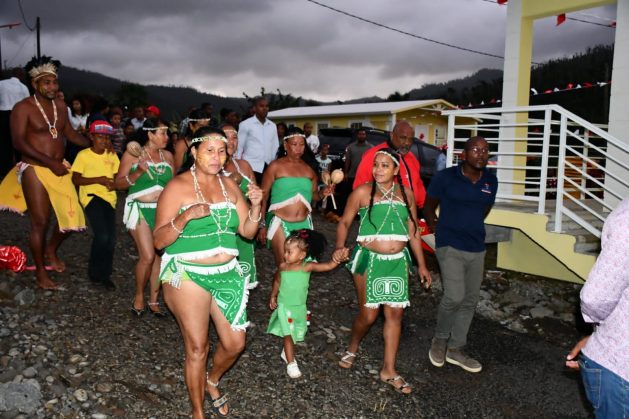 Members of Dominica’s Kalinago community, the largest indigenous group in the Eastern Caribbean, on a tour with government officials at a recent event in the Kalinago Territory. Courtesy: Alison Kentish

UNITED NATIONS, Dec 23 2020 (IPS) - The picturesque Mahuat River in Dominica is one of 8 communities that make up the Kalinago Territory – a 3,700-acre area on the Caribbean island’s east coast that is home to the Kalinago people, the largest indigenous group in the Eastern Caribbean. It is where 19-year-old Whitney Melinard calls home. Melinard is among a rising group of Dominica’s Kalinago youth, using their voices and platforms to speak out on issues affecting their people.

The Kalinago people have a chief and a representative in the House of Assembly, but some of their longstanding concerns mirror those of other indigenous groups, who for the first time have a say in a major biodiversity framework that is expected to be signed by 190 countries next year. This week, indigenous leaders from Asia, the Artic, Latin America and the Caribbean met virtually to discuss the outcomes of a Dec. 1-3 meeting on the post-2020 biodiversity plan, which will guide protection of animals, plants and vital ecosystems for the next ten years. The leaders want concrete action to respect traditional knowledge at the center of the plan, something leaders committed to ensuring over the last ten years, but failed to do. For Kalinago youth like Melinard, this call is urgent.

“Governments must work with us to protect and preserve the natural environment by firstly acknowledging and respecting that fact the indigenous peoples around the globe have always resided in perfect harmony with mother nature. With this in mind, we need strengthened collaboration and consultation between their agencies and our community especially when making decisions that will affect our environment. By so doing, the Kalinagos will be able to contribute to the decision-making process,” Melinard told IPS.

Indigenous people live where 85 percent of the world’s biodiversity is located and the leaders say it is therefore critical that they are part of any major conservation plan. Senior Policy Advisor of the Forest Peoples Programme, Joji Carino says the international community has failed to deliver on some key promises of the 2011-2020 Strategic Plan of the Convention of Biological Diversity, particularly provisions to integrate traditional knowledge, innovations and practices of indigenous communities in conservation and sustainability initiatives. She says the world cannot afford to get the new framework wrong.

“A common message is that global biodiversity targets have not been met, with abundant evidence about how our current systems are unravelling the Earth’s support systems. The target on traditional knowledge was similarly unmet, with only ten percent of parties reporting inclusion in the national biodiversity strategies and action plans,” she said.

Indigenous leaders say their people continue to fight for land rights as they face displacement due to activities such as mining and development. They say the COVID-19 pandemic presents an ideal time to reflect on interconnectedness and approach biodiversity from a resilience-based, indigenous-inclusive perspective.

In an interview with IPS, international public lawyer and Indigenous Peoples’ rights expert Viviana Figueroa said she is optimistic about the way forward. She says the world is recognising the contribution of indigenous people as guardians of the natural world. She warns however that while traditional knowledge is critical to saving the planet, indigenous rights must be respected.

The leaders say in indigenous people continue to be characterised as backward. They argue that respected for their people should also include land rights and are calling on governments to make secure land tenure a reality for them. For some indigenous communities, living on communal leads to displacement from their ancestral homes. For the Kalinago in Dominica, land ownership could bring access to more opportunities for security and upliftment.

“Having land titles would place every single Kalinago on a level playing field with majority of other Dominicans. A land title can lead a Kalinago to become economically independent, by either investing in a business or to access financing to pursue educational goals. This can be done while maintaining the integrity of our space,” Melinard told IPS.

The Post-2020 Biodiversity Framework is based on the premise that urgent action is needed globally ‘to transform economic, social and financial models, so that the trends that have exacerbated biodiversity loss will stabilise in the next 10 years and allow for the recovery of natural ecosystems in the following 20 years, with next improvements by 2050 to achieve the vision of living in harmony with nature by 2050.’ Indigenous leaders like Joji Carino, the goals are necessary and attainable, but not in the absence of the indigenous community.

“So from the evidence, it shows that unless indigenous peoples are empowered and our knowledge truly respected, meaning to say we’re also at the table when, for example, development plans or spatial planning is happening, then we will go down the road of business as usual.”