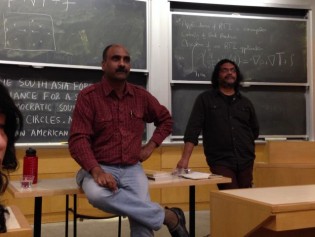 By Beena Sarwar
On one of her many visits to Pakistan recently, Sarah Peck, director of the US-Pakistan Women’s Council, spent some time talking to young women medical students in Pakistan. She was struck by their passion and commitment -- and by the hurdles they face.

By Beena Sarwar
Efforts to promote the use of hydraulic fracturing, a controversial method of obtaining oil and natural gas, face stiff opposition from researchers and citizens who say that in its present form, the technology's risks far outweigh its worth.

By Beena Sarwar
"Imagine you have dual nationality, say Haiti and the United States. You go to apply for a visa at a foreign embassy in Washington, but are told that you can't use your U.S. passport unless you renounce your Haitian nationality. If you don't, you must apply and travel using your Haitian passport."

By Beena Sarwar
Karachi-based, Trinidad-born and educated Veena Masud is a school principal who wants to see Pakistani women shine in the international sports arena.

By Beena Sarwar
‘Give peace a chance' may just be another cliché for many, but for women who have suffered the ravages of war, endless strife and other forms of conflict, joining hands to find meaningful solutions to their collective aspiration lends it a whole new meaning.

By Beena Sarwar
The brazen armed attack on a police academy near Lahore on Monday underlines the danger that the Pakistani state faces from militancy linked to the ‘war on terror', but with historic roots in the earlier Afghan war of liberation from Soviet occupation, or ‘jihad' against ‘God-less communists'.

By Beena Sarwar
A late night meeting between Pakistan's army chief, President and Prime Minister led to the dramatic announcement in the wee hours of Monday morning that Iftikhar Mohammed Choudhry would be restored as Chief Justice.

By Beena Sarwar
Barely a year after being elected, the Pakistan government faces a political storm involving a street agitation spearheaded by lawyers and opposition political parties allied with religious parties.

By Beena Sarwar
South Asia seems to be caught in a vortex of violence as the countries that form this region - from Sri Lanka at the southern-most tip, Bangladesh to the east, Nepal crowning the north, Pakistan along the west and India in the middle - deal with internal nightmares that their governments routinely blame on neighbours.

By Beena Sarwar
The political chasm in crisis-riddled Pakistan has deepened after a Supreme Court ruling barred from political office opposition leader Nawaz Sharif and his younger brother Shahbaz Sharif, chief minister of Punjab - the country's most populous and powerful province.

By Beena Sarwar
Outraged by an attack by right-wing Hindu militants on women emerging from a pub in Mangalore, Karnataka state, activists in India have initiated a ‘Pink Chaddi’ (underwear) campaign in which they are sending pink panties to members of the Sri Ram Sena (Army of Lord Ram) on Valentines’ Day.

PAKISTAN: Opening the A. Q. Khan Can of Worms

INDIA/PAKISTAN: Pleas For Sanity as Sabres Rattle Over Mumbai Mayhem

By Beena Sarwar
The pattern is all too familiar. Every time India and Pakistan head towards dialogue and detente, something explosive happens that pushes peace to the backburner and drags them back to the familiar old tense relationship, worsened by sabre-rattling war cries from both sides.

By Beena Sarwar
The terrorist attacks unleashed in the Indian port city and financial hub of Mumbai continue to reverberate through Pakistan at a personal level and on the media.

By Beena Sarwar
Benazir Bhutto has paid the heaviest price possible for her insistence on engaging in participatory, democratic politics in Pakistan.
Next Page »
ADVERTISEMENT ADVERTISEMENT