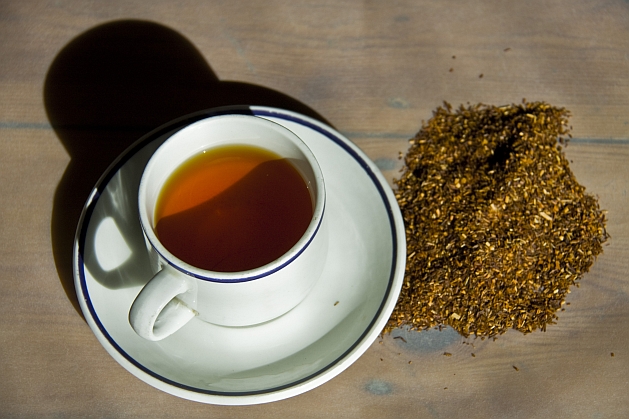 CAPE TOWN , Nov 24 2011 (IPS) - South Africa’s Rooibos tea has become a popular drink all around the globe. But prices of the herbal brew could shoot up within the next decade, as the Rooibos plant can only grow in one small region in the world – which is severely affected by climate change.

Pieter Koopman stoops down to inspect a young Rooibos bush. The farmer, who owns an 850-hectare tea farm in the Suid Bokkeveld, in western South Africa, is greatly concerned about the upcoming harvesting season. Droughts and erratic rainfall have destroyed more than half of his crop over the past decade. But he has hope that this year will be a better one.

“The last 10 years have been very hard. We had to learn to adapt to new weather conditions, and we still do. We can’t sit back and wait,” says Koopman. Vital rain, which usually occurs in the South African winter between May and August, the traditional Rooibos planting season, has not been falling. “All our seedlings died. We made losses every season,” the farmer sighs.

In response, Koopman and other farmers in the area started to change their farming techniques. They planted windbreaks with indigenous plants to stop soil erosion, built water catchments and, perhaps most importantly, started to plant seeds instead of seedlings. “Seeds take longer to grow, but are less sensitive to lack of rain,” Koopman explains. “It was a tough lesson to learn.”

If Koopman and his peers manage to successfully adapt to climate change, Rooibos lovers all over the world can breathe a sigh of relief: because the entire global supply of the red bush tea comes from a single production area, the South African Suid Bokkeveld, which measures just 20,000 square kilometres.

Attempts to cultivate it outside of this region have failed, as the plant needs the harsh conditions of the region, where temperatures drop to zero degrees Celsius during winter and rise to a blistering 48 degrees Celsius at the height of summer.

The farmers’ concerns are justified. Experts predict that agriculture in sub-Saharan Africa will be severely affected by climate change. By 2050, changes in weather patterns will cause average rice, wheat and maize yields to decline by up to 14 percent, 22 percent and five percent, respectively, according to the Washington DC-based International Food Policy Research Institute.

“That’s why the long-term prosperity of Rooibos farmers will depend greatly upon their ability to change their farming practices to these new weather conditions,” says Noel Oettle, rural programme manager of the Environmental Monitoring Group (EMG), a non-governmental organisation helping Rooibos farmers increase their resilience to climate change through natural resource management, monitoring weather patterns, soil and water conservation as well as promoting agricultural biodiversity.

“Only if farmers include in their decision making the likelihood of extreme weather events and focus on sustainable production, can the rest of us continue to enjoy Rooibos tea,” reckons Oettle.

Rooibos tea has become a popular drink around the globe not only because of its sweetish nutty taste, but due to its many health benefits. Caffeine-free and rich in anti-oxidants, Rooibos contains a wealth of minerals, such as zinc, copper, calcium, magnesium and potassium and is known to act as a digestive aid as well as an anti-carcinogenic, anti-inflammatory and anti-viral.

According to the South African Department of Agriculture, the country exports about eight tonnes of Rooibos tea per year to key foreign markets, such as Germany, Netherlands, United Kingdom, Japan and the United States, but also to Chile, Poland and Russia.

Rooibos tea farming remains a small industry, with about 300 farmers, most of them smallholders who employ a handful of workers full-time, plus seasonal workers during harvest. The Suid-Bokkeveld is a poverty-stricken area that has seen slow economic improvement since Rooibos has become popular in foreign countries.

“Climate change is likely to have a negative impact on those exports because of the plant’s geographic limitation, but also because there exists only one species of Rooibos. If it gets wiped out, that’s it,” warns Rooibos expert Dr. Rhoda Malgas, a researcher at the Department of Conservation at the University of Stellenbosch in South Africa. By comparison, there are 25 species of Honeybush, another South African herbal tea of the fynbos variety.

One option to save South Africa’s Rooibos plant is to conserve the wild Rooibos plant, Malgas believes, which has been growing naturally in the Suid Bokkeveld for centuries. Wild Rooibos is hardier and more heat resistant than its cultivated cousin, with a more elaborate root system that can survive less rainfall.

“It would be wise to start building seed banks. If you conserve wild Rooibos, you can conserve the genetic material from which the cultivated Rooibos tea is derived,” the scientist suggests.

Some Rooibos farmers have already caught on to the idea. Laurenz Dworkin, who owns a 100-hectare tea field in the Suid Bokkeveld, says he has considered harvesting wild Rooibos in addition to the cultivated variety. He also plans to collect its seeds to be able to protect his farm from the effects of climate change. “Wild Rooibos has not become a commercially viable product yet, but it has potential,” he believes.

But Dworkin is concerned that the trend to commercialise the wild variety will ultimately do more harm than good. Because it grows more slowly, wild Rooibos cannot be harvested on the same scale as cultivated Rooibos – it can only be picked every two years. Yet, farmers desperate for quick profits might harvest the plant annually all the same, and ultimately destroy it.

“We desperately need responsible farmers who think long term and don’t kill the plants for fast profits,” says Dworkin. “Instead, we should work on the assumption that Rooibos prices will keep going up. The plant might become more valuable because yields will decrease due to changing weather patterns.”

Although EMG supports the farmers, it remains their own decision what farming practices they apply. Farmers are often reluctant to take the risk to try new approaches and Rooibos farming remains a small industry, without large amounts of research money behind it.

If Dworkin is right, a hot cup of Rooibos tea might soon cost consumers a premium.