Fishermen Caught on a Political Hook 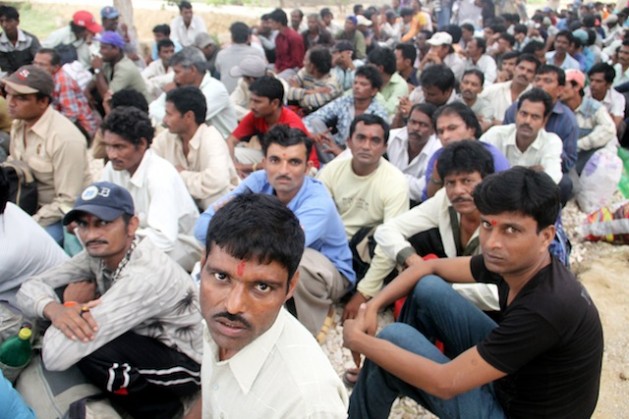 Indian fishermen waiting after release from jail in Pakistan to board buses to India. Credit: Fahim Siddiqi/IPS.

KARACHI, Jul 4 2012 (IPS) - “The number will never come to zero and in a few months you will see as many captive fishermen, maybe even more to fill the prison barracks,” says Mohammad Ali Shah of the Pakistan Fisherfolk Forum (PFF), following the release of more than 300 Indian fishermen from Pakistani jails.

“Their release depends on the ebb and flow of political tension between the two countries, not on whether they have completed their term,” Shah says. “It’s just a game for our rulers in which these fishermen are mere pawns.”

Of the 311 Indian prisoners freed last week, 20 were juveniles.

Shah says such release is often reciprocal, and he expects some 20 to 30 Pakistani fishermen of an estimated 130 in India to be released soon.

The PFF, a non-governmental organisation working for the rights of the local fishing community, says the penalty for trespassing is six months imprisonment, but they are rarely released within that period, and languish in jail for years.

“During the cyclones of 1996 and 1999, 63 fishermen remained missing and we’d thought they’d been annihilated by the waves. About six months back, when a few Pakistani fishermen were released by India, they told us some 40 of them were alive.”

Nazir Hussain Shah, superintendent at Malir district jail in the southern port city of Karachi says that since the Pakistan People’s Party came to power four years back, the condition of prisons and prisoners has improved, and the release of Indian prisoners has become quicker. He says this is because President Asif Ali Zardari, co-chairman of the PPP, was incarcerated in the same prison in the late 1990s.

Capturing small fishing boats that may stray into the other’s territory has become a common game for maritime agencies of both India and Pakistan.

“I think there is a lot of money involved in this, and vested interests do not want to find a solution to this humanitarian issue,” Justice Nasir Aslam Zahid, member of the Pakistan-India Joint Judicial Committee on Prisoners, tells IPS. “Has anyone asked what happens to the catch that is confiscated along with the boat and the fishermen?

“The boats are worth millions of dollars, and till some years ago they were auctioned off, but I have never seen a public announcement of this. Why are legislators not raising these questions?”

Till the late 1980s, fishermen who were captured were always released, and the boats handed over to the coast guards. “They were repaired and returned,” says Shah.

The recent release has not ended the problem. “There are 132 Indian fishermen who are still with us,” says Superintendent Shah. “It takes time to get their nationality verified. Their names and addresses are sent to the Indian High Commission and they confirm the person is an Indian citizen before he can be released.

The same procedure is adopted by the Pakistan High Commission in Delhi “to make sure no spies enter,” says a jail official.

He often gets philanthropists to help buy their passage out. “Many remain in prison because their country does not have the resources to pay for their return.”

The maritime boundary between India and Pakistan remains unresolved nearly 65 years after the partition of the Indian sub-continent.

The release of fishermen has been due mainly to the efforts of rights activists, says Zohra Yusuf of the Human Rights Commission of Pakistan.

“A more humanitarian approach is needed by both sides. In most cases, fishermen are unaware they have entered another country’s waters, and sometimes there’s the lure of a bigger catch. Their cases should be resolved within days; punishment should be rational and based on humanitarian principles. Some are underage and some have even died while in custody,” says Yusuf.

Justice Zahid points out that “there is no visible line and no instruments on the boats that can show where one country’s boundary ends and the other country’s begins.”

The joint judicial committee set up in 2008 has been calling for immediate release of all fishermen by both countries. Zahid says both governments lack the “political will” to find a permanent solution.

Shah of the PFF says the present committee could be modeled on the lines of the one between Sri Lanka and India.

“When fishermen are caught for trespassing, their cases are decided immediately by this committee which has members from the fisherfolk community, lawyers and government officials.”

Most of the Indian fishermen are from the state of Gujarat where they would earn no more than Rs 1,800 (32 dollars) a month if they worked as farm hands. And so they take up the riskier fishing that can fetch them three times as much, but only if they bring home a catch.

In Pakistan the fishing business is slightly different. These fishermen usually take heavy loans to buy their boats. When a boat is impounded they are ruined.