BANGALORE, Jul 31 2012 (IPS) - It took six years for a dedicated team of scientists from the Wildlife Institute of India, wildlife officials from six Indian states and officials from the federal ministry to secure international protection for one of India’s most precious biological reserves. 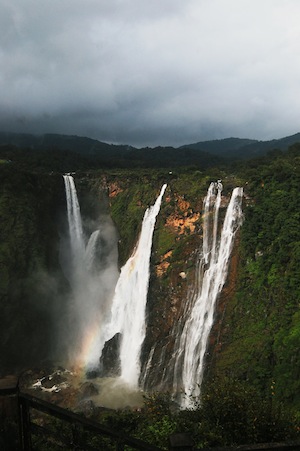 The mountain range, which geologists estimate to be more than 150 million years old – older even than the Himalayas – runs along the country’s western coast and is the thought to be the last vestige of all representative ecosystems in the subcontinent.

More than 62 rivers originate in the Western Ghats, serving the water needs of at least 74.85 million people around the Indian Ocean rim in 28 countries.

The forests here are also crucial catchment areas for monsoon rains. The mountain range runs parallel to India’s west coast for a distance of nearly 1,600 kilometres, averaging a height of 1,200 metres above sea level. Hardly anywhere else in the world is there a more conducive rainfall laboratory occurring so naturally. Small wonder, then, that 17 countries in Asia supported India’s nomination of the Western Ghats for World Heritage Site protection.

Grasslands that flank the valley forests harbour rare wildlife like king cobras, Malabar pit vipers, cobras, kraits and pythons. At least 508 species of birds, 156 species of reptiles, 334 species of butterflies, 120 species of mammals, 121 species of amphibians and 218 species of fish are endemic to the Ghats.

The cloud-kissed mountains harbour more than 4000 species of endemic flora; a single cave in the Kudremukh forest sprouts three rivers – the Tunga, Bhadra and Netravati.

A total of 39 sites are earmarked for UNESCO inscription, effectively protecting their fragile conservation status with solid international monitoring.

Conservationists who have long lamented the weakness of environmental protection and conservation laws in India were quick to praise UNESCO’s decision.

But the move is now facing stiff opposition from political leaders and businessmen, whose plans for anthropocentric development of the reserve will effectively be thwarted.

In the past, mine pits have been “excluded” from the environmental mandate, allowing mining to continue in enclosures where conservation laws were effectively rendered defunct.

With international observation it will no longer be possible to manipulate conservation laws to allow activities like mining, dam construction, hydel power projects or highway construction.

The governments of Karnataka and Kerala in particular are strongly against additional protection of the mountain range, with the Karnataka Legislative Assembly going so far as to adopt a resolution to oppose the UNESCO tag, while local politicians in both states insist that existing laws are adequate to safeguard the biodiversity hotspot.

“Conservation of the Ghats should come from concern within rather than attention from the outside,” Dr. K.N. Ganeshiah of the University of Agricultural Sciences told IPS. “The Western Ghats Ecology Expert Panel set up by the federal Ministry of Environment and Forests has done a far more meaningful job of advising what we need to do and those recommendations are more inclusive and elaborate than what the World Heritage tag can offer,” he stressed.

He is not alone in his trepidation. The Ghats’ rich terrain and sprawling river systems make ideal real estate for development projects involving hydel power and mining. The forest minister of Karnataka bemoaned the fact that “even development of eco tourism will be affected” by UNESCO’s strict conservation standards.

That it took an Indian Supreme Court ruling to halt construction of the seventh dam across the Kalinadi River that meanders through virgin jungle in the Western Ghats speaks volumes about the appalling lack of political will for conservation.

Similarly, it was the Supreme Court that put a halt to iron ore mining in the Kudremukh forest in 2000, tipping the scales against economic profits in favour of long-term protection of the fragile ecosystem, which contains the largest valley in all of Asia and is home to the endemic rainforest species Poeciloneuron indicum.

If not for a Supreme Court verdict in 1996, mining in the Dandeli Anshi Tiger Reserve in the Western Ghats would never have ceased.

Such interventions have repeatedly vindicated conservationists’ calls for international monitoring of the site.

Experts argue that the presence of at least 50 dams in the mountain range also shed light on government indifference to conservation.

Manoj Kumar, a forest officer in the Dandeli Anshi Tiger Reserve, explained that apart from eating up large swathes of forest, dams also block wild animals’ migration paths. “This could lead to inbreeding, which results in local extinction of some species,” he said.

The mountain range is also a sanctuary for a slowly growing tiger population, though the endangered animals are far from being entirely safe.

Signs of increasing tiger presence have prompted calls for notification of the Kudremukh forests as a tiger reserve. A future Kudremukh Tiger Reserve could create a corridor for wildlife migrating from the nearby Bhadra Tiger Reserve.

According to a 2010 study by the WII, the Western Ghats hosts almost a third of the tigers in India. “Around 534 (tigers currently live here), (indicating) a rise of about 32 percent since 2006,” the report stated.

A previous report by the WII identified one corridor in the Western Ghats, the Nilgiris Biosphere Reserve, as one of the potentially sustainable landscapes for long term in situ tiger conservation.

Apart from tigers, other carnivores in these thick jungles include leopards, black panthers and the Indian wild dog. Rare and endangered wildlife include the lion-tailed macaque and fresh water otters and dolphins.

A black-coated feline in the Anamalai Tiger Reserve is yet to be identified by the scientific community. However, tribals and communities dwelling in the forest fringes have established that a black skinned carnivore, distinct from the Black Panther, has roamed the forests for centuries.