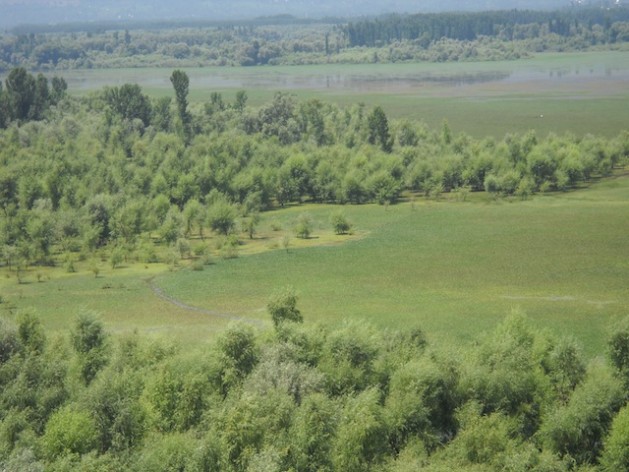 Willow plantations inside the Wular lake have choked its ecology. Credit: Manipadma Jena/IPS

The 46-year-old president of the Wular Valley People’s Welfare Forum is in high demand as an activist and organiser – he cannot allow the long power outages in northern India’s Kashmir Valley to cut off communication with his constituency.

The Forum was set up earlier this year to protect livelihoods dependent on the massive Wular Lake located in Kashmir’s Bandipora district, a wetland of international importance protected under the Ramsar Convention, following plans to begin conservation work in the area.

“This is critical for enhancing Kashmir’s hydropower generation, besides helping the lake regain biodiversity and improving local livelihoods.”

But this is easier said than done. Local leaders like Dar will have a hard time reconciling the many competing claims of community members, conservationists and politicians, all of whom see the lake as a site of immense economic, environmental and strategic importance.

Villages of 300 to 2,500 people around Wular that IPS visited endure power cuts that last up to 18 hours a day. Peak power availability in the Kashmir valley is less than one tenth of residents’ demand, and even lower in winter, according to experts.

Despite a 20,000-megawatt hydropower generation potential, Jammu and Kashmir’s installed hydroelectric capacity – which accounts for 81 percent of total power supply – is only 758 megawatts, according to the Jammu and Kashmir State Power Development Corporation.

The first, the Lower Jhelum and Uri Phase I, constitutes 80 percent of the State’s total installed hydropower capacity. Uri requires 8000 cusecs of water but gets just 2000 cusecs in the October-February lean flow period, producing only a quarter of installed capacity.

Similarly, the 240-megawatt Uri Phase II installation, when complete, will be critically in need of water from the Wular.

Its water holding capacity has fallen by one fifth in the last 30 years, owing to siltation, at an alarming rate of 2,470 acre-feet annually, according to the Delhi-based Wetland International South Asia (WISA)’s comprehensive management action plan report for Wular lake.

Fragmentation of the wetland’s marshy spread, reclamation for rice cultivation, degraded catchment areas and 27 square kilometres of willow planted over the period of a century inside the lake for the purpose of flood-control are all factors responsible for Wular’s ecological crisis.

With marshlands reduced by 70 percent and fragmented by flood protection embankments, the natural pattern has been reversed – the lean season now retains water instead of releasing it, power installations idle, and summer flashfloods and winter droughts have become common.

Dredging the lake is therefore an urgent, but by no means an easy, task.

“Before the 27 million cubic metres of silt can be removed, first the two million willow trees spread over 27 square kilometres need digging out by their roots from the water,” Khan told IPS.

Though the conservation effort is crucial to energy security, it could have short-term negative impacts for locals who have traditionally relied upon the lake for subsistence.

Half of the lakeshore population in 31 villages that are affected by Wular’s conservation project lives on less than two dollars a day, according to WISA.

Dependent on fisheries and picking water chestnuts and lotus roots (a gourmet delicacy), their incomes have plummeted with Wular’s degradation.

Once dredging begins they will lose even the measly income they have.

Voicing the collective concerns of the community, Dar told IPS, “Inaugurating the project, chief minister Omar Abdullah assured us work, but we are apprehensive about whether we will really get much.”

“For the six-million-rupee (less than one-million-dollar) boundary demarcation only three villages got work, that too only after we protested,” added 38-year-old Abdul Razak Pahloo of Saderkoot Payeen village.

“Villagers have already collected one million rupees (18 thousand dollars) to bring a legal stay order if project work that villagers are capable of doing is given to outsiders,” Sameer Ahmad Hanji of Banyari village told IPS.

“Our Forum can (absorb) labour contracts worth up to four million rupees (72,000 dollars), but officials say the contracts would more likely be in the range of 40-50 million rupees (0.72-0.90 million dollars) each,” according to Dar, suggesting that large companies will attempt to contract their own, external labour forces capable of carrying out every aspect of the project.

Simmering tensions between India and Pakistan over the 1960 Indus Water Treaty (IWT), an offshoot of the bloody partition of India in 1947 and a major bone of contention between both sides, could escalate and pose hurdles to the conservation effort.

Analysing last month’s grenade attack on the Wular project, where work has since resumed under police protection, Indian intelligence agencies say Pakistan may be harbouring fears that under the pretext of conservation, India will make a fresh attempt to begin construction on the Tulbul project – a 400-foot-long dam with sluice gates to regulate water flow to hydropower installations.

Pakistan’s objections halted the project mid-way in 1987 and officials have, since 2010, expressed fears that India may exercise a strategic advantage by regulating the dammed waters during war.

However experts think such cross-border complaints will have no legs to stand on. “Pakistan cannot object to the dredging because it is a conservation measure for a wetland under the Ramsar Convention to which Pakistan is itself a signatory,” Khan told IPS.

Under IWT, Pakistan has full rights to the headwaters of the Indus and its western tributaries, Jhelum and Chenab in Kashmir, whereas India gets rights to the natural flow of water, but not to storage.

“The conservation work in no way contravenes the IWT and Pakistan will in no way be affected,” Khan added.