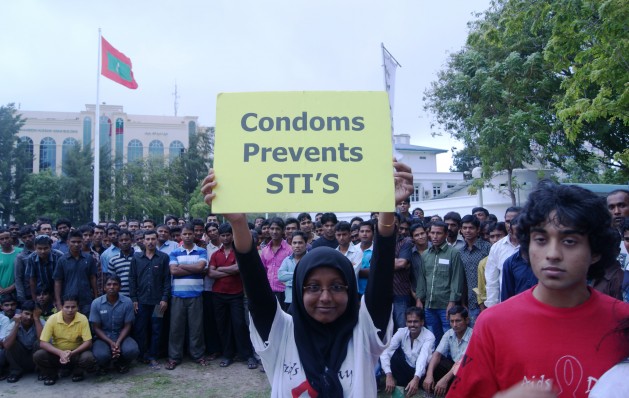 MALE, Sep 22 2012 (IPS) - For an orthodox Islamic country, the Maldives has made remarkable progress in halting the spread of HIV in the Indian Ocean archipelago through bold awareness programmes and the distribution of condoms.

A few years ago, condoms were available in the Maldives only at drug stores and on production of a doctor’s prescription. Anyone found carrying a condom in the streets  was liable to be arrested by police.

But, a five-year project mounted by the Global Fund to Fight AIDS, Tuberculosis and Malaria (GFATM), reports progress in creating awareness of safe sex issues and the use condoms by providing them free. The GFATM is supported by the Bill and Melinda Gates Foundation.

The GFATM programme in the Maldives addressed the sexually active among the 300,000 Maldivians, but focused on the 110,000 foreign workers in the country – mostly Bangladeshis, Indians and Sri Lankans employed in construction and in the country’s famed luxury resorts.

“We did a lot of work in the five years of the programme, which ended in August,” Ivana Lohar, HIV/AIDS project manager at the United Nations Development Programme in the Maldives, told IPS. “We believe that one more round of global funding would help to sustain the momentum.”

The challenge, Lohar said, is to ensure that the Maldives remains a low HIV prevalence country despite the presence of high-risk groups. As of December 2011, only 15 HIV cases were reported among Maldivians, while there were 289 cases among the foreign  labour force.

At the spanking new Voluntary Counselling and Testing Centre set up in the heart of capital by the Society for Health Education (SHE), a local non-government organisation (NGO), both local residents and foreign workers can avail of the free services.

Asna Luthfee, programme associate at SHE, says her work has included training 40 migrant workers as peer educators to promote awareness at hotspots where foreign workers congregate and provide condoms on request.

SHE offers a range of services through a sexual and reproductive health clinic, including screening for thalassaemia, DNA testing, counselling and psychosocial support. “We distribute oral pills, emergency contraceptives and condoms. We don’t ask people whether they are married or not – we distribute on request,” Luthfee said.

“There is also counselling if testing for HIV shows positive, and these cases are referred to the government,” Luthfee said. The programme, in which SHE and UNAIDS are partners, has been successful enough to be seen as a model for the region, she added.

Mohamed Yahiya, an accountant from Bangladesh who also works as HIV peer educator, said a government decision made earlier in the year to allow workers who contract HIV in the country to stay on and get free treatment, has helped immensely.

“Many were scared to talk about their HIV status fearing deportation, but the new government guidelines have eased those concerns,” he said. Foreign workers, however, undergo mandatory testing on arrival and those testing positive are refused entry.

The campaign has had its ups and downs because of pressure from the public and  religious groups that accused organisers of promoting promiscuous sexual behaviour.

“Though religion has its own inhibitions, Maldivian society is open and able to understand the need for awarenesss,” says Lohar. “We are not trying to interfere with religious beliefs, but flagging a serious public health issue. AIDS is a devastating condition that can impact the economy.”

A spokesman (officials may not be named under briefing rules) for the National AIDS Programme (NAP) said stigma and discrimination are still prevalent and public surveys in 2008 and 2009 showed that them to be  barriers to effectively addressing HIV and AIDS.

The UN-funded Biological and Behavioural Survey on HIV/AIDS – 2008 had noted that the potential for HIV transmission is “accelerated by non-use of condoms and the sharing of unsterile needles and syringes among injectors.”

Unprotected sex is high in all the risk groups. Aside from the risk behaviours themselves, a growing concern is the early age at which commercial sex and injecting drug use start in the Maldives, the study found.

The Maldives, warned the report, “is showing signals of a possible future epidemic which need to be closely monitored by the national programme, including injecting drug use in prisons and rehabilitation centres and risk behaviours found among the 18-24 year age group (selling and buying of sex, group sex, male-to-male sex, sex with non-regular partners, and injecting drug use).”

The NAP spokesman said that religious groups and scholars are supportive of public health efforts to prevent diseases and in this context using condoms is advised. “Prevention efforts are well supported by the religious scholars, and recently they have been involved as partners in HIV prevention work,” he added.

A major component of the programme was the conduct of migrant fairs where free testing for HIV/AIDS was provided. The latest of these fairs, which was held in August,  had collaboration from  government agencies, embassies and high commissions.

“Workers are provided information in their own language and when they return to their home countries they go back armed with knowledge on health issues,” said Yahiya.