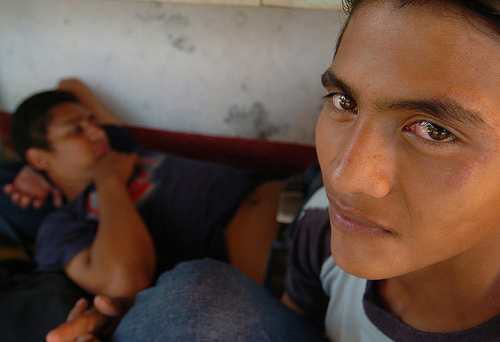 Thousands of Central American minors, like this 16-year-old Guatemalan migrant, make the dangerous journey across Mexico every year in the attempt to reach the United States. Credit:Wilfredo Díaz/IPS

SAN SALVADOR , Oct 1 2012 (IPS) - For many undocumented child migrants from Central America, Mexico is the end of the road in their endeavour to reach the United States, driven by economic reasons, gang violence and domestic violence.

“Children have always migrated, and they have always been the most vulnerable,” Mexican academic Carolina Rivera, of the Centre for Research and Higher Studies in Social Anthropology (CIESAS) in Mexico, told IPS.

Since the flow of Central American migrants to the United States intensified in the 1980s due to the civil wars lashing the region, family breakdown has become a bigger and bigger problem. Parents leave in search of a better future and leave their children in the care of grandparents or other relatives.

According to estimates by the U.S. Department of Homeland Security, around 15 percent of the 11.5 million undocumented Latin American migrants in the United States are from Guatemala, Honduras and El Salvador.

Added to the need for family reunification and the traditional economic reasons are other motives, like domestic violence, driving children and adolescents to leave the region, said Rivera, who has experience in the field with Central Americans in Mazatán, in the impoverished southern Mexican state of Chiapas.

Rivera said her research project found girls who had been beaten or raped by stepfathers or other relatives, prompting them to travel to the United States without documents.

She also found young Hondurans and Salvadorans who, upon coming out to their families as gay, were mistreated and ultimately thrown out of their homes.

Intra-family violence was a recurrent feature, said Rivera, who was a keynote speaker at a recent forum about migrant children in San Salvador.

There were 1,028 complaints filed of intra-family violence in El Salvador between January and June, nearly twice as many as the cases reported in the whole of last year, according to the national police.

When they are detained in Mexico, Central American children have few options: they can be deported, or they can live in this country and put up with constant violations of their rights.

Statistics from Mexico’s National Migration Institute (INM) indicate that between January and July, 3,391 Guatemalan, Honduran and Salvadoran children were deported, 50 percent more than in the same period in 2011.

Of these, 2,801 were unaccompanied, showing how vulnerable these migrant children are. Many of them are abandoned to their fate by “coyotes” or people smugglers.

“Many of them are caught up in human trafficking networks,” Jaime Rivas, the coordinator of the migrations programme of the government’s National Directorate of Investigations, told IPS.

“Things are no longer as they were when ‘coyotes’ were heroes who helped people reach the north. Now it is human trafficking networks linked to organised crime that move migrants,” he said.

An INM communiqué released in early September said many children were fleeing youth gangs in the violent northern countries of Central America, which force teenagers to join. If they refuse, they may be killed.

In El Salvador alone there are an estimated 60,000 gang members, belonging to the MS-13 (Mara Salvatrucha) or Barrio 18 gangs.

The report “Captured Childhood,” published in June by the International Detention Coalition (IDC), a human rights organisation with member groups in 50 countries, says that regardless of the conditions in which children are kept in detention for trying to cross a border, “detention has a profound and negative impact on children.

“Children are at risk of suffering depression and anxiety, as well as from symptoms such as insomnia. It undermines their psychological and physical health and compromises their development,” the report says.

The IDC says that undocumented children should not be detained, and recommends that governments create public policies for their protection.

In April 2011 Mexico approved a new migration law which, in principle, guarantees the human rights of foreigners in transit through its territory. But it is not yet in force because its detailed regulations have not been drafted.

Those who choose to stay in Mexico without documentation are exposed to extreme vulnerability in terms of labour conditions, Rivera said.

Her research found that 33 percent of child migrants worked in agriculture, often putting in long work days for below average pay.

A further 16 percent work in the service and entertainments sectors, especially Honduran and Salvadoran girls aged 15 to 17, who work as dancers in night clubs and are subject to sexual abuse. “Many of them feel enslaved and are unable to leave that milieu,” said Rivera.

These young women would prefer to work as domestic employees, but in that area of Mexico Salvadorans and Hondurans are stigmatised as home-wreckers, and indigenous Guatemalan women are hired instead, Rivera said.

Finally, the research found that 17 percent of migrant children and adolescents work as street vendors, and the remainder perform a variety of activities in the informal economy.

Only six percent of the teenage migrants had any higher education, and just two percent had taken some university courses.